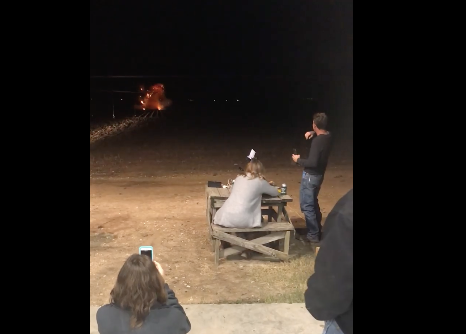 The family of Kimberly Santleben-Stiteler set up the wedding dress hours before she blows it up for her party. Image: Facebook/Carla Santleben-Newport

WATCH: Woman blows up wedding dress to celebrate her divorce

One woman in Texas held a party after her divorce was finalized. And what was the grand finale she chose to end her celebration? Blowing up her wedding dress.

Kimberly Santleben-Stiteler gathered her family and friends for the celebration held at her father’s farm on Saturday night, Nov. 10. This comes after she finally got divorced from her husband of 14 years.

Santleben-Stiteler’s sister, Carla, shared a video on her Facebook showing how the dress was blown up, with partygoers heard cheering

“I wanted to remove all things from our marriage from our house,” Santleben-Stiteler told The Fort Worth Star-Telegram. “Photos in the attic, ring in the safe (but probably going to sell it) and the dress I wanted to burn.”

Although she received suggestions from friends and family to donate the dress, she said she was determined to burn it. “[T]o me, the dress represented a lie,” Santleben-Stiteler said in the report.

She had some help from her father and brother-in-law, who provided explosives. To blow up the dress, $200 (around P10,600) worth of Tannerite — or exploding rifle targets — was used.

Santleben-Stiteler said that she had to practice to aim for the dress, since her family was not sure if blowing up the dress from 100 yards was safe enough. Apparently, she was successful by hitting the dress with just one shot. Katrina Hallare/JB