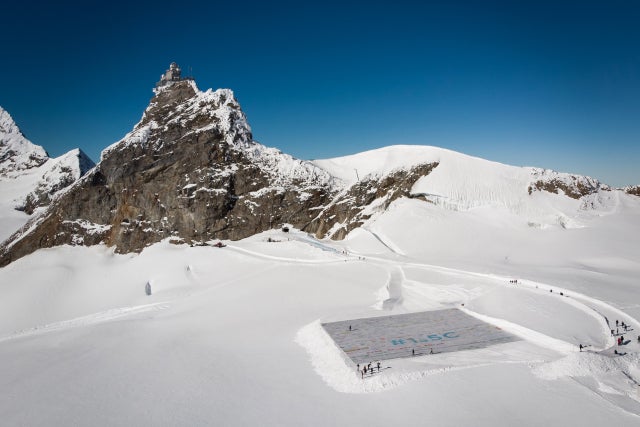 An aerial view shows a massive collage of 125,000 drawings and messages from children around the world about climate change seen rolled out on the Aletsch Glacier. Image: Fabrice COFFRINI / AFP

A massive collage of 125,000 drawings and messages from children around the world about climate change was rolled out on a shrinking Swiss glacier Friday, smashing the world record for giant postcards.

The event aims to “boost a global youth climate movement ahead of the next global climate conference (COP24) in Poland”, next month, said the WAVE foundation, which organized the event in cooperation with Swiss authorities.

The display easily set the Guinness world record for the number of postcards strung together in a single image, beating the last record held by a collage of 16,000 individual postcards, WAVE said.

The individual postcards feature children’s drawings in different colors and hues of white, which together spell out the messages: “STOP GLOBAL WARMING”, “WE ARE THE FUTURE GIVE US A CHANCE” and “#1.5C”.

The last message refers to the maximum level of global warming that scientists say should be aimed for if the planet is to remain liveable.

However, a UN climate report last month warned that drastic action was needed to prevent Earth from hurtling towards a far sharper rise in temperature.

The Intergovernmental Panel for Climate Change (IPCC) said the globe’s surface has already warmed one degree Celsius (1.8 degrees Fahrenheit) over pre-industrial levels —enough to lift oceans and unleash a crescendo of deadly storms, floods and droughts — and without action is on track toward an unbearable 3C or 4C rise.

“Children and young people have a key role to play if (the 1.5C) goal is to be achieved, both as generations that will suffer from the consequences of climate change for a long time and as a force for concrete action,” the Swiss Agency for Development and Cooperation (SDC) said in a statement.

To commemorate the Guinness world record, “a postcard will be designed and printed to dispatch the young people’s words to the four corners of the globe,” SDC said. It said some of the postcards would be sent from the world’s highest post box on the Jungfraujoch peak, which overlooks the Aletsch glacier, to participants in the COP24. NVG