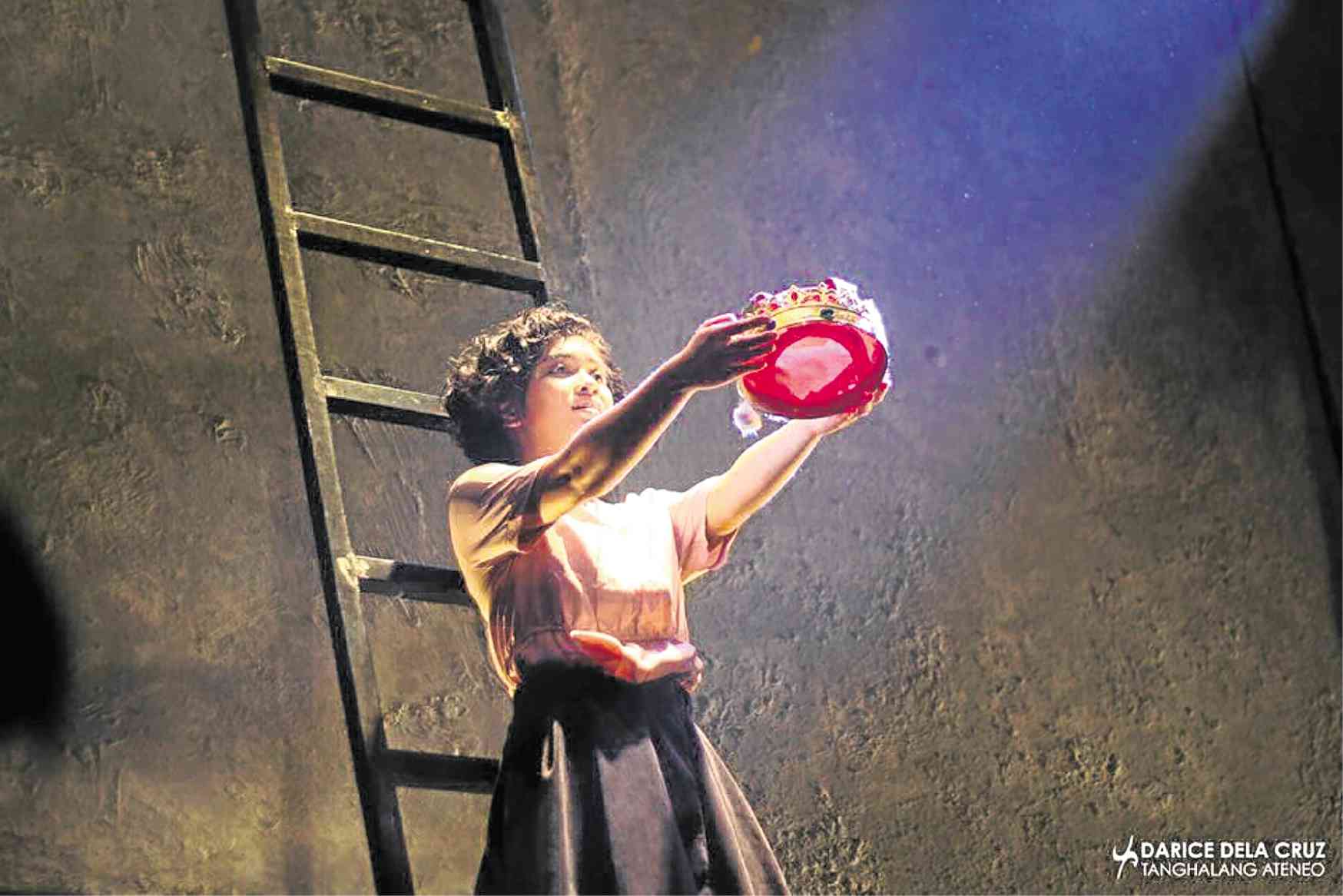 Tanghalang Ateneo’s “Marisol” sees the title character (played by CJ Lubangco) attempting to navigate an increasingly surreal, apocalyptic wasteland, as the guardian angels of the world stage a revolution against God.

Originally penned by Puerto Rican playwright Jose Rivera and translated into Filipino by Rody Vera, the production has no shortage of moments of staggering beauty, carried out by its committed cast.

However, as intellectually stimulating and aesthetically daring as “Marisol” is, it has difficulty converting its themes into emotionally resonant ideas. Rivera’s script—intentionally confusing and illogical, to better capture the crushing weight of war and poverty—requires a treatment that communicates its themes in a way that can be felt on a human level.

To its credit, TA’s interpretation has all the right tools at its disposal. Set designer Mark Dalacat and lighting designer D Cortezano effectively transform the venue into the bottom of a pit, with collapsible walls opening up to the surrounding darkness and only a ladder to signify hope.

Director Erika Estacio and choreographer Gabo Tolentino maximize the small square space, staging frantic pursuits from one corner to another and making long walks around the perimeter feel agonizing and lonesome.

But this intelligent use of space can carry “Marisol” only for so long. As it grinds into the second act, the play struggles to wield its elements in a purposeful way. The production treats each of its individual elements with the same, constant dead-seriousness, preventing itself from becoming more interesting than the sum of its parts.

The supposedly triumphant reappearance of a crown encased in glass comes across more as an afterthought. Makeshift rocks handed to members of the audience during the intermission (presumably to be thrown into the pit later on) are never actually properly cued in. And the deaths and twisted fates of several characters are more curious occurrences than outright tragedies.

The problem with “Marisol” is not that it’s difficult to understand or more demanding than the typical production. If anything, it’s exciting that a campus organization like TA is challenging itself and its audience this way.

The problem is that the result of all of its ruminations is surprisingly distant and dispassionate. Marisol and the other characters aren’t people so much as they’re vessels of suffering—certainly not the most encouraging depiction of the victimized poor.

Still, “Marisol” offers a lot to chew on for those who are willing to put in the work. One feels a warped curiosity watching Marisol’s world crumble around her, and it becomes impossible to look away, no matter how confusing the situations get.

The nightmare scenarios that Rivera thinks up are wildly imaginative: The moon disappears from the sky; men become pregnant; and Marisol hears of her own death on the news.

As the boundaries of society and reality collapse, war becomes the great equalizer, reducing everyone to his base instinct for survival. It isn’t the most nuanced apocalypse, but the play still allows for the rare touching moment between human beings.

That the production still finds a bit of feeling in Rivera’s wasteland is mostly a credit to the actors, who have wholeheartedly accepted the play’s madness and made it as accessible as they can.

Riki Angeles and Ethan Manalo (as June and Lenny, respectively) deftly communicate their characters’ broken family history in no time at all, while Earvin Estioco’s appearance as the Man with Scar Tissue is unexpectedly moving.

But it’s Lubangco who ultimately keeps Marisol afloat, taking the title character through such a gradual and studied transformation that you almost don’t notice when the world has gone to hell. In her performance, everything slowly begins to make sense. —CONTRIBUTED