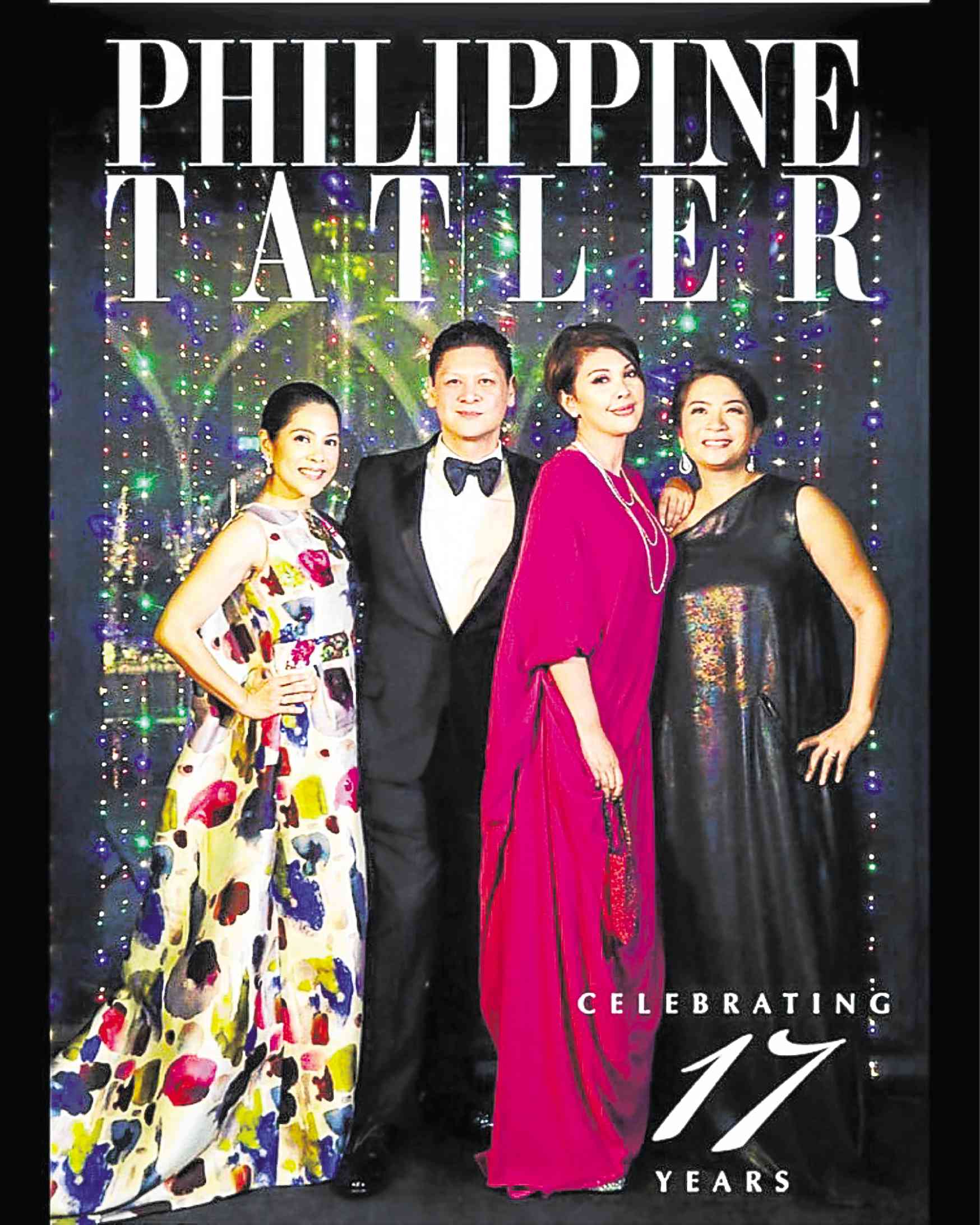 The tough challenge of keeping print from completely transforming into a digital future is a continuing battle. I believe the synergy between print and digital may be the key element to keeping both alive.

Anton San Diego, editor in chief of Philippine Tatler, remarked on the abundance of print at the 17th Philippine Tatler Ball, the by-invitation-only ball attended by almost 500 guests at Shangri-La at the Fort. It was an evening of celebration and purpose by the country’s top luxury lifestyle magazine.

The Tatler Ball is where a few exemplary individuals are honored every year. The ball is also a fund-raiser and this year’s beneficiary was the MovEd Foundation, which provides enhanced early education for underserved 3- to 5-year-old children.

As of this writing, more than P9 million has been raised through donations and the charity auction.

As Irene acknowledged, the event could not have been possible without the wonderful support of the ball’s main partners, Mercedes-Benz and Santos Knight Frank, as well as HSBC Premier, Albany Megaworld, Simmons and Sunseeker Yachts.

Much-deserved recognition went to seven awardees: Rajo Laurel for Most Creative Force, Lucy Torres-Gomez for Most Stylish, Donnie and Crickette Tantoco for Couple of the Year, Margie Moran Floirendo for Patroness of the Arts and Jewelmer’s Manuel Cojuangco and Jacques Branellec for The Diamond Award.

Yet another highlight of the evening was the performance of “American Idol” star Jessica Sanchez, as well as a surprise auction for a date with heartthrobs Matteo Guidicelli and Derek Ramsay.

While the surprise auction served to whet the generous crowd’s appetites to bid, the other exciting auction lots included a classic Jaeger-LeCoultre watch from Lucerne, a contemporary oil-on-canvas piece by Ayka Go, a safari for two from A2A Safaris, and a trip to Paris for two via Cathay Pacific Business Class packaged with a romantic two-nights’ stay at Château Bagnolet.

I wore one of the stunning creations of fashion designer Rajo Laurel from the Red Charity Gala collection. It was a metallic terno armor top with a big tulle ball skirt.

I did a quick change straight from my Cebu flight where I attended the Usana Cebu office opening. I actually dressed up in the lobby of the hotel because my outfit wouldn’t fit in the car!

Like the Tatler Ball, Red Charity Gala is also grateful to many sponsors who support by donating auction items to generate more funds for the different charities.

Lucerne, A2A Safaris and Jewelmer have been supporting us for many years now. The safari package from A2A Safaris was won by generous doctor couple Z and Aivee Teo.

The former musical director of Hong Kong Disneyland, Rony Fortich, put his amazing talent, elegance and charisma into one incredible concert that kicked off the holiday season.

Through the years, Rony has been privileged to work with many talented singers and recording artists. For this concert, he took the stage once more with his talented friends: Sweet Plantado Tiongson, Ring Antonio, Gian Magdangal and Joshua Tiu.

Produced and organized by Rony’s partner, businessman Jonjon Rufino, and philanthropist Rocio Olbes-Ressano, the concert was a smashing success, with the audience at Maybank Theater singing along most of the way. The show ended with a standing ovation.

Debuting her musical talent in “Rony’s Company Call,” young composer and flutist Anya Lagman performed her original composition, “Demain dès l’aube,” for the opening number. Parents Mike and Charmaine Lagman were so proud of their daughter.

Surprise singer Stephanie Kienle Gonzalez delighted guests with her duet performance with Rony. Her second number was a Christmas song that she dedicated to her cute daughter Andrea.

My Thanksgiving week was celebrated with several pocket events with friends in the beauty and art world.

In 2017, Art Bar and Noteworthy were founded with a vision to fuel creativity, self-expression and the pursuit of passions. That vision led siblings Anton Ramos and Xandra Ramos-Padilla of the National Book Store empire to expand to new locations—including an Art Bar in Quezon Avenue, a Noteworthy in Podium, these stores in Power Plant Mall and soon in Alabang Town Center and One Bonifacio High Street.

For their new branches, they invited friends and artists of all mediums to an intimate dinner that chef Happy Ongpauco-Tiu deliciously prepared. The small gathering was a showcase of the very special, personalized experience offered by Art Bar and Noteworthy.

We have much to be grateful for and we only wish to share those blessings to many.