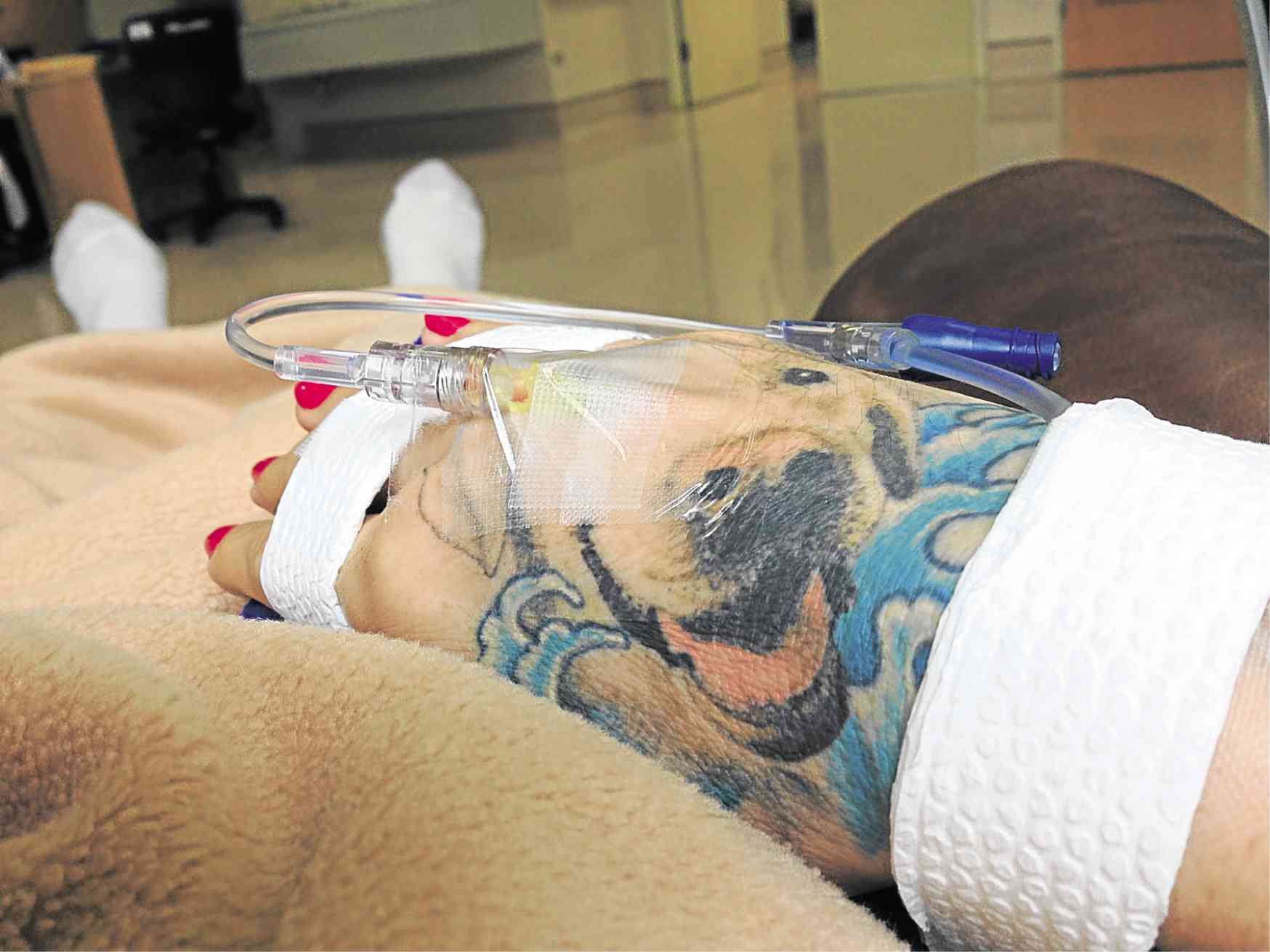 The author receives intravenous chemotherapy through her tattooed right hand in 2013.

Like most diagnosed cancer patients, I was apprehensive about chemotherapy in 2013.

Although I had a strong constitution, had prepared myself by eating healthy (juicing, supplements), and wasn’t too worried about losing my hair, the horror stories about nausea, vomiting and weakness I had heard from friends still lingered. “I wouldn’t wish chemotherapy on my worst enemy,” one survivor I had interviewed told me.

It helped immensely that my oncologist, Dr. Charity Viado Gorospe, who had been introduced to me by a friend, made it seem like a walk in the park.

She told me that this combination would offer a 94-percent chance of success—“because there’s still no such thing as 100 percent,” she declared then.

I remember listening in silence as she went through the details on her iPad, speaking slowly and clearly.

After that was out of the way, though, “Doc Charity” was all smiles and keen observation. She never acted like she was fighting a life-threatening disease, but she also gave me sufficient warning.

Thus, I wasn’t surprised when the Cyclophosphamide took my hair, or when the Doxorubicin turned my urine pink—just pink, because some patients freak out when they piss red, probably thinking they are bleeding to death. Meanwhile, I gulped liters of buko juice to dilute the drug.

She also opted to divide my last four doses into two, halving the volume of Docetaxel per dose to minimize side effects. “There’s such a thing as cumulative dosing,” Doc Charity says, meaning that she also had to consider the effects of the previous sessions and drugs.

Indeed, I had been hearing more and more stories of chemotherapy being milder, or even optional, in our growing community of cancer survivors.

Among the latest technology is a MammaPrint, a test that analyzes genetic activity in patients with early-stage breast cancer. It’s now being used to determine the risk of recurrence within 10 years after diagnosis. A low risk rating will help patients and doctors decide if chemotherapy or other treatments after surgery are actually needed.

“There’s molecular testing to help doctors really find the right drugs,” says Doc Charity. “It’s pricey, but we get all the necessary information to make predictions—is it early stage? If lymph nodes are negative, will the patient still need chemo? Is it a small tumor? Do we go with chemotherapy or hormonal treatment?”

The amount and “cocktail” of chemotherapy, if needed, vary according to the nature of the cancer, Doc Charity says, as no two cancer cases are exactly the same.

“If you’re stage 1, unless you’re a high-risk stage 1, you’re in for a short period of chemotherapy. It may be given for a limited time as adjuvant therapy, when there is no gross disease to treat.

“After surgery, chemotherapy is there to prevent early recurrence and spread through metastasis, and to address micro-metastasis, the tiny cancer cells not seen by the naked eye, or which do not reflect in work-ups. That would be the cause of early recurrence.”

In the case of metastatic cancer, or when the disease has spread, systemic treatment is required, Doc Charity says.

“Chemotherapy can address not just the primary lesion, but also the metastatic sites. What kills the mom also kills the children that are housed in your body.”

For stage 4 cancer, there is no end point to chemotherapy, she notes.

“You stop when there is nothing to treat, when the patient is no longer able to tolerate the toxicities of drugs, when the disease progresses, or the cells become resistant. Remember that cancer cells are active cells that can mutate, especially after constant exposure to some levels of medication.”

That’s why Doc Charity warns against underdosing. “You would just be exposing the cells, and they become stronger and assume a different form. When you treat a patient, you should kill all cancer cells before they ever develop resistance.”

So why does chemotherapy seem less difficult nowadays, then?

“We now have so many drugs you can give side by side that will protect a patient from side effects, like nausea. There are many combinations. It’s now a mortal sin to see a patient vomit, with so many options available!”

Indeed, she had me covered with antacids, antihistamines, and anti-nausea medication—such that the most I really felt was drowsiness.

Then, there’s the all-important mind-set, Doc Charity says. “May mga sukahin talaga, mostly females, and you can almost predict who they are—you know, the ones who get dizzy on boats. That’s when you give aggressive treatment to cover a week of nausea.”

Some are so preconditioned, they even get nauseated at the sight of their doctor, she says with a laugh.

“For those who eat well and are fit, who cope well psychologically and are not depressed, the side effects are so much less.”

Cruz’s case was remarkable, Doc Charity says, as even a taxed heart improved with chemotherapy after the lungs cleared.

“The concern now is recurrence, so like all patients, he has to come for follow-ups. The first two years are the worst, as they have the highest rate of recurrence in that time, so we check the patient every three months. For years three to four, I make them comeback every six months; after five years, the rate of recurrence goes down to 2 percent.”

When Doc Charity is out of the country, she leaves patients in the able hands of her trusted oncology nurses; her well-loved secretary at St. Luke’s Global, Remy, is herself a cancer survivor who obviously didn’t lack for medical care.

Those trips aren’t vacations, however, but oncology conventions and meetings all over the world.

“It’s a requirement of St. Luke’s that you update your knowledge, but the primary reason I travel is for my patients. I don’t want a patient to come back and hear me say, ‘Wala na akong magagawa.’ I never want them to hear me say that.

“So I get whatever knowledge I can outside, especially since research and clinical trials are done there, and they have better data to show. We become part of the international scene.”

Oncology was an “accidental” route for this 1986 graduate of the University of Santo Tomas College of Medicine and Surgery, who initially wanted to go into internal medicine, “but no hospital accepted me. They thought I was too young. So I took it to mean it was not my path, and God was preparing me for something different.”

This, after she had to balance studies and caring for a sick mother after her father, the family breadwinner, died in a car accident.

A fellowship in medical oncology was offered “on a silver platter” at Veterans Memorial Medical Center by a favorite mentor, Dr. Valorie Chan, after seeing how Doc Charity worked with patients, the incredible bedside manner that marks her practice to this day.

“It was offered to me without too much assessment and evaluation,” she recalls. “It pays to have a good mentor—someone who inspires you, someone you want to be like,” she says of Dr. Chan.

Family
Now, she has two kids with husband Samuel Gorospe, Jonathan David and Julienne Dominique—both of them in medical school. “They want to repeat the mistakes I made!” she says with a laugh.

Samuel often accompanies her to conventions, the last being the European Society for Medical Oncology Congress in Munich, Germany, in October.

And, Doc Charity lives up to her name, waiving her fee for indigent patients and going the extra mile to find new treatment options for challenging cases.

The big question, then: When will we see a cure for cancer?

“Not soon, not in the next years,” Doc Charity states. “Cancer cells are as brilliant as humans. They learn to protect themselves, mutate into a different form, so that no drugs are able to control them. They form mechanisms to evade the heat of that drug.”

The lifesaver, then, is “screening, not just early detection. If you get it early, you may not even have to do chemotherapy. Chemo will not kill you; there will be toxicities, but not for the rest of your life.”