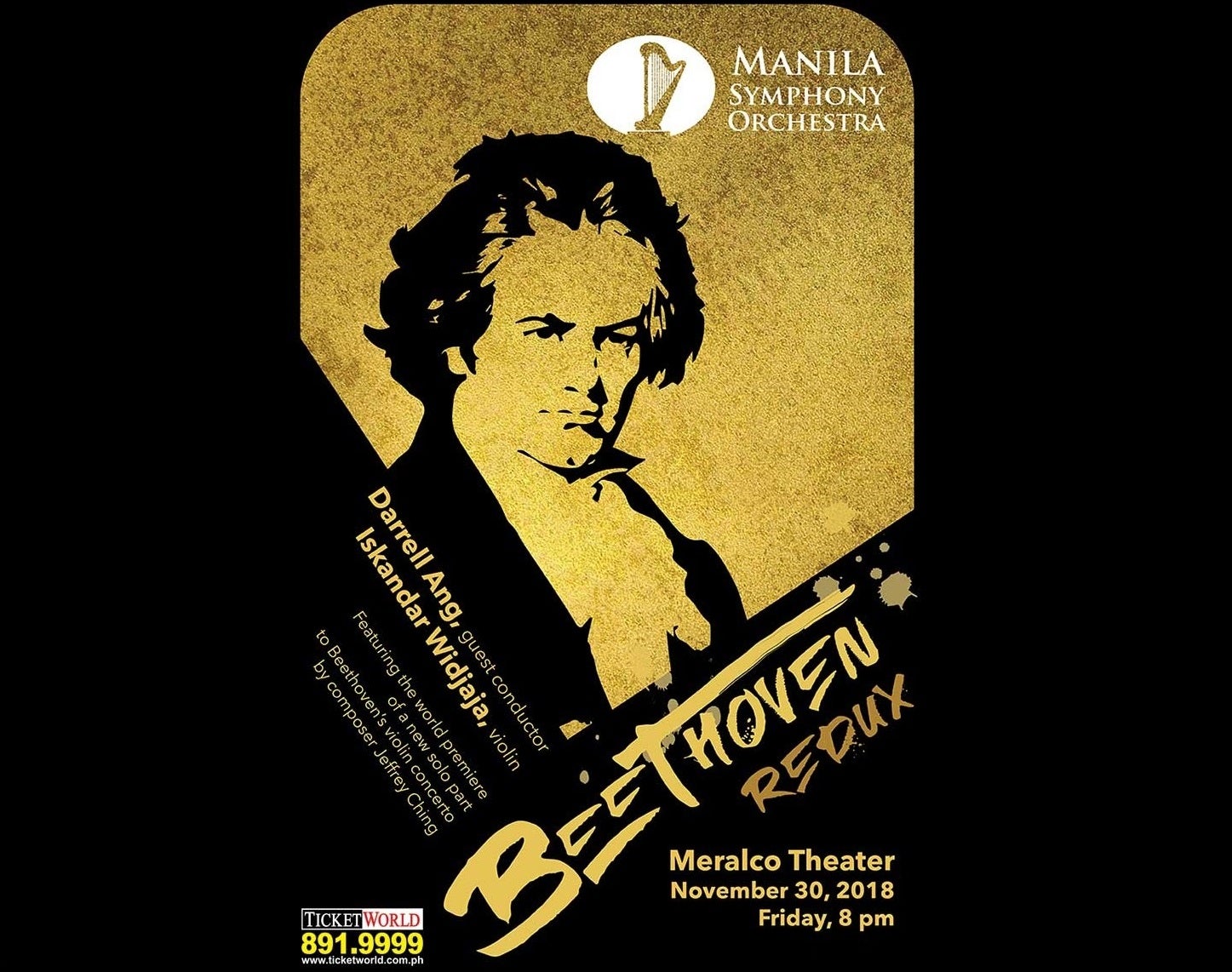 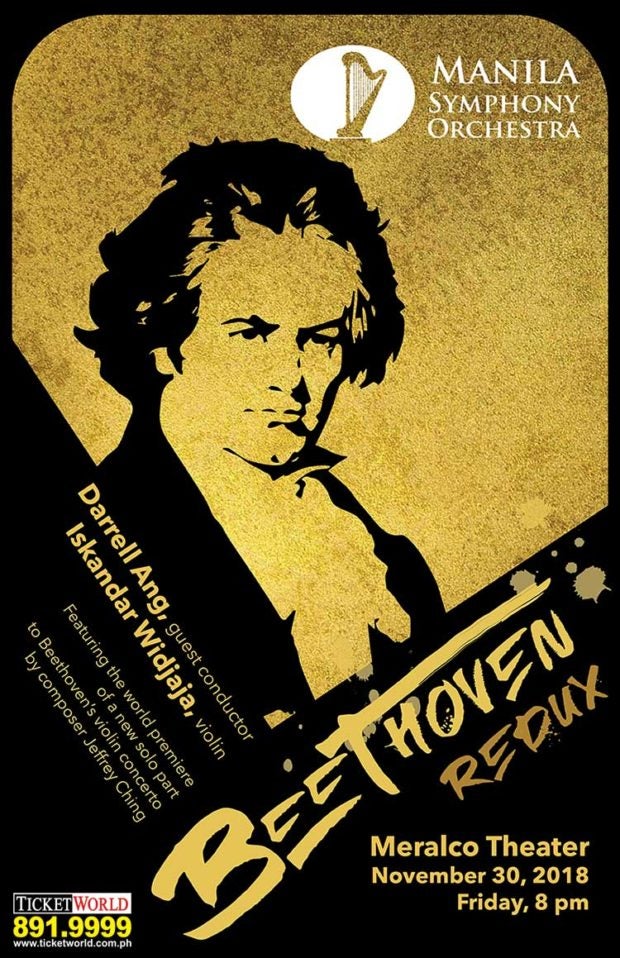 Ching explains, “Iskandar and I met at his MSO debut in 2017, and we quickly struck up a musical friendship (we turn out to be neighbors in Berlin) and immediately began exploring ways to collaborate. When he told me that the Beethoven concerto was the work he’s played most often, I immediately thought, that’s it, I’ll recompose his favorite concerto for him! Anyone who has seen Iskandar perform will know exactly what I mean. He combines absolute technical mastery and interpretive depth with a pop star’s stage persona that is entirely of our own time.

“I have used Beethoven’s autograph dedication as my title,” Ching continues. “It mischievously mixes French (par and pour) with Italian (clemenza) in a pun on the 1806 soloist’s name—Franz Clement. Thus, Out of Clemency for Clement. My clemency to a 21st-century audience results in Beethoven’s 50 minutes being reduced by about half. But I show no clemency to Iskandar. My version consists mostly of solo cadenzas that are really mini-fantasias on Beethoven’s themes, but quoted and combined in unexpected ways. These are punctuated by fragments of Beethoven’s original orchestration which appear in the wrong order.”

Widjaja was born in Berlin to Arabic-Dutch and Chinese-Indonesian parents. He has performed with internationally renowned ensembles such as the Deutsches Symphonie-Orchester and Konzerthaus Orchestra Berlin, the Munich, Warsaw and Shanghai Philharmonic, Sydney Symphony, Orchestre de la Suisse Romande, RSO Vienna and the Hong Kong Sinfonietta.

Simultaneously, he has developed a parallel show-biz career in east Asia, with regular TV appearances, commercial endorsement contracts, brand-ambassador duties and “trending topic” status (most mentioned term) on Twitter. Awarded many international prizes even as a teenager and while studying, he now collaborates with the great names of music such as Zubin Mehta, Christoph Eschenbach, Rolando Villazón, David Foster, Itamar Golan and Fazil Say. But he is also often to be seen at mass-media events like Miss World or Miss Earth, the Davis Cup, EXPO in Milan, the Fashion Week in Paris or the world premiere in Vienna’s Konzerthaus of the suite for violin and orchestra “Across the Stars” from Star Wars. His personality and energy are aptly summed up by the string players’ house magazine The Strad, in the following words: “Iskandar Widjaja, a true force of nature.”

Darrell Ang has been artistic director and chief conductor of the Sichuan Orchestra of China since December 2016, and is a regular guest conductor at the Mariinsky Theatre by invitation of Maestro Valery Gergiev. This season he returns to the NHK Symphony Orchestra, London Philharmonic with cellist Kian Soltani, Queensland Symphony with violist Antoine Tamestit, the Haydn Orchestra of Bolzano/Trento, Munich Radio, Barcelona Symphony, China National Symphony, and National Taiwan Symphony with Vienna Philharmonic Principal Flautist Karl-Heinz Schütz. He studied conducting in St. Petersburg with Leonid Korchmar and continued at Yale with Shinik Hahm. He took all three top awards at the 50th Besançon International Young Conductors’ Competition—the Grand Prize, Audience Prize and Orchestra Prize—leading to the Music Directorship of the Orchestre Symphonique de Bretagne (2012-2015). Three years later, he was selected to join the International Conductors’ Academy of the Allianz Cultural Foundation, taking on residencies with the London Philharmonic and Philharmonia Orchestra. Under the Naxos label, his first disc of Chinese composers was nominated for a Grammy in 2016, while other discs include best-selling albums of music by French composers.

Jeffrey Ching studied in Harvard, Cambridge (UK) and London, and now lives in Berlin. He represented the Philippines in three cultural delegations to China, was 1998 TOYM Awardee in Music and, in 2003, was the first composer to receive the Jose Rizal Award for Excellence from the Philippine president. In Germany, his opera Das Waisenkind won the Theater Erfurt Audience Prize in 2010, and was followed by his nomination for the prestigious Kyoto Prize. He has been featured in Neue Zeitschriftfür Musik and on the German radio stations rbb, DLF, DLR Kultur and MDR Figaro. His compositions have been premiered at the Deutsche Oper Berlin, the IMPULS Festival für Neue Musik in Sachsen-Anhalt (Germany), the Klang Zeit-Festival Münster (Germany), the Mendigorría International Music Festival (Spain), the ICon Arts Festival (Romania), the Edison Denisov Festival (Russia), the Shanghai Arts Festival, and the Hong Kong Arts Festival. He was composer-in-residence at the Tongyeong International Music Festival (South Korea) in 2010; the Mendigorría International Music Festival (Spain) in 2013, 2015 and 2017; and the Singapore International Festival of Music in 2016. In September 2017, his completion of Mozart’s unfinished Sinfoniaconcertante in A major was premiered by the world-renowned Dresden Staatskapelle. He is currently at work on three new operas.