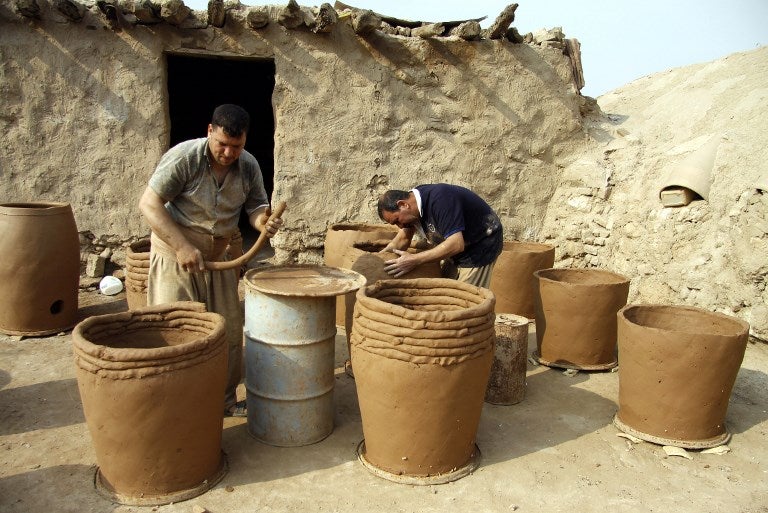 Iraqis making clay pots in Najaf on November 11, 2018. - Pottery has deep roots in Iraq, where ancient civilisations turned to clay to build their homes, shape their cooking utensils, and even make their ovens. (Photo by Haidar HAMDANI / AFP)

NAJAF, Iraq — Adel al-Kawwaz expertly spins the potter’s wheel, shaping the wet clay into a smooth jug. His family is famous for this millennia-old Iraqi craft, but Kawwaz is struggling to keep it alive.

For thousands of years, clay utensils for storing food and cooking were found in virtually every home in Sumer, the earliest known civilization in modern-day southern Iraq.

Kawwaz’s own family drew their name from the jug, or “kawz” in Arabic, which they have produced for more than 200 years from clay found at a lake by Najaf, a holy Shiite Muslim city.

“Making clay vases is a craft that my family had become famous for,” says 45-year-old Kawwaz wistfully.

Pottery has deep roots in Iraq, where ancient civilizations turned to clay to build their homes, shape their cooking utensils, and even make their ovens.

Cuneiform, one of the earliest forms of writing invented by the Sumerians, was also carved into clay tablets.

But now, with a flood of more modern products, demand for the handmade clay items has dried up, says Kawwaz.

His family’s jugs were shaped from Najaf mud, dried in the shade, then baked at high temperatures for no less than 15 hours.

In Iraq, one of the hottest countries on earth, they were indispensable.

“These vases were used to keep water cool or preserve food. They were placed in the shade or hung in another high location,” he says.

Some Iraqis even used them to store jewelry.

“Those that practiced pottery would make a lot of money because they were common items in ancient Iraqi households,” says Kawwaz.

They were surprisingly handy during the era of Saddam Hussein, when many families struggled financially, as well as in the 1990s, when international sanctions hit Iraq.

With household appliances extremely rare or unaffordable for most of the population, Iraqis once again relied on clay.

“The income of most families did not allow them to buy a refrigerator or freezer to keep their water cold, so most used clay cauldrons,” he says.

Back then, his family sold their large jugs in bulk — sometimes thousands per week across every Iraqi province.

But times have changed.

“We sell very few now — the numbers in an entire year don’t hit 100 or 200 jugs,” says Kawwaz.
Farmers who once used the large containers are opting for cheaper goods, made either elsewhere in Iraq or imported.

“They buy plastic bags imported from China, so now we rarely sell clay pots,” says Kawwaz in his studio, itself made of mud and covered in palm leaves.

He makes the vases by special request only, but admits it’s hardly worth it.

Small jugs cost just 2,500 dinars or around $2, while the larger cauldrons that hold several dozen litres (gallons) are sold at 15,000 dinars.

Battle of the bread

Despite the prevalence of electric and gas cookers, Um Haydar prefers her trusty clay oven.
On her rooftop terrace in Old Najaf, she uses it to bake her own traditional bread every morning.

“The taste of bread made in a traditional oven is so different from bread baked in an electric or gas oven,” says Um Haydar, as the searing oven near her radiates an enticing smell.

Well into her sixties, the Iraqi woman is dressed in a traditional black robe that covers her from head to toe.

Like her mother and grandmother before her, she has stuck to tradition when it comes to the clay oven, with one exception — she didn’t build it herself.

But some Iraqis, like Haydar al-Kaabi, insist on the full Sumerian experience.

On the edge of the Najaf Sea, Kaabi begins mixing together ingredients to make his own oven.

“To the clay, you have to add reeds, red sand, and synthetic wool fibers. You let the mixture rest for two days so the clay becomes compact,” he explains to AFP.

Despite the drop in sales, this potter is upbeat.

“Even if we sell less, even if the craftsmen are fewer and fewer, we’re fighting to keep the artisanal heritage of our fathers and grandfathers alive,” he says.

“And of course, there are still Iraqis who only eat good bread,” he says with a wink.