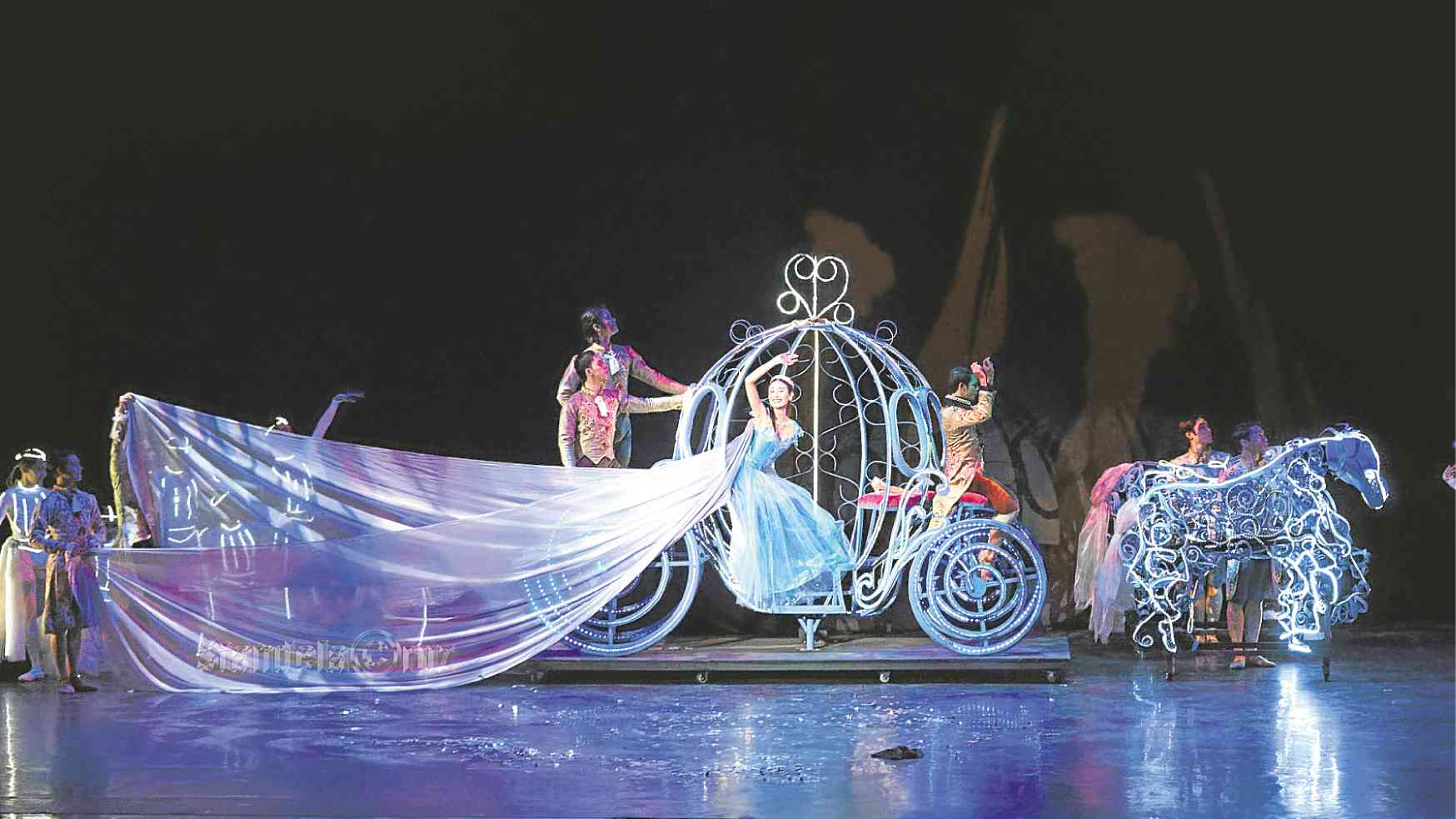 Abigail Oliveiro as Cinderella hies off to the ball. – STAN DELA CRUZ

After retiring from the stage, Lisa Macuja-Elizalde, artistic director of Ballet Manila (BM), found her voice in choreography. Backed by a strong creative team, she undertook the enormous task of creating her version of the popular fairy tale, “Cinderella,” in 2016. This year, it was restaged at the Aliw Theater, playing to a full capacity audience of over 2,400 for the last show.

It has been Elizalde’s vision to make ballet, an arcane art, appreciated by people who have no understanding or appreciation of the culture. Russian composer Sergei Prokofiev’s score can sound profound at times to the uninitiated. Hence, Elizalde worked with arranger Roy del Valle who picked up the salient parts from Prokofiev’s score and eschewed the weighty portions. He kept the music light, vibrant and familiar in the general mood of fairy tales and Disney movies by using other composers. One of the recurring musical themes in the ballet was “Ten Minutes Ago I Saw You,” which was sung by the Prince at the ballroom scene in Rodgers & Hammerstein’s “Cinderella” musical.

Catering to families with toddlers in tow, the ballet maximized the visual spectacle and attention-grabbers such as animals (performed no less than by BM’s principals and soloists) playing with an automated mouse; BM’s signature glow-in-the-dark costume; billowy fabrics that dramatized the props; Cinderella’s split-second change from rags to her elegant ball gown; a glittery ballroom; the Prince fitting the glass slipper on the feet of little girls in the audience and a floral bouquet that exploded into streamers.

At the royal ballroom, Cinderella met the Prince for the first time in a grand manner: They were both hoisted up by the dancers. As the time came to close to midnight, the ensemble filled the entire stage and moved their hands like clock mechanisms, prompting Cinderella of her curfew.

Abigail Oliveiro’s innocent face, fragility and long, expressive limbs made her perfect for the role. Likewise, Mark Sumaylo, the Prince, is gifted with a noble bearing and clean lines. They were physically well matched.

However, their pas de deux (additionally choreographed by Osias Barroso) in the ballroom scene was uneven. The supported multiple pirouettes were unstable and some transitions from one step to the next looked choppy. Still, the crowd didn’t notice those details. They cheered in the difficult lifts especially when Sumaylo held Oliveiro low to the ground and seamlessly hoisted her over his shoulder.

As the Fairy Godmother, Korean import Kong Ke Xin displayed lyrical quality which cloaked her powerful technique. John Rialp Balagot as the overbearing Stepmother didn’t go over the top, and the leggy Godwin Merano was natural and comic, playing dual roles of Dancing Master and the King.

Although “Cinderella” was a sure-fire hit because of the musical arrangement, the striking production design and a strong company dancing with vivacity, it would have been effective if the cast did their homework in acting.

In the first act, it wasn’t clearly established that Cinderella and the Stepsisters were picking mushrooms. Instead Cinderella made a grand entrance via split jump. Then again, Oliveiro’s expression seemed stuck at being Disney princess instead of the transformation from underdog to heroine. There wasn’t much emotional range whenever the Stepmother and Stepsisters were mean to her.

As the Stepsisters, Risa Mae Camaclang and Pia Dames showed brilliant technique, but their personalities were not clearly differentiated. Their acting turned out to be hammy. The comedic dynamic between the Stepmother and her daughters could still be explored.

Nonetheless, the audience gasped in amazement and applauded enthusiastically all throughout the ballet. Its appeal lay in the romance and the victory of goodness over nastiness, both facilitated by a generous spell of stage magic. –CONTRIBUTED