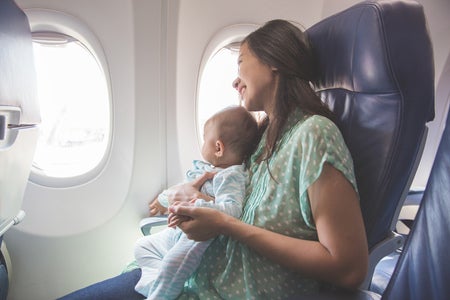 One American woman has gone on social media to express her gratitude to a man who gave his first-class plane seat to her and her infant daughter.

Kelsey Zwick recounted in an open letter on Facebook on Dec. 2 that she was on a window seat of an American Airlines flight from Orlando to Philadelphia with her 11-month-old when a flight attendant told her a man was willing to switch seats.

The unexpected, thoughtful gesture was one she appreciated because, on top of looking after her “yelling-but-happy” baby, she was also lugging around a stroller, an oxygen machine and a diaper bag.

She said even her own daughter seemed to be touched by the act of kindness. “Not able to hold back tears, I cried my way up the aisle while my daughter Lucy laughed! She felt it in her bones too… real, pure, goodness,” she recalled.

“I smiled and thanked you as we switched but didn’t get to thank you properly,” she said, only identifying him as “the man in 2D.”

The extra space was helpful for the mom and daughter who were able to enjoy perks such as a cheese plate and more room for the oxygen tank.

Zwick and her husband are parents to twin daughters Lucy and Eva who were born prematurely at 29 weeks. Both were underweight at birth, with Lucy weighing 2 pounds and 14 ounces and Eva 2 pounds and 5 ounces, as per Yahoo!

They both have chronic lung disease, but Lucy’s condition is worse than her sister’s: She still requires an oxygen machine and has to receive treatment every three months. She and her mom were en route to the Children’s Hospital of Philadelphia when they were on the flight.

The heartfelt letter on Facebook has over 450,000 shares as of this writing. The airline was able to connect her and the generous passenger, a man named Jason Kunselman, reported Inside Edition yesterday, Dec. 10.

When they got in touch with each other, she told Yahoo! News on Saturday, Dec. 8, that he thanked her for a birthday to remember and that he admitted that he and his wife teared up because of her message.  Niña V. Guno /ra

Street cleaner returns $22,000 she found in trash, refuses reward: ‘It’s what I should do’