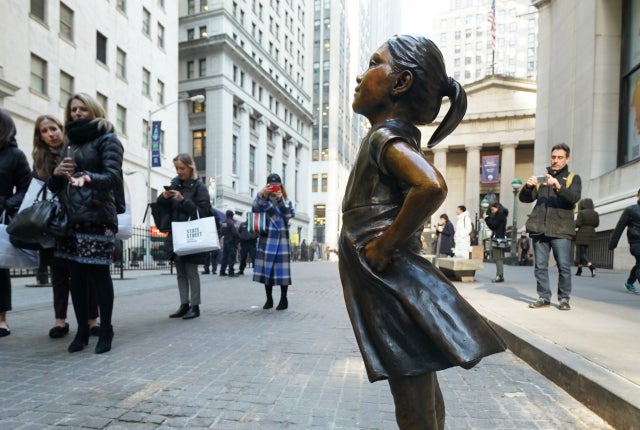 She may be diminutive in stature but the “Fearless Girl” is standing tall against sexism at her new home outside the New York Stock Exchange.

Nearly 200 people attended a brief ceremony for the unveiling of the statue, which appeared in New York’s financial district on International Women’s Day last March, and has since become a firm favorite with tourists.

The bronze statue — which stands at four feet (1.20 meters) — depicts a determined youngster with eyes locked on the exchange’s imposing facade: hands on hips, ponytail windswept.

In her previous location, she squared up to the “Charging Bull,” installed by financial firm State Street Global Advisors to make a statement about the lack of women on financial institutions’ boards.

Created by artist Kristen Visbal, the statue was originally not meant to remain for more than a week.

But its immediate popularity convinced authorities to keep it in place — despite grumbles from the creator of the bull, installed in 1989, who denounced her presence as an “advertising trick.”

“She says in one image all that advocates can say in pages and pages of arguments and statistics,” said Democrat congresswoman Carolyn Maloney during Monday’s ceremony.

“She is bold and self-confident and hopeful,” she added, describing the statue as a “central piece of leadership for the women’s movement.”

“We see (in her) our daughters, mothers, nieces,” added Betty Liu, vice president of the New York Stock Exchange, which in May named its first female president, Stacey Cunningham.

“She represents potential, progress and hope, but also all the women who have fought for equality before us.”

The “Fearless Girl” has made a name for herself worldwide: a replica was briefly installed in Dublin in November, while reports say she will come to London in March.

In the meantime, State Street officials are keen to point out that her tenure has come during an increase in women on company boards.

By the end of September, 215 US firms had added at least one woman to their board since 2017, according to State Street president Cyrus Taraporevala.

‘Fearless Girl’ statue is no longer staring down ‘Bull’