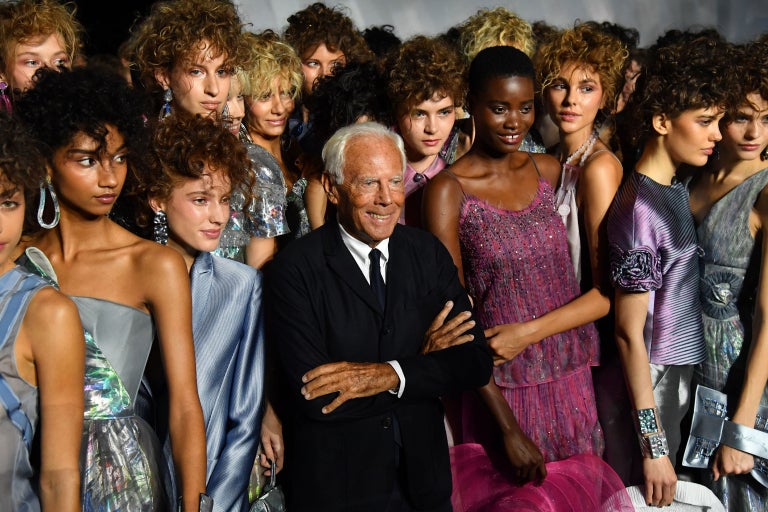 Italian fashion designer Giorgio Armani (C) and models at the end of the Armani fashion show, as part of the Women's Spring/Summer 2019 fashion week in Milan. Image: AFP/Andreas Solaro

Giorgio Armani to go for mixed shows next season

Giorgio Armani is the latest fashion label to go co-ed, presenting men’s and women’s collections at the upcoming fashion week for Fall/Winter 2019/20.

The Italian designer is forgoing Men’s Fashion Week in January in favor of a mixed gender catwalk show in Milan in February, reports WWD. However, he will still have a presence at the January menswear event, as he allegedly plans to put on an exhibition in his Armani/Silos space in the Italian city. His Emporio Armani brand will be present on the menswear runways.

Armani is the latest in a long line of designers to adopt a co-ed model, following in the footsteps of JW Anderson, Burberry, Stella McCartney, Valentino and Celine. However, some brands are returning to the traditional split-show calendar after testing out the concept. Givenchy, for example, recently revealed that it would return to the Paris men’s fashion week schedule for the fall/winter 2019-2020 season.

The move is the latest disruption to the previously structured fashion week schedule, as designers increasingly veer off-piste in a bid to remain relevant, cut down costs or drum up global followers. Tommy Hilfiger is one of the most prolific examples, with the United States stalwart abandoning the traditional calendar to stage his “TommyNow” shows all over the world, while Alexander Wang is also currently testing out an alternative catwalk schedule. Moschino is apparently the latest label to go rogue, with WWD reporting this week that the brand intends to host a special catwalk show for Fall 2019 menswear and Pre-Fall 2019 womenswear in Rome this January. JB

Stella McCartney goes even greener with new charter and charity