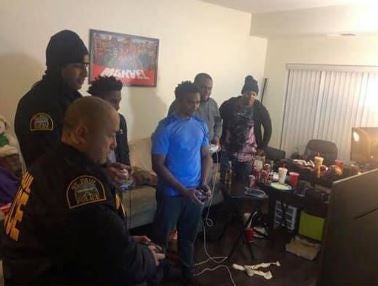 A group of friends from Minneapolis in Minnesota, United States were playing video games last Friday night, Dec. 7, when cops arrived to respond to a noise-complaint call from the neighbors.

Jovante Williams and his four other friends were playing crossover fighting video game “Super Smash Bros.” and having a few beers when a knock came on their door. Upon opening the door, Williams was met by Officer Isaac Palmer, who told him they did not hear or see anything crazy from the friends, as per Star Tribune on Dec. 12.

“We were not doing anything bad,” Williams was quoted as saying. “It was just beer bottles and us being nerds.”

Williams, at first, was concerned, citing unpleasant dealings with police officers in the past. The situation, however, took an unexpected and wholesome turn when Palmer, at one point, asked Williams what they were playing. It did not take long until Williams invited the officers in.

The scene was shared on Williams’ Facebook on Dec. 8 and showed a photo of the St. Paul police officers, Williams and his friends gathered in front of the television playing “Super Smash Bros.”

“So neighbors called the cops on us and now we fighting them… in Smash Bros,” wrote Williams.

SO NEIGHBORS CALLED THE COPS 👮🚓 ON US AND NOW WE FIGHTING THEM… IN SMASH BROS. #allhandsmatterFOLLOW ME ON INSTAGRAM/TWITTER AS @JoviJenovi FOLLOW MY PAGE TOO JoviJenovi

In one video, Williams can be seen panning the camera to his friends and the police officers, who were now inside the apartment.

“Our homies here, we got our other homies here,” Williams announced in the video. “We all about to play some Smash Bros.”

The group all had a ball, with Palmer losing to Williams in the end. Meanwhile, other police officers asked help from Williams, wondering how they can make their character “jump” in the battle arena.

“They were decent at what they were doing,” Williams said in the report. “It was fun. This is a happy experience I will talk about for a while.”

He also said that the experience was the most positive one he has ever had with the police: “This was something positive and wholesome. I made new friends with the cops.”

Meanwhile, Palmer shared that police officers are not always robotic. Sometimes, they just want to have conversations with other people.

“When we do a traffic stop we might just talk about the Vikings or the Final Four,” he said. “It’s not always about seeing people on their worst days. Sometimes you just have to have a conversation.” Cody Cepeda/JB