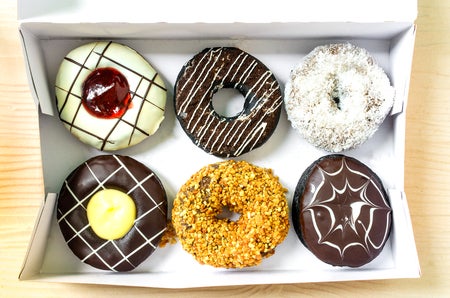 A delivery van carrying boxes and boxes of Krispy Kreme donuts was stolen recently in Lake City, Florida. It was later recovered on the same day, 193 miles away in Crest Lake Park, Clearwater by the Clearwater Police Department — and it was still full of its scrumptious contents.

The incident was shared on social media by the Clearwater Police Department on Tuesday, Oct. 16, where they showed pictures of the police officers posing in front of the delivery van with a crate of donuts by their feet.

“There were dozens of delicious donuts on board the stolen van that the store manager gave to the police officers,” the official page reported.

A Krispy Kreme Doughnuts delivery van was stolen this morning from Lake City, Fla. It was recovered this afternoon at…

In the picture, the police officers can be seen helping themselves to some of the treats, which were given to them by the branch’s store manager.

The police department, however, thought it apt to share the donuts with the homeless people around the area.

In another photo, a line of homeless people can be seen waiting for their turn as one police officer distributed the doughy goods from the back of a police car.

“The officers saved a few donuts to enjoy later and donated the rest to the homeless feeding that takes place adjacent to the police station each night,” the police department stated. JB