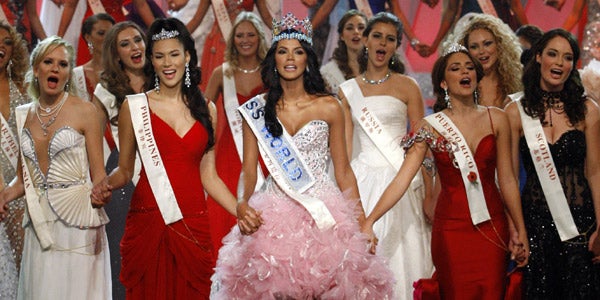 Miss Venezuela Ivian Sarcos , center, sings on stage with her fellow contestants after she is announced winner at the Miss World competition held at Earls Court in London, Sunday, Nov. 6, 2011. (AP Photo/Kirsty Wigglesworth)

The Miss Venezuela beauty pageant goes ahead Thursday, Dec. 13 seeking to brush off a tumultuous sex scandal and present a humbler tone attuned to a nation with a crippled economy.

With the organizers seeking to cut costs, the 65th edition of the pageant is being moved from its historic home at the Caracas Polyhedron Arena — capable of holding an audience of 20,000 — to a cozy 200-seat television studio.

“It’s not a moment to have an opulent Miss Venezuela, because what the country is going through doesn’t justify it. But we don’t want to give up,” event manager Nina Sicilia told AFP.

“We are adapting to the resources we have,” said Sicilia.

The economic crisis means much of the glamor has had to go and some of the Misses have been turning up to rehearsals by bus or metro, Sicilia says, reflecting this year’s leaner feel.

“These 24 young people are suffering the same problems as the rest of society,” said Sicilia, runner-up in the 1985 contest.

The contest is still hugely popular with Venezuelans. They will watch the TV extravaganza in their millions, despite slogging through the fifth consecutive year of a severe economic crisis that has seen shortages of basic foods and medicines and forced 2.3 million to emigrate.

Make-up and hair-styling deals have been sealed with sponsors in return for TV advertising and costume costs are being shared with designers.

Music and choreography are being performed by young Venezuelan talents, some of them appearing on television for the first time.

Gone are the days when Latin American or Spanish stars like Celia Cruz, Raphael, Camilo Sexto and Raul di Blasio were fixtures at gala performances.

As a metaphor for the pageant itself, contestant Juliette Lemoine — representing the state of Vargas, near Caracas — took a tumble during the dress rehearsal on Tuesday. Much like the show itself, a tearful Lemoine bravely got up and carried on with her routine.

The trimmed down contest will aim to erase any trace of a sex scandal that dogged it just months ago.

The organizers were forced to shut down temporarily amid accusations that officials had procured young women as sexual companions for wealthy sponsors, including businessmen and officials in the government of President Nicolas Maduro.

Osmel Sousa, director of the Miss Venezuela Organization for nearly 40 years and nicknamed the “beauty czar,” stepped down. He has denied any wrongdoing.

A new code of ethics prohibits women from receiving external funding or being nominated by third parties. They have to apply to represent their state in the contest by completing an online form.

The event has been “depersonalized,” said Sicilia. “There cannot be anyone above the organization.”

Sicilia defended beauty contests in the face of #MeToo era criticism that they violate the dignity of women: “A woman has to understand that with her voice, only with her voice, she is capable of changing the world.”

The winner of the contest will represent the Latin American country at the Miss World pageant, where Venezuelans have an envious record, sharing with India the record for the most victories, six. KM