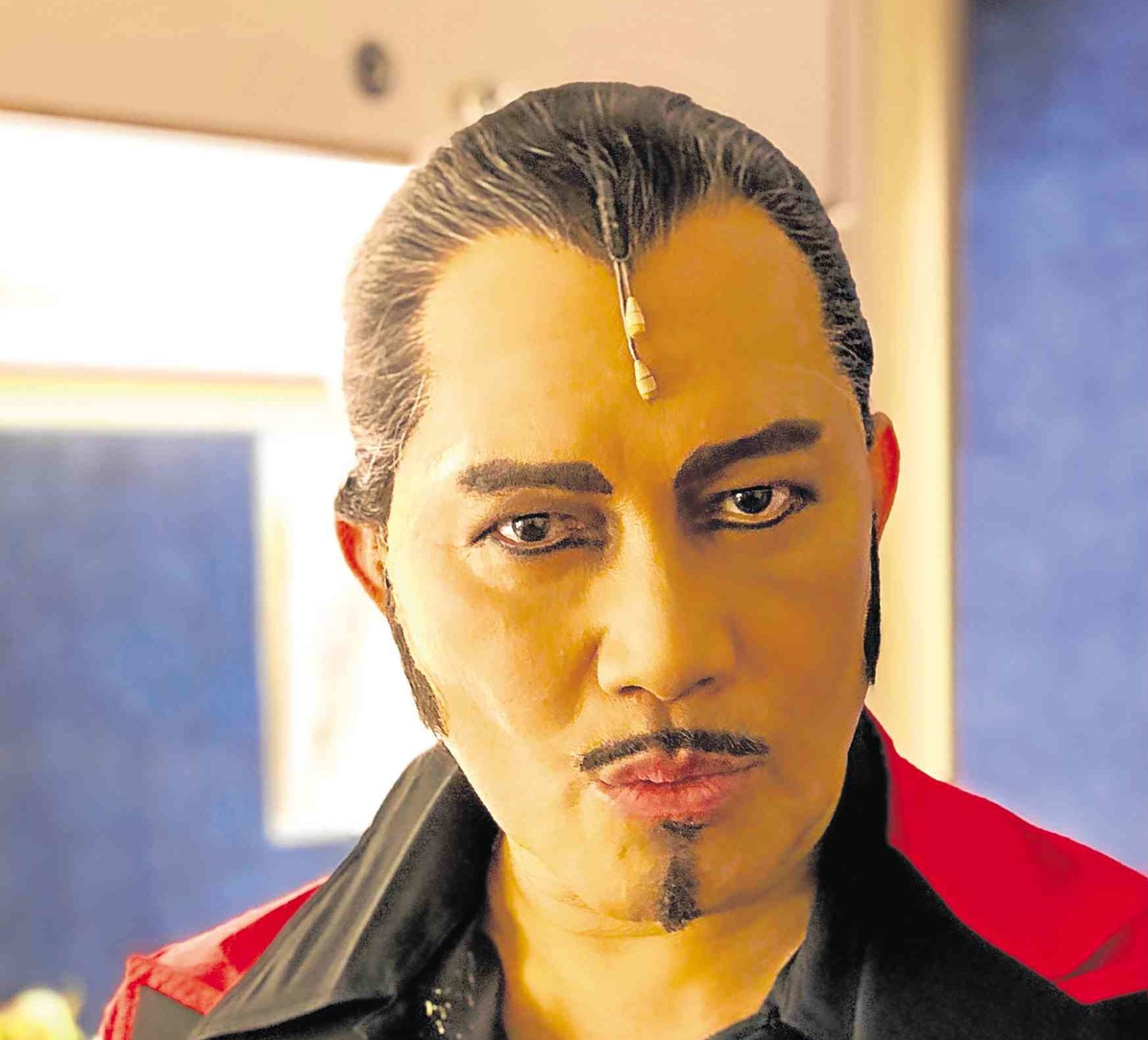 Leo as The Engineer

With grateful heart, Leo Valdez does The Engineer—his 3,000th-plus performance

I try to imagine London now,  its chilly winter that somehow is saved from dreariness by the dazzling lights of Christmas on Oxford Street—those angels as tantalizing webs of light swooping down on you from the sky as you walk the street—and then the happy lights of Carnaby. That was my London last Christmas, simply unforgettable.

It was a London of imagery, not of words.

Now I try to imagine a wintry London, but this time, with my friend, Leo T. Valdez, right smack in the middle of the scene (shopping, most likely), because this theater icon, who became known worldwide for his Engineer, is back in Europe doing The Engineer in “Miss Saigon.”

He has just finished the first leg of the UK-European tour of “Miss Saigon” and, a few weeks ago, was taking a break in London, the city where he lived in the ’90s, and where it all started for him. I can imagine him bundled up but chic—in leather, cashmere, furry coat. Leo, I love to tell him, is a clothes horse; I can’t forget his eye-grabbing look in Alexander McQueen and those stratospheric platforms.

In London this winter, he must have felt like it was 1994 all over again, at the Theatre Royal Drury Lane in the West End, and he was thick into “Miss Saigon,” winning over audiences night after night. London today must still have that time-tunnel effect on him, and lucky me, I catch Leo’s “Miss Saigon” vibe, even if only in Messenger and email.

Leo is doing “Miss Saigon,” in UK, Germany and Switzerland. Sir Cameron MacKintosh, producer of “Miss Saigon” (“Phantom of the Opera,” “Les Miserables,” “Cats,” “Hamilton”), invited him to do The Engineer again after 10 years, his last stint being the 2007-2008 Australian tour.

“It is quite an honor and a privilege to be The Engineer who has done the most shows than the other Engineers,” writes Leo in an email to us.

Leo has done more than 3,000 shows as The Engineer—a feat reported in broadsheets, magazines and TV shows abroad.

“At this wonderful stage of my life’s journey, when I believe I’ve seen everything, my life’s experiences greatly help in my new approach to the role,” he now says.

A runner, Leo is so fit. He sticks to what he calls “healthy-ish” diets and does 10k runs and 15k slow runs on weekends —“They’ve served me well in terms of stamina and faster recovery in big production numbers.

“I take pride in being able to get very trim and fit as soon as I need to, so the costumes look good on me, and so that I can keep up with the energy of this awesome ‘Miss Saigon’ company, who have an average age of 25! How young is that!”

At this stage in his life, he’s giving the role a different flavor, if not the best flavor.

“My Engineer is different in a good way now. I believe it is better,” he says. “He is way more vicious, ruthless, and yet at the same time, a charmer and the epitome of a Machiavellian character who will go through anything to achieve his American Dream. I believe every scene is now clearer with different flavors The Engineer injects into it. I relish doing every scene. It must be because I want to bring my Engineer to an even higher level.”

And the reviews of Leo’s Engineer have been very heartwarming and encouraging, and the shows have been receiving standing ovations. Leo is touched that MacKintosh made it to the show’s opening in Zurich last week and looked in on him in his backstage room.

“’Miss Saigon’ has done even better than when I was doing it years back,” he says. “The creative team and Cameron Mackintosh never rest on the show’s laurels. They make it more relevant, more current, and now it is grittier, sleazier, much more spectacular, and the love story between Kim and Chris never fails to touch a chord.”

Leo recalls how he was asked to do The Engineer again: “I was holidaying in New York when I got a call from a good friend in Manila, Bobby Garcia of Atlantis Entertainment Group, who is now tasked by London to organize ‘Miss Saigon’ auditions in Manila.

“He said London was looking for me to do the Engineer again and if I was still interested. Then I got an email from London inviting me to join ‘Saigon.’ Afterwards, as standard operating procedure, they requested if I didn’t mind getting together with the New York team in a rehearsal room to sing two of The Engineer’s songs, ‘If You Wanna Die in Bed’ and ‘The American Dream.’ Of course I knew that they really just wanted to make sure if I could still sing it, how my voice sounded, and if I could be The Engineer that they were looking for.

“So I got together with the group headed by Tara Rubin, one of New York’s biggest casting directors, the musical director of the Broadway revival, a pianist repetiteur, and a lady who filmed me for the video to be sent to London. After the session, to hear the word ‘fantastic’ from this wonderful group was very heartwarming. Four days later, I got the invitation…I never gave it a second thought.”

Leo’s is a story of one whose fierce talent is matched with even fiercer discipline. Not only has he kept his running regimen, he’s also eaten healthy. “I don’t eat red meat, although the steaks here are too good. As I don’t know how to cook, I make do with loads of veggies and fruits, Scottish salmon, and skinless dressed chicken breasts and thighs that are my staple. Lightly salted, with loads of garlic, simple and healthy.”

Since it’s the dead of winter, he protects his voice from the cold. “As I am sweating during the show, I look funny walking backstage with a shawl covering my head and body as the cold can really affect the voice.”

No matter the season, it’s amazing how Leo has kept the passion burning.

“The feeling of being back on the ‘Miss Saigon’ stage is almost surreal…It’s a great feeling being back doing the role I love most. When I got the invitation, I knew they needed an Engineer who could deliver the goods, especially in the very important European market.

“I believe this is the right time I could go back to the show that has been so good to me through those many years. We had a month of energy-sapping rehearsals and I’m thankful that with the new version, to which I was still adjusting, everyone has been very patient and supportive—the creative team, the company office, the awesomely talented young cast and of course, London making sure I am well taken care of. And I am so thankful. What an honor and a privilege it is, and I feel it’s payback time and the rest can wait.”

If you follow Leo’s Instagram posts, you’ll note how he sees life as a fun journey—his hashtag is #hakunamatata.

Leo’s grateful heart—that’s exactly what we need to put us in the mood for Christmas.