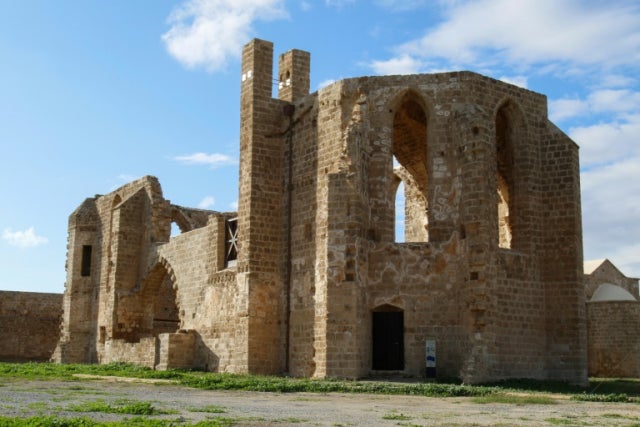 The Carmelite Church, dating back to 14th century and restored by the Technical Committee on Cultural Heritage in the old city of Famagusta, Cyprus. Image: AFP/Christina Assi

Residents from both sides of Cyprus are coming together to restore their ancient heritage and mend ties away from politics even as peace talks remain stalled.

Over the past decade Greek and Turkish Cypriots have joined forces to rebuild and restore dozens of churches, mosques and historical monuments on the Mediterranean island, after they were damaged by conflict or neglect.

“We are cooperating, we are working together and we are bringing new hope to the people living on this island for a better future,” said Turkish Cypriot Ali Tuncay, who sits on a bi-communal body that oversees the work.

“Some of our friends are saying that we are a mini-model for the future of Cyprus,” added the member of the Technical Committee on Cultural Heritage.

John Karis, the Greek Cypriot secretary of the committee, agreed.

He said the project was “vital” because it brings people together.

Alongside “restoring the buildings, we also restore our history”, he said.

Cyprus has been divided since 1974 when Turkish troops invaded and occupied the northern third of the island in response to an Athens-engineered military coup, after a decade of inter-communal tension and violence between the Greek majority and the Turkish minority.

The last talks to reunify the island collapsed last year.

A 12-member team oversees the conservation project that was launched in 2008, sponsored by the United Nations Development Programme (UNDP).

“This is a tangible example of the important role cultural heritage can play in reinforcing a shared identity and contributing to peace and confidence building,” said Tiziana Zennaro, who heads the UNDP’s Cyprus office.

Zennaro spoke this week during a presentation on ruins that have been restored on both sides of a UN-patrolled buffer zone which slices through Cyprus, and conservation work that is still underway.

The city of Famagusta — which boasts an ancient walled city and breathtaking medieval ruins, abutting the buffer zone in north Cyprus — is at the heart of the joint restoration initiative.

Landmarks in old Famagusta — including Saint Anne’s Church and Tanners’ mosque — have had a makeover.

Historians believe the church was built in the 4th century as part of a monastic complex, initially for the Catholic order before being given to the Maronite sect in the 14th century.

Tanners’ mosque, named after tanners who worked nearby, lies across the street and was originally a small church, before the Ottomans laid siege to Famagusta.

Tanners reputedly went there to avoid going to larger mosques where they feared the smell that stuck to their skin and clothes would offend other worshippers.

‘Hatred is my only enemy’

Famagusta’s “Land Gate” — the walled city’s main entrance — and the towering Ravelin Bastion that protected it from attack have also been restored.

The bastion was originally built into natural rock by the Lusignans, before being fortified by the Venetians and later modified by the Ottomans. It reopened in June.

A mosque in Deneia, inside the UN-patrolled buffer zone, is also being restored.

Residents say it was originally built using stones from a church that was destroyed in 1571 during an Ottoman military campaign.

Traces of an Islamic mural can be seen on a wall in the one-room house of worship, while on another wall hangs a frame inscribed with the words “Hatred is my only enemy” — the words of the Turkish poet Yunus Emre.

Christakis Panayiotou, who heads Deneia council, is proud of the conservation work and the cooperation that gave rise to it.

“The most important thing… is to be able to show and to tell the world that we Greek Cypriots and Turk Cypriots must live together.”

The EU has so far provided 14.7 million euros ($13 million) for the project, while funds have also come from local associations and NGOs. CC