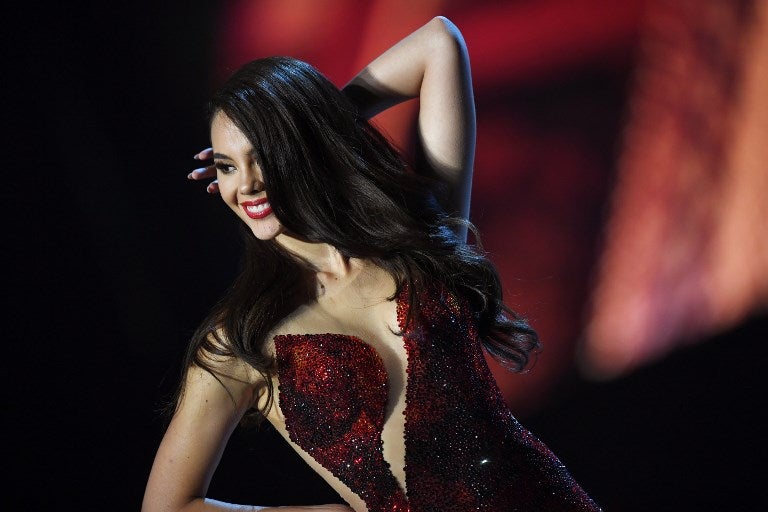 Catriona Gray of the Philippines competes after being selected as top 10 finalist during the 2018 Miss Universe Pageant in Bangkok on December 17, 2018. - Miss Philippines was crowned Miss Universe on December 17 in Bangkok after a trailblazing ceremony praised for featuring its first transgender candidate but marred by gaffes about the English-speaking ability of two Asian contestants. (Photo by Lillian SUWANRUMPHA / AFP)

MANILA, Philippines — A mayoral reception for Miss Universe 2018 Catriona Gray is in the works should the Cairns-born beauty queen visit her birth place.

Mayor Bob Manning of Cairns City was quoted by The Cairns Post on Tuesday saying the city council holds a Mayoral reception for “local people who have achieved world championship status.”

“We would look at holding a similar event for Catriona if we were made aware of an impending visit to Cairns,” the report quoted Manning.

The newly-crowned Miss Universe was born to an Australian father, Ian Gray, and a Filipino mother, Normita Magnayon, in Cairns City, Queensland, Australia.

With the ever beautiful mumma bear 🐻 @mitagray

As the Philippine bet won the Miss Universe crown on Monday, the city official referred to this as “another wonderful Cairns success story.”

He added: “We’re all incredibly proud of Catriona; she’ll always be a Cairns girl at heart and we support her all the way.”

Gray only moved to the Philippines in 2011 after graduating from Trinity Anglican School in Cairns City, which also congratulated the beauty queen through a Facebook post.

Congratulations to former TAS Student Catriona Gray – Catriona graduated from Trinity Anglican School in 2011, where she…

The school noted in the Facebook post that Gray was “a house captain, lead singer in the jazz band and a school chorister” when she was still a student there.

After moving to the Philippines, she pursued a career in modeling and singing. She modeled for various brands and sang covers of songs on Youtube and Soundcloud. /je