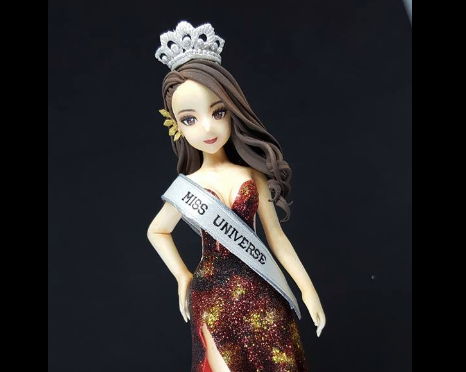 The Miss Universe fever is not fading any time soon, and you could even be expecting merchandise showing the face of Catriona Gray, the Philippines’ bet and this year’s winner.

But somewhere in Ozamiz City, Gray was already immortalized not through a painting, but in a six to seven-inch chibi figurine, complete with a glittering rendition of the Mayon Volcano-inspired lava red gown.

“At last tapos na rin kita (At last I’ve finished you),” 28-year-old professional clayist Dawn Cyle shared on his Facebook account last Wednesday, Dec. 19. With his previous works being mostly figurines of anime characters, he said this was his first time to design a chibi wearing a gown.

His work has gotten attention among netizens, and his post featuring his creation has garnered 3,000 likes and reactions, and around 1,400 shares, as of writing.

Cyle told INQUIRER.net that it took him two to three days to complete her masterpiece; he started to work on the body of the figurine on Sunday, Dec. 16. When asked why he started early, he replied: “[Cause] to me, she is already a winner.”

However, making the figurine was no easy task for Cyle as he had to work with a lot of tools to perfect it. For the eyes, hair, body and dress, he specifically used SuperLight Air Dry Clay. Meanwhile, the crown, earring, sash and shoes were done using metallic air dry clay.

To get that glittering effect on the figurine’s gown, Cyle used glitter dust. And to complete the look, Cyle hand-painted the doll eyes, making the figurine look even more like a show-stopper.

(Because its the first glittering gown figure I made that stands 6 to 7 inches. Also, add the inspiration from Ms. Catriona.)

However, he clarified that he would not be making any more of these as it is not for sale. But he would be open to give it to Gray.

So, if she were given the opportunity to meet the beauty queen, what would he tell her? “Thank you Ms Catriona Gray for representing [the] Philippines in every corner of the world,” Cyle said. “Wala po [talagang] words na mapaglagyan dahil sa pag ka-amaze ko sa kanya and the whole team behind her success. (I am lost for words because I am really amazed at her and the whole team behind her success.)” JB