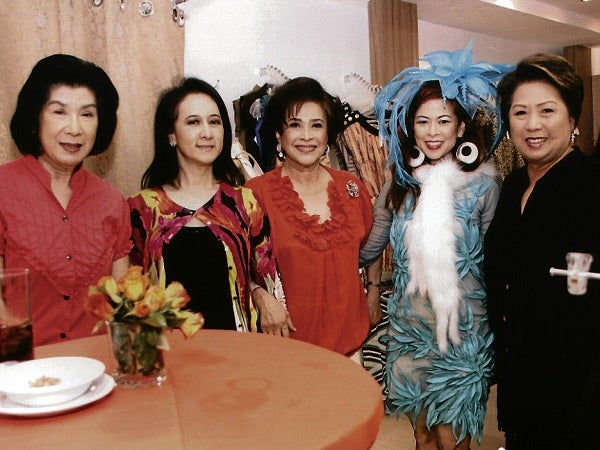 Kung Hei Fat Choi! Goodbye, Rabbit; hello, fire-breathing Dragon. I say goodbye to my animal sign for the next 12 years, which makes me realize that that’s when I turn 60 and my youngest Athena becomes a debutante. A scary thought!

With promises of good fortune and hope for a prosperous future, the Dragon is said to be the luckiest of the animal signs. So, I started my Chinese New Year celebrations by having an Enter the Dragon party a week early, the better to get a jumpstart on luck.

World of Feng Shui Philippines grand dame Marites Allen brought in her expertise and lucky charms to enhance each sign and point us to our auspicious directions for the year. At her very successful 8th Philippine Feng Shui Convention Year of the Water Dragon Forecast at the Shangri-La Cineplex, she cited the Rooster, followed by the Horse, Ox and Tiger as the favored signs.

Together with top host Boy Abunda, the feng shui guests were entertained and delighted to check out their fortune for the New Year. Check www.wofs.com for details.

Both Marites and Boy will be reunited tonight at the Manila Hotel for the Grand Chinese New Year celebration, featuring some of the best authentic Chinese food in the country and hotel-wide activities for the special occasion.

The countdown at Manila Hotel will begin at 9:30 in the evening with the dotting of the Dragon’s Eye. Marites will lead the incense lighting, blessings and rituals to usher in the Year of the Water Dragon. As the clock strikes 12, she will give out her Predictions and Forecasts for 2012 as she shares her expertise in geomancy and feng shui.

Sun Bing, Manila Hotel executive chef, promises to prepare an exceptional first meal of the year with dishes that symbolize luck, longevity and wealth for 2012. Funny how Chinese food and delicacies also have meaning to them and are not just for sustenance.

For example, tikoy symbolizes togetherness of the family, and its usual circular shape represents the never-ending flow of luck.

For luck and prosperity, I made sure everyone had tikoy, chocolate gold coins and ang pao. Additionally, we had prizes from Bench, CarbTrim, Zenzest, Watsons, Goodies Brushes, Swatch and National Bookstore. World of Feng Shui displayed all the cures and charms per sign.

To get the lucky party going, Marites gave away gold ingots and coins for each guest so wealth would continuously pour in this year. She advised the ones born on the Year of the Dog and Boar to carry a blue rhino key chain for protection against robbery and theft brought by the violent burglary star.

We all then proceeded to the front of the house to welcome the Philippine Xiong Hong Dragon-Lion Dancers. Their noisy drums symbolized the beginning of good fortune. The dragon dancers performed an amazing number and continued dancing until they reached the pool area, where they did a final dragon dance in front of a two-layer cake especially designed by Penk Ching. Together with the main cake were two other cakes for birthday boy Tim Yap and birthday girl Annika Valdes.

Tonight, of course, is the main event itself. I will host the Mandarin Oriental Manila’s Chinese New Year festivities, the eve of the Year of the Water Dragon alongside Master Joseph Chau Kam Shing.

Mandarin starts off with a very colorful and festive outdoor ceremony, dotting the eyes of lions and a dragon; then proceeds to a Paai-Shan ceremony, an energizing ritual that completes the hotel’s lunar extravaganza.

Hong Kong-based Master Joseph has been practicing feng shui for over 30 years and has been all over the world. He told me that the finale of the evening would be a fireworks display followed by a midnight lauriat dinner.

He also gave me a forecast for the year, noting it will be a “year of change,” which gives everyone, nations included, the opportunity to progress. Citing tourism as one of the auspicious industries in 2012, he believes the Philippines can bloom as a prime destination in Asia, especially with the decline of visitors in Japan and Thailand.

While they are in town, these tourists should patronize our local shops like Ohrelle. The famed shoe brand recently celebrated its silver anniversary at SM City, marked by a festive celebration and blessing. Sponsors for the ribbon-cutting were QC Vice Mayor Joy Belmonte, consul Mellie Ablaza, architect Rene Bacani and me.

Linda Salonga-Pastoral founded Ohrelle 40 years ago. Over the decades, the brand has established itself as a leader in ladies’ footwear. I was impressed to know that Ohrelle is one of the pioneers of the Marikina shoe industry and a long-time partner of SM.

The coming influx of tourists is also sure to spike the demand for connectivity. To serve them, as well as the millions of PLDT landline and myDSL subscribers, the giant telco has created the PLDT WiFi Zone, enabling reliable and high-speed Internet access in public spots all over the metro.

Gary Dujali, PLDT vice president for data acquisitions, told me that the Wifi Zone is “like an extension of our subscribers’ home connections” so they can experience premium WiFi even outside their homes. There are over 2,000 hot zones all over Manila, including select merchants like Max’s, Figaro, Yellow Cab Pizza, Army Navy and Burger King, commercial areas like Eastwood Mall and Araneta Center, and popular nightspots like Republiq and Opus. Check www.pldtwifizone.com for details.

A happy Chinese New Year to all!