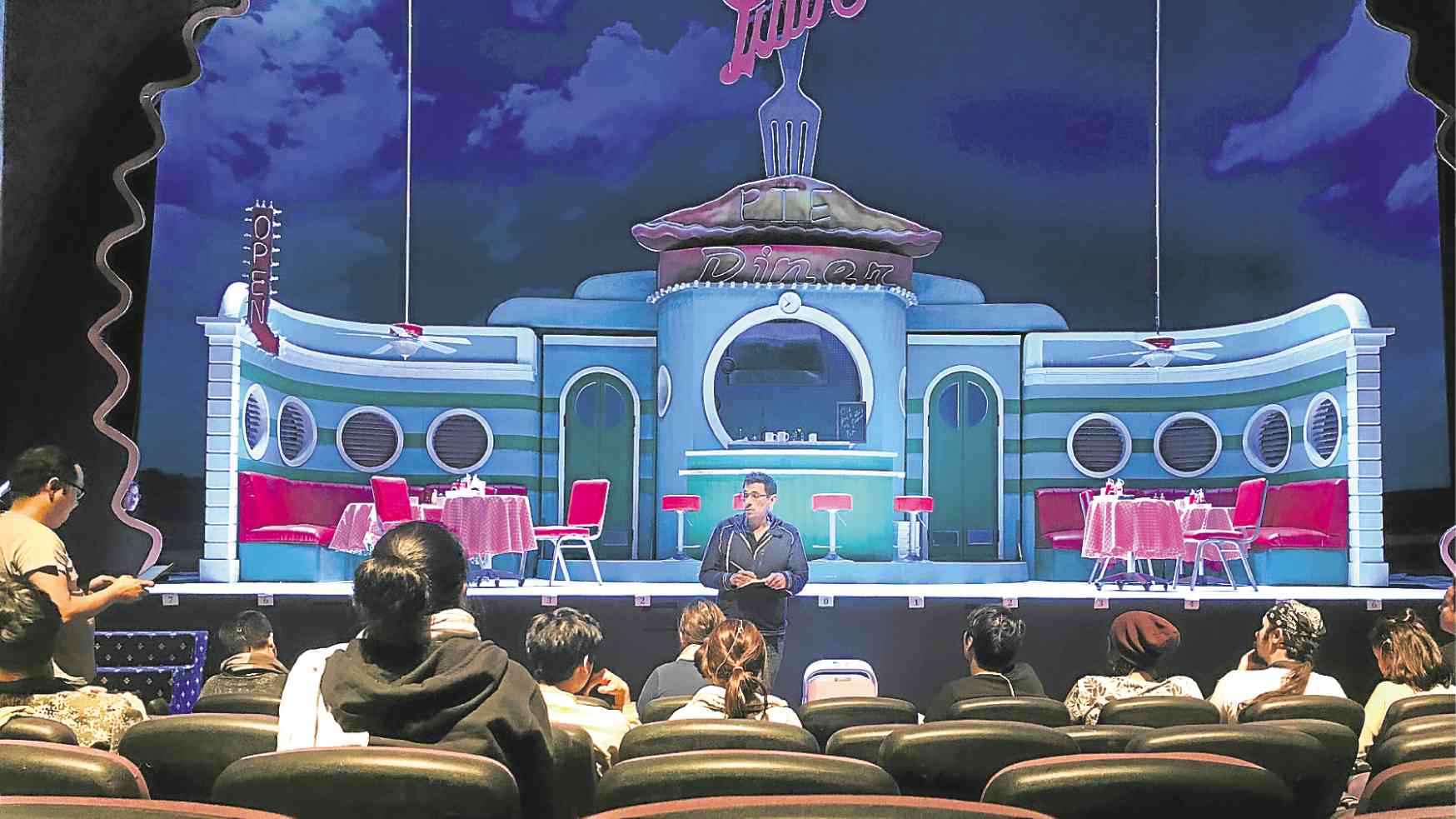 Bobby Garcia before the stage of the just concluded “Waitress.” In 2019, he returns to what he considers the finest written play of his generation, “Angels in America: Millennium Approaches.”

Bobby Garcia and a sold-out 20 years: ‘Atlantis’ success is the voice of theatergoers’

The morning before “Waitress” ran the first of its last five performances, Bobby Garcia posted a Facebook screenshot that showed a sold-out final weekend for the musical. Atlantis Theatrical Entertainment Group had scored another hit.

“The misconception is that we’ve always had an easy time,” Garcia says. “I still remember being able to physically count how many people were in the audience each night for ‘Hedwig and the Angry Inch (in 2001).’”

“Hedwig,” a one-act fictional rock concert starring its titular genderqueer artist, was only the fourth production under the Atlantis brand—then known as Atlantis Theatricals—with whom Garcia has become identified in the relatively small circle of Philippine theater.

“We’ve had our struggles,” he says, “but we’re lucky that if we struggled with one show, somehow the next one always compensated for it.”

It was 1999 when Atlantis, partnering with New Voice Company and Music Museum, had its first hit with its first production: the local premiere of Jonathan Larson’s Pulitzer Prize-winning “Rent.”

“My whole life, I’m abroad a lot,” says Garcia, who earned a Master of Fine Arts in Directing for Theater from the University of British Columbia in Vancouver, after finishing undergraduate studies at Fordham University in New York.

“I put up Atlantis specifically for ‘Rent,’ thinking it would just be a one-shot thing. But there was such a demand for it that I thought, ‘Maybe I should continue doing (theater in the Philippines).’”

“It’s the closest I’ve gotten to doing an original musical. Patrick Bywalski of the Robert Stigwood Organization, who licensed the show to us, gave me full permission to make the show my own. So (musical director) Ceejay Javier and I spent six months rewriting and rescoring the whole thing. Our version was nothing like the original.

“We’re lucky to have built excellent relationships with the licensors and producers in New York and London. Oftentimes, we get to do shows from the current crop on Broadway and the West End.”

That, Garcia emphasizes, doesn’t mean selecting only shows that the Tony or Olivier awards have recognized. “We don’t set out to stage stuff that has won awards. We choose materials that connect to us—and they happen to be award-winning.

“I am personally drawn to stories about inclusion, identity, diversity, examining the complexities of the human heart, and how, and with whom, we build communities and tribes. All our shows deal with similar issues, whether it’s as kiddie as ‘Shrek The Musical’ (2014) or something like ‘Fun Home.’”

And Filipino artists, Garcia believes, tell stories with their hearts right there for everyone to see.

“I wish I had a formula for a hit,” Garcia says. “But I honestly never know whether a show will work or not. We don’t have demographics, research or survey groups here. What we do is tell the story as clearly as possible, so the audience can latch themselves to the characters’ journeys. I’d be the last person to say that ‘Waitress,’ which is so Midwestern America, would be a hit.

“Audiences are smart. And over the years, Pinoy audiences have become quite sophisticated with their tastes and with how they respond to shows. They have become more discriminating, which is good.”

The success of Atlantis, Garcia says, is the voice of the theatergoing public.

“That’s where we’ve completely relied on for our income. We never had government grants or sponsorships from nongovernment organizations. Now, 80 percent of our tickets are (sold) through Ticketworld.”

“I was 25 when I first directed ‘Angels’ (for New Voice Company in 1995), and I was too young to really understand its complexities. I think it made people look at me a certain way, like, ‘Oh my gosh, he’s cutting-edge and pushing boundaries,’ and in no way was that what I was trying to do and still don’t.

“We did both parts in ’95, and I realized you rob yourself of how good the first part can be because you’re just focused on getting through the entire epic, especially during (technical week). Now I want to do it properly. We don’t have the time or money to spend weeks in tech, so I’ll do part one first, then come to part two (titled ‘Perestroika’) the following year.

“(‘Angels’) deals with life and death, heaven and hell, and when you’re 25, you’re so far from death. I’ll be 50 next year and both my parents have passed away. When you’re younger, there’s always someone who’s supposed to go ahead. With those people gone, there’s no more ceiling there. You’re next in line. So you deal with mortality in a very vivid way. That’s the crux of ‘Angels’: What it means to live. What it means to die.” —CONTRIBUTED