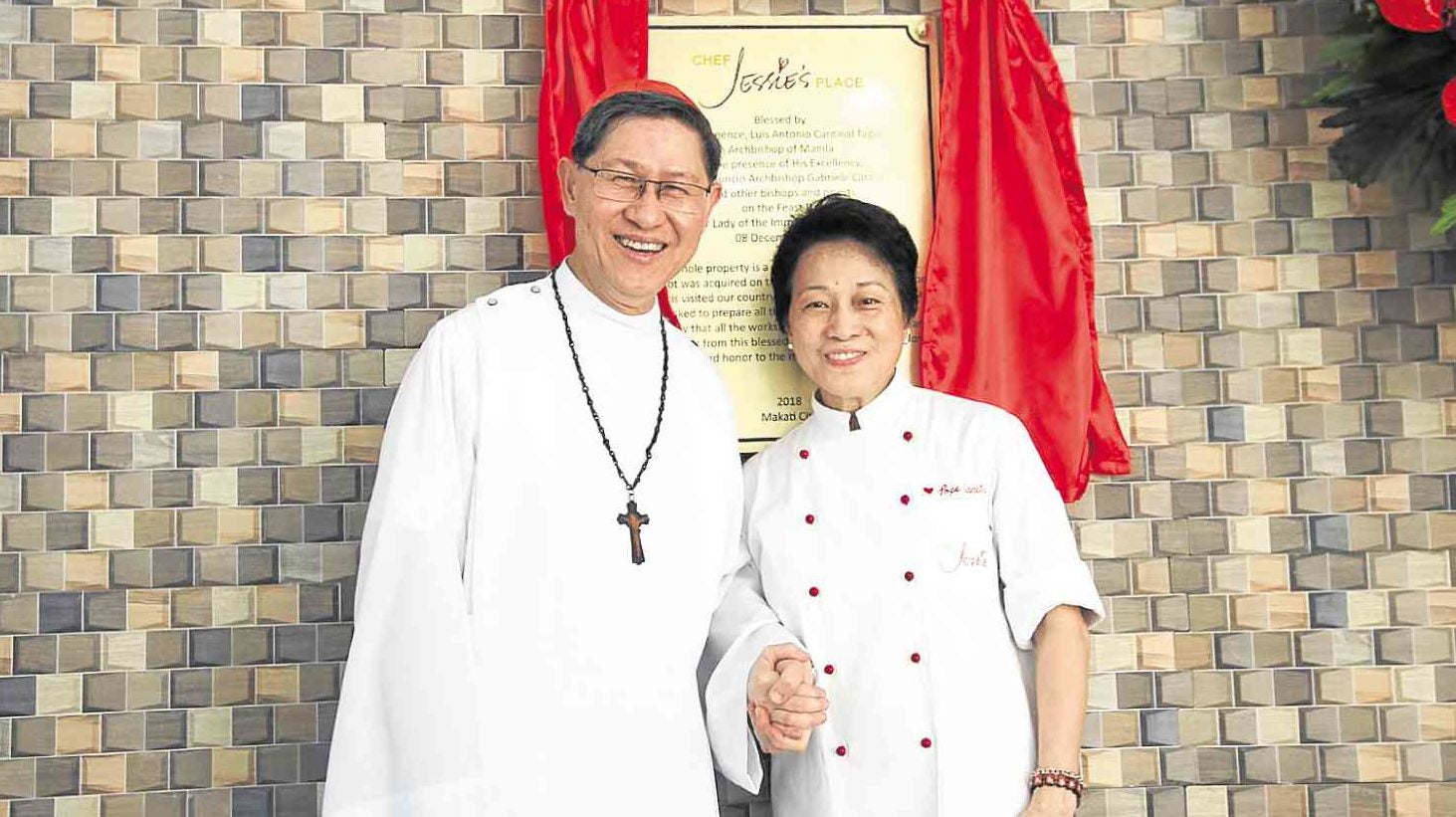 Chef Jessie Sincioco was in tears when she spoke to guests toward the end of the Holy Mass with no less than Manila Archbishop Luis Antonio Cardinal Tagle as main celebrant.

“I couldn’t believe that this was happening in my life,” said Sincioco. “It’s too much.”

She was talking about the inauguration of Chef Jessie’s Place, a five-story building on the corner of Pililia, Obrero and Tanay Streets in Makati, which will house a restaurant and pastry shop under her eponymous label, and function rooms for special dining meetings.

The building will also house her commissary for her famous restaurants (Chef Jessie Rockwell Club in Rockwell Center and Top of the Citi by Chef Jessie at the Citibank Tower in Paseo de Roxas, both also in Makati) and her catering services.

The blessing of Chef Jessie’s Place by Cardinal Tagle coincided with the feast of the Immaculate Conception.

Bro. Kenneth Rey Parsad from the University of Santo Tomas Central Seminary sang the responsorial psalm. Parsad was the same responsorial psalmist, who captured the netizens’ attention with his soothing voice and good looks, for the Holy Mass of Pope Francis at the Manila Cathedral. Sincioco’s nieces, Aiah and Zyrene, read first and second readings, respectively.

In his homily, Cardinal Tagle talked about God’s greatness and how people have been blessed and touched by his grace.

Before the Mass ended, Cardinal Tagle told Sincioco: “I have personally showed your letter of invitation to Pope Francis. And the Pope said, ‘What is this?’ I said it came from you.”

Sincioco simply smiled and was obviously elated by Cardinal Tagle’s recollection of his meeting with Pope Francis.

The five-story white building will soon house Sincioco’s pastry and coffee shop on the first floor. Mezzanine will be a casual dining area. The entire second floor will be the commissary with hot and cold areas. The events hall that can serve 250 guests will be on the third floor. The Holy Trinity Chapel, offices and storeroom will be on the fourth floor. The fifth floor/roof deck can also be converted into an events place.

“I cried because I’ve been praying for this,” said Sincioco. “Initially, I was just praying for a place where I could keep my catering equipment and house my office. But, this is far more than what I was asking for. I was not expecting to have something as big as this.”

Sincioco and Cardinal Tagle’s friendship goes a long way when he was still the bishop of Imus, Cavite.

“He’s like my big brother,” Sincioco said. “I was invited by my neighbor from White Plains in one of his ceremonies in Cavite. From then on, we became so close to each other. I also became close to his nanay and tatay. They treated me like their daughter. If they have special occasion in the family, they would call me and invite me.”

Sincioco admitted consulting the cardinal about her plan of putting up her own building. Every now and then, she’d call him and ask for advice.

“Of course, everything that I do I tell the Cardinal. He blesses it,” she said.

Sincioco designed the Holy Trinity Chapel complete with the images of St. Joseph and Our Lady of Fatima. She tapped Focolare Carpentry to work on the altar and pews.

At the center of the chapel is the Star of Bethlehem on the ceiling. Sincioco wants it to look like the one in Bethlehem, where Jesus Christ was born. A dove will soon be installed to represent the Holy Spirit.

Sincioco says there will soon be a Mass to be held every Friday in her Holy Trinity Chapel.