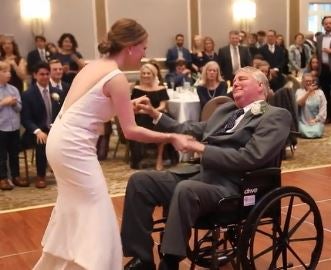 WATCH: Bride dances with terminally-ill father on her wedding day

One bride’s father-daughter dance during her wedding moved and tugged on the heartstrings of thousands of people the world over.

Mary Bourne Roberts, a dance teacher, was determined to dance with her father Jim, an attorney, on her wedding day. Jim is wheelchair-bound and was diagnosed with glioblastoma, a fast-growing and aggressive form of brain cancer, last May 2017, said AL.com. As per the report, Jim and the family were uncertain whether he would make it to Mary’s wedding last Dec. 29.

The dance took place during the reception at The Grand Hotel in Point Clear, Alabama following the morning ceremony at St. Francis at the Point Church. The video of the dance was shared by Blue Room Photography on Jan. 3 and showed Mary doing twirls and pushing her tearful father around on his wheelchair as Lee Ann Womack’s  “I Hope You Dance” played in the background. In the end, Mary sits on her father’s lap and gives him a kiss on the cheek as the guests cheered on.

“Sweetest father-daughter dance ever! The bride, Mary Bourne Roberts (now Mrs. James Butts) is a professional dance teacher,” the page wrote. “Her father, attorney Jim Roberts, has a limited time on this earth. Mary Bourne chose ‘I Hope You Dance’ by Lee Ann Womack for their Father-Daughter Dance and [its’] just great!”

The video has since garnered over 200,000 views and almost 2,000 shares on Facebook, with many netizens touched and reduced to good tears over the scene. As per the report, it was always Mary’s and Jim’s plan to dance to Womack’s “I Hope You Dance” ever since she was a little girl.

“It was such a good thing to happen to him,” Tracy Roberts, Mary’s mother, said in the report. “He would have cried through the whole thing even if he’d been on his feet.”

She added that the dance was Mary’s “testimony to her love for her dad.”

“He was overwhelmed with pride and the love he feels for her. It was a great day for him, a beautiful, perfect day for all of us.” Cody Cepeda/JB