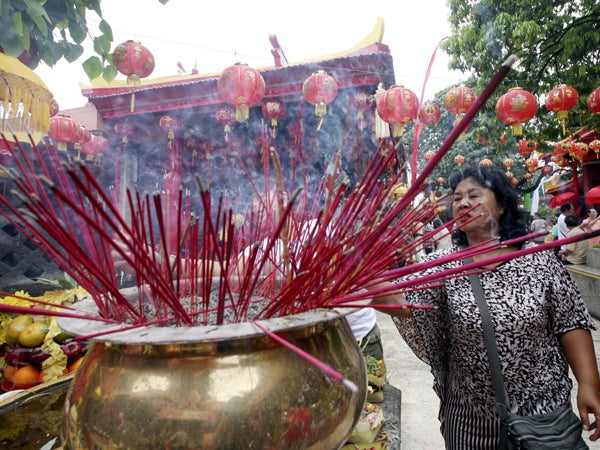 Balinese ethnic Chinese burn incense sticks as they pray at a temple to celebrate the start of the Chinese Lunar New Year, in Kuta, Bali, Indonesia on Monday Jan. 23, 2012. Firdia Lisnawati/AP Photo

Balinese believe that all natural and spiritual elements must exist in harmony.

To maintain harmony between nature and the gods, farmers offer a symbolic portion of their harvest during different ceremonies held in the vast network of subak temples.

Temples range from family shrines in homes, or small temples marking the location where water enters the farmer’s fields, to large, imposing mother temples  at primary water sources dedicated to deities who protect the crop and assure a bountiful harvest.

Another aspect of offering is participating in temple maintenance through either monetary contribution or volunteer service.

The act of offering is believed to be a human manifestation that achieves harmony between the human and spirit realms, as well as in the realm of humans and nature.

Acts of offering take expression in many seemingly diverse but interrelated forms, in the arts and crafts, in agriculture, in harvest offerings and festivals, and in religious rituals and ceremonies.

The sense of order and strict relationship of all elements that mark the harmony and interconnectedness of water, temples, the gods, agriculture, ceremony  and art anchor Balinese philosophy that ties in all actions with the Tri Hita Karana philosophy, the root of all Balinese beliefs.

Eminent anthropologist J. Stephen Lansing, who has spent a lifetime understanding and explaining the complex Balinese subak system and cultural beliefs, says: “Bali is under so much tourism-development pressure that each year over 1,000 hectares of paddies are sold and converted for tourism use.

“Farmers sell their land for immediate financial gain, not realizing that they not only lose their long-range source of agricultural income but also are displaced from their roots. With each paddy sale, the traditional subak system breaks down.”

However, Lansing believes that with proper guidance and support, the subak system as ingrained in  the Balinese consciousness is strong enough to continue for many generations into the future.

There is a devaluation of agriculture in Bali today, says Kirk Johnson, who describes the current situation, “Nobody wants to be a farmer anymore, but when I bring my students to Bali, it has a great influence on their lives.

“Ceremonies are a great part of Balinese society and it allows them to manage the changes that tourism and modernization bring.

“The students see that materialism and the Western approach of gaining money is not the solution for a happy life. When they (the students) come back, they reevaluate their values.”

My Balinese experience, I realized, was one of reevaluation of traditions and beliefs threatened by 21st-century globalization.

After checking into the same high-rise hotel in Sanur on my last afternoon in Bali, I returned to the beachfront strip that I walked in the morning hours on my first day there.

This time the beach was in full swing, crowded with tourists on foot or on bicycles, either lounging on the beach or sitting in outdoor restaurants, soaking up the sun.

There also are sandwich places, pasta places, sushi places, Chinese places, but I wonder about the authenticity of what passes for Indonesian food.

The Sanur beachfront has everything from steak tartare, pastas, sushi, western or Asian noodles, gelato, fresh fruit shakes, although I wonder about the authenticity of the Indonesian or Balinese food.

So relaxed is the holiday atmosphere that conversation becomes more animated at sunset when tourists sit around bars, buy each other beer, talk in a diversity of languages and accents.

Everyone on the beach and at the bars is on a different stage of sunburn and smells of suntan lotion.

I talked first to an Australian, then a Frenchman, Japanese  and Indian. We drank, had dinner, and drank some more. At the end of the evening, newfound friends that we had become, we embraced each other, exchanged e-mail addresses, and said goodbye.