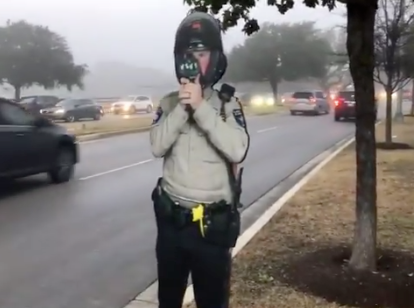 Violators better watch out if they break road laws, as a “sheriff” is on the lookout.

These sheriffs, however, are not real. But standing in the roads of  Texas are sheriff cardboard cutouts, as seen in one Twitter video by Williamson County Sheriff Robert Chody posted Tuesday.

In the video was a cardboard cut of one of Chody’s colleagues, Deputy Wolf, standing on the side of the road. “Watch out for Deputy Wolf or any  other cutouts we may have popping up around the county,” Chody said.

His tweet garnered virality, with 130 retweets and almost 960 likes, as of this writing.

“It’s a creative way to solve a problem without really working the problem,” Chody said in a KTBC-TV interview. “When you’re going 20, 30 miles per hour and you see the silhouette you’re immediately braking, slowing down.”

And while Chody said the plan to use cardboard cutouts is not fully implemented yet, it did pose a reminder for drivers to be mindful of their speed, as the plan first rolled out in school zones.

“We didn’t get one speeder; all these people were braking before they got to the cutout or as they were approaching the cutout,” Chody said. “Slow down because you never know if it’s the real deal or not and the only way you’ll know is if you meet deputy Wolf and not the cutout but the real deputy.”  Katrina Hallare /ra