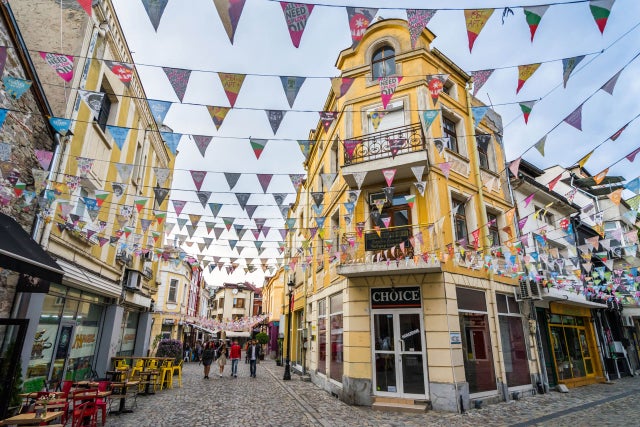 There are lots of examples of Bulgarian Renaissance architecture in Plovdiv old town. Image: IStock/font83 via AFP Relaxnews

Plovdiv: Europe’s other Capital of Culture for 2019

Plovdiv is in Bulgaria. It is the country’s second-largest city after the capital, Sofia, with a population of around 333,000. Dubbed the “City of Seven Hills” (although only six remain today), the destination boasts a rich history shaped by Ottoman, Romanian, Slavic and Greek cultures. Plovdiv was built by the Thracian people, who gave their name to the Upper Thracian Plain.

What to see in Plovdiv?

Visitors to Plovdiv can stroll through cobbled streets and discover ancient ruins. A Roman theater dating from the second century is one of the city’s must-see sights. You could even catch a show or an opera while you’re there. Other relics from the Antiquity include the remains of a stadium, an aqueduct and a Roman forum. For a spot of shopping, head to the low town area, but don’t miss the old town, peppered with examples of typical Balkan architecture, and larger houses in Bulgarian Renaissance style.

What to eat and drink?

First of all, raise a glass, since Plovdiv is the gateway to the surrounding wine-making region. While the geography of the region of Sofia isn’t suited to wine-making, the opposite is true of Plovdiv, where merlot, cabernet sauvignon and chardonnay are grown alongside local grape varieties such as pamid. Around 20 kilometers away, the Todoroff winery — known for its quality wines — organizes tours and tastings for an introduction to Bulgarian wine-making. To accompany the wine, make sure you sample the famous Bulgarian yogurt, notably used in cold cucumber soup. Bulgarian cuisine features all kinds of salads, such as the famous “shopska salata,” sometimes known as “Bulgarian salad.” Vegetables are everywhere in the local cuisine, such as a tasty eggplant dip called “kyopolou.”

How to get there?

The easiest way is to fly to Sofia then take the train to Plovdiv (2½-3 hours). Bus routes are also available.  CC