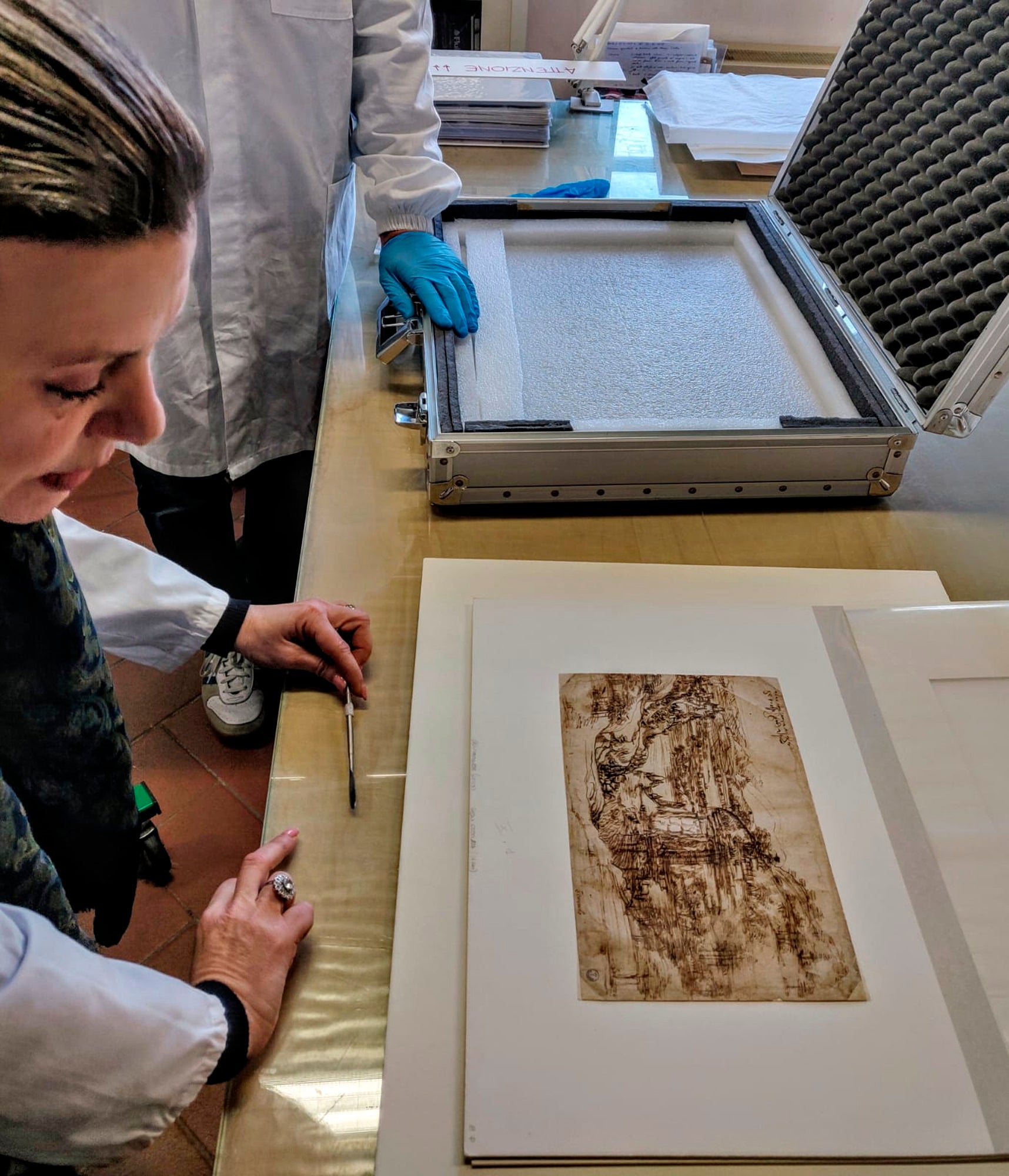 In this photo provided by the Opera Laboratori on Thursday, Jan. 17, 2019, a drawing by Leonardo Da Vinci is observed after being removed from a briefcase which carried it from the Uffizi Gallery to the Opificio delle Pietre Dure where it will undergo scientific analysis, in Florence, Italy. First-ever scientific study of a Leonardo drawing done in his youth shows the artist added details to earlier sketch. The Uffizi Galleries said that 1473 “Landscape Drawing for Santa Maria della Neve” was taken on Thursday to a Florence restoration for scientific analyses. Image: Opera Laboratori via AP

ROME (AP) — The first-ever scientific study of the oldest known drawing by Leonardo da Vinci has found that he added details to an earlier sketch of a countryside landscape, said the Uffizi Galleries, whose collections include the fragile work.

The Galleries said the 1473 “Landscape Drawing for Santa Maria della Neve” was taken on Thursday to a Florence restoration laboratory for study, which began right away with microscopic examination.

Aided by sophisticated, non-invasive instruments, such as infrared light, the experts on Thursday scrutinized the front of the drawing. Later they will study the back, where there is a sketch of a human figure, the prestigious Florence art museum said in a statement.

“It’s possible that Leonardo went back to the drawing in a second moment, maybe right after his studies of geology and rocks,” she said.

The drawing, dated Aug. 5, 1473, in the upper left corner, depicts a bucolic scene, with a castle on a hill in the background and a valley dominating the design’s center.

Leonardo is celebrated as a Renaissance genius who excelled as an artist and who had creative scientific curiosity as well.

Some have hypothesized that the drawing depicted an actual place in Leonardo’s native Tuscany, or as Uffizi director Eike Schmidt said, “was a kind of ‘photograph’ of this or that valley, of these or those mountains.”

But the discovery that Leonardo worked on the drawing in two distinct phases “tilts the scale toward interpretations that underline the imaginative aspect and the character of intellectual speculation by the artist,” Schmidt said in a statement.

The Uffizi only occasionally displays the work, Leonardo’s earliest known drawing, because it is so fragile. But on April 15 it will go on display for five weeks in Vinci, the artist’s hometown, as Italy marks the 500th anniversary of Leonardo’s death.

Then, in 2017, a painted terracotta tile was attributed to Leonardo. Painted when he was 19, it depicts the Archangel Gabriel and is dated 1471. CC