As if courting her all over again, widower visits grave of wife | Inquirer Lifestyle ❮ ❯ 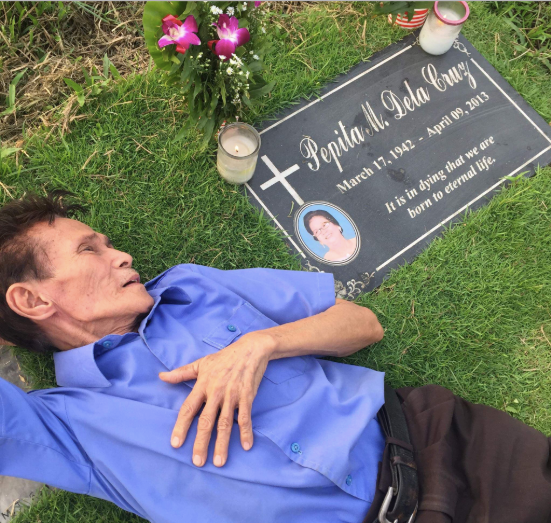 A love that is unconditional knows no boundaries – not even death.

Crisanto “Mang Cris” Dela Cruz, 77, has proven this, and thus touched the hearts of netizens when photos of him posted by her daughter, Mayette Dela Cruz-Cinco, went viral on Facebook last Tuesday, Jan. 29.

In her post, Cinco narrated what happened while she was in the middle of a meeting on the same day, as she noticed that she had missed three phone calls from her dad. She answered the fourth call and heard her dad’s plea, “Marita, mangyari [ay] dinadalaw ako ng lungkot. Tinatawag ako ng nanay mo. Samahan mo naman ako ngayon sa Loyola.” (Marita, I feel sad. Your mom was calling me. Please go with me today in Loyola.)

Knowing how important that call was, Cinco had to cut short her meeting with a client and granted her dad’s request. “For sure, lagot ako (I’m screwed) if I don’t show up today. It’s either he won’t eat, won’t talk to me, or both,” she thought.

When they arrived at the cemetery, they were surprised at the sight of a pile of garbage scattered around the tomb of Pepita “Aling Pitang” Dela Cruz, Mang Cris’ beloved wife, who died of an abdominal aneurysm in April 2013.

Mang Cris was made upset by what they saw. “He was in tears [and] I could only comfort him as I clean around,” Cinco said.

“He came prepared. He has a plastic bag with water to clean the grave, red candles with cover, and an igniter. Nobody dare touch the ‘Aling Pitang visit care bag.’ We bought flowers at the entrance gate,” Cinco recounted.

(We are already here. I have already cleaned it. Don’t worry, I will see to it that you will be visited whenever I feel that you need me.)

(Thank you, Marita. My sadness is gone. I’m sorry if I disturbed you. Did your client get mad? Tell your client, thank you so much. The day will come when I won’t be bothering you anymore, Marita, I will be here, too. Clean [my grave] when you are not busy. Find time to do so.)

In an exclusive interview with INQUIRER.net, Cinco shared how their parents Mang Cris and Aling Pitang met in Divisoria.

“My mother was helping her aunt in selling vegetables in San Juan Market where they lived,” she said. “They owned a store in the market while my father, an orphan since he was 7 years old, lived with his sister in Divisoria where they were also selling wholesale ‘in season’ vegetables.”

“They became ‘suki’ and eventually became friends and lovers before they decided to tie the knot in 1966. Since both of them didn’t make it in college, we were motivated to pursue our education and become professionals,” Cinco recalled.

Mang Cris, as described by her daughter, loves to be surrounded by people. But he is currently staying by himself in San Juan, since he does not want to leave the old house where his memories with his wife remain alive. Mayette and her family make up by visiting him, and cheering him up with the presence of his grandchildren.

He still feels sad whenever he recalls how his wife unexpectedly died five years ago.

“We were all shocked when it happened. There was no preparation, no premonition. Nothing. They were eating lunch together when [mother] fainted inside the comfort room.” she recounted. “He keeps on repeating up until now that they never separated [for] the past 46 years.”

When loneliness strikes, her dad just has to pay his wife a visit to the cemetery. Cinco would take note of how her father appeared energized and excited after every visit as if he just came from courting: “Pag uwi, malakas na. Parang bagong akyat ng ligaw. Sobrang excited.”

“I always tell him that no matter what, we will always be here for him. And that we love him so dearly because he’s the only parent we have now,” Cinco said. “I always tell him not to give up in life and not to lose hope. To live purposefully and don’t get excited about being with our [mother] yet because we still want to enjoy [life] with him.”

At the same time, Cinco longs to inspire others with the love story of her parents and her father’s devotion to the memory of her mother. She also wants to stress how important it is to spend time with one’s family.

“Someday, we’ll be [in] our parents’ shoes. Someday we’ll grow old. [While] we are still strong, let us show our love and care [for] our parents, while we still can,” she said. “While they are still there.” JB