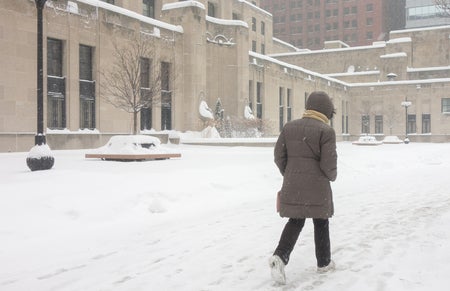 As Chicago and the rest of the Midwestern United States plunged to sub-zero temperatures, many of the region’s homeless have been left out in the cold to set up camp.

Classes, businesses and government offices in Chicago have closed for the time being, even as more than 1,000 flights were canceled at two airports due to the snowstorm. Twelve people across the Midwest have also perished from the extreme cold.

Around 70 homeless people set up makeshift tents in downtown Chicago to make it through the snow, as per the Chicago Tribune on Jan. 31, relying on portable propane tanks to keep themselves warm as the temperature plunged to 21 degrees below zero.

This encampment had to be cleared out, however, after one of the propane tanks exploded on Wednesday, Jan. 30. The response crews who arrived were forced to confiscate the hundred other tanks in the campground due to safety risks.

“When we got there, the fire was extinguished and they found all these propane cylinders. That’s when we escalated it to a level 1 hazmat,’’ Fire Chief Walter Schroeder was quoted as saying.

“There was a significant amount of propane there and with that many cylinders, that’s like a bomb going off,” he added.

The homeless were set to be moved from the encampment to a Salvation Army warming center by city officials. However, in a turn of fate, an anonymous citizen stepped in and offered to put them in a hotel instead for the duration of the week.

“All the folks there,” Jacqueline Rachev, Salvation Army spokeswoman, said in the report. “Some wonderful citizen is going to put all of them up at a hotel for the rest of the week.”

The identity of the Good Samaritan remains unknown, while the hotel of choice was only said to be in Chicago’s South Side.  Cody Cepeda /ra