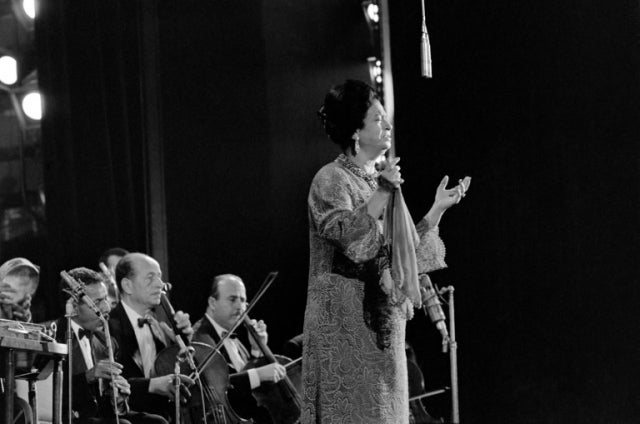 Egypt tunes into nostalgia for golden age of Arab song

Standing before a rapt crowd, Ahmed Adel oozes charm with his passionate performance of an Egyptian classic, evoking a romantic nostalgia for Arabic songs of the past.

After a melodious introduction on the Oud, the famed oriental lute, Adel croons his way through a “Mawal,” a traditional melody boasting long vowels.

“Ya leil” (“O night”), he sings, with the dreamy languor of the original performer, Egyptian legend Mohamed Abdel Wahab.

With cheers of “Allah!” the mesmerized audience shows its appreciation.

“Modern songs are a hit for a day or two, a month, or maybe a year, but then we do not hear about them any more.

“But Abdel Wahab and (Egyptian diva) Umm Kulthum have lasted until today,” said Adel, before his performance in the tiny Mamluk-era hall at the Arab Music Institute.

Egypt, a cultural powerhouse in the Arab world, has long enjoyed a booming music industry.

In the past, the rise of revered singers, such as Umm Kulthum, Abdel Wahab and another Egyptian Abdel Halim Hafiz among others, saw Cairo billed as the Hollywood of Arab song, attracting talent from across the region.

But in the 1990s, Gulf countries vying for cultural dominance emerged as rivals to Egypt’s music industry, and Rotana, the Arab world’s largest record label, was formed in 1987.

The 2011 uprising in Egypt that plunged the country into political and economic chaos also saw a downturn in the domestic music industry.

Yet the Egyptian metropolis remains alive with the sound of music.

Torn between stage fright and joy, Adel performs regularly at the Arab Music Institute paying tribute to his music idols.

During events such as the “Khulthumiat” (the music of Umm Kulthum) or “Wahabiyat” (the music of Abdel Wahab), organized by the 100-year old institute, Adel is often the lead singer with an entire troupe from the Cairo Opera House accompanying his powerful vocals.

And to soar above Cairo’s 24-hour cacophony, she doesn’t just look to golden oldies.

“I bring (pop stars like) Angham, Saber El-Robai, Wael Jassar. They are beautiful voices that have an audience among the youth,” said Morsi.

Sawt al-Qahira, or Sono Cairo, a historic record company, is betting on the internet despite financial setbacks and ongoing legal battles over the copyright to Umm Kulthum songs.

Known as the “Star of the Orient,” Umm Kulthum’s voice is still considered the Arab world’s finest, more than four decades after her death.

And with its wide variety of classics, the record label has struck deals with YouTube and other mobile application companies to keep this heritage alive.

Younger generations have also shown a renewed interest in the classics thanks to popular televised talent shows.

“Arab Idol, The Voice and others show people singing old songs,” said Doaa Mamdouh, the company’s internet services head, adding this has prompted many fans to dig out the original versions.

Rising artists from such places as Lebanon, Morocco and the United Arab Emirates harness millions of views on YouTube, usually singing in their own dialects.

And there is a new genre known as alternative, or “underground,” which has emerged in recent years.

The band Massar Egbari, which roughly translates as Compulsory Detour, rose to fame with a relaxed style of rock and a distinctive performance of classics, such as by Sayed Darwish often called “the father of modern Arab music.”

Although the rock stars say they are influenced by classics, they don’t want to live in the past.

“Nowadays you can record something at home at a low cost,” said bassist Ahmed Hafiz. “After every era, something new appears, these are phases.”

The band, whose style its guitarist and vocalist Hani el-Dakkak describes as a blend of Sayed Darwish and rock band Pink Floyd, is also trying to distinguish itself through its message.

“We try in our lyrics to talk about social problems or things that nobody else will speak about,” said el-Dakkak. CC

In Egypt, a marionette maker strings together memories