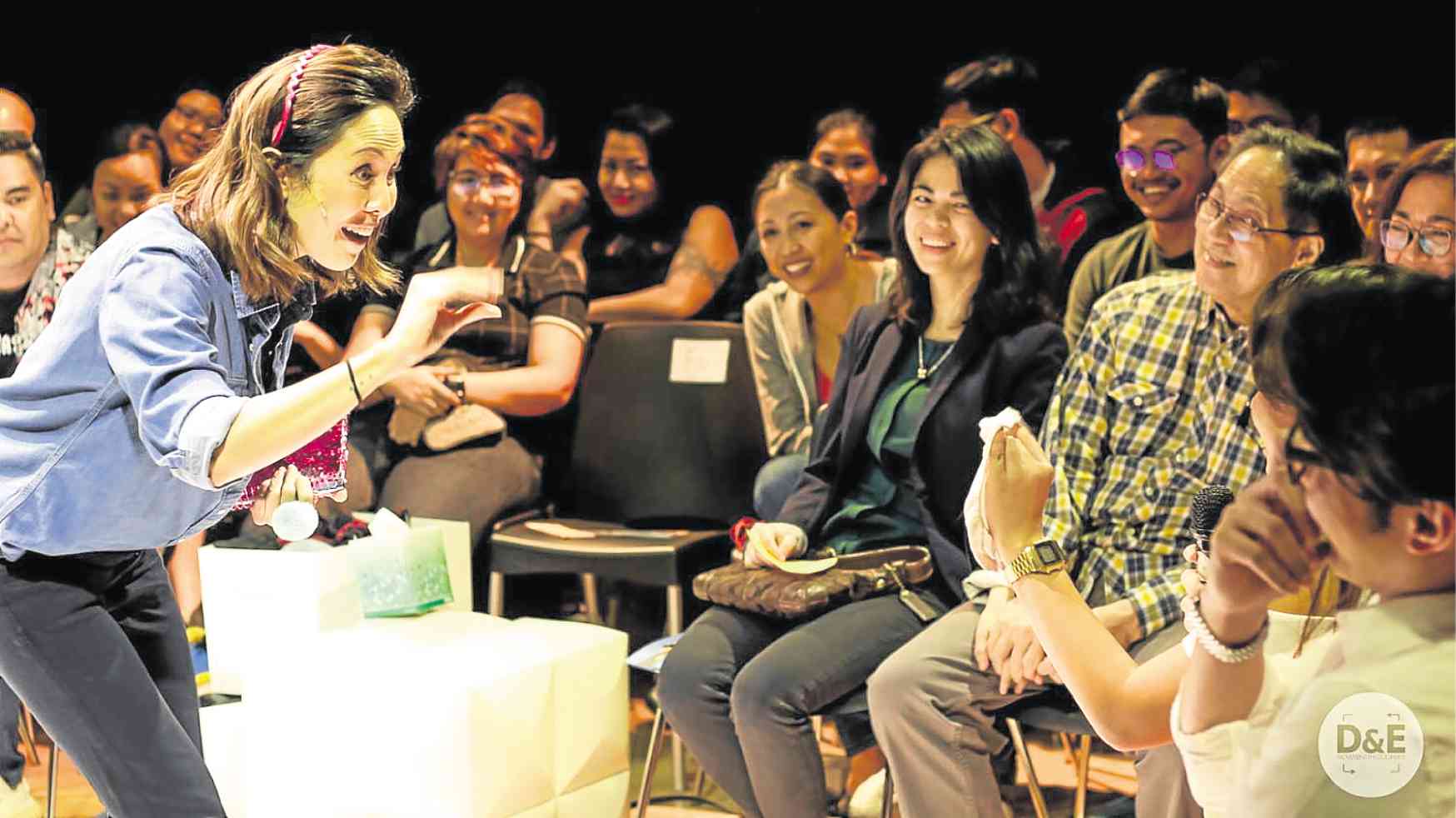 How the manic-depressive becomes truly brilliant

One: ice cream. Two: water fights. Three: staying up past your bedtime and being allowed to watch TV.

So goes the list of brilliant things at the heart of Duncan Macmillan and Jonny Donahoe’s one-person play, “Every Brilliant Thing,” now being given two vastly different lives by The Sandbox Collective under Jenny Jamora’s sprightly, frequently playful direction.

In this 90-minute monologue, a girl journeys from childhood to early adulthood accompanied by the specter of her mother’s mental illness and repeated suicide attempts. Bereft of more sophisticated coping mechanisms as a child, the protagonist crafts a litany of the things she deems wonderful in her universe, a sort of shield against, and antidote to, heartaches and hardships she can barely fathom.

Tricks up their sleeves

But the playwrights have tricks up their sleeves. The conceit of this play is that it is a journey the audience, too, must embark on. Many scenes involve volunteer viewers assuming some role or other opposite the narrator, who also requires the help of most audience members to shout out the items on that pivotal list she repeatedly invokes throughout the show.

Which is to say, what if the selected participants aren’t—for lack of better words—good and game enough? It’s a rattling thought, but thankfully, both times we caught this show, the volunteers were swell.

As with any monologue, the performer becomes the show, and the show becomes the performance. In Sandbox’s production, two actresses alternate: Teresa Herrera and Kakki Teodoro.

Herrera, whose face has been on every promotional material, provides a capable, charismatic performance. She is grace personified, and in her hands, the show becomes a distanced narrator surveying and making sense of the past alongside the audience.

But the greater performance inarguably belongs to Teodoro. In a word, she’s fearless—exhilaratingly fearless. She leads the audience by the arm, then pushes them deep into the character’s turbulent past. This way, the story becomes so much more alive; one actually endures the narrator’s wellspring of feelings, her happiness and sadness, all her ups and downs.

Teodoro’s show more precisely captures the play’s essence, which is the fleshing out of a manic-depressive personality. She evokes with breathtaking emotional range what the Pulitzer Prize-winning musical “Next to Normal,” whose central character has bipolar disorder, puts into words as “the manic, magic days, and the dark, depressing nights.”

In the interactive segments (especially with those very enthusiastic volunteers during the show we caught), you almost think Teodoro wouldn’t be able to gracefully handle the dips and curves thrown at her. But the way she takes the wheel, sometimes even pushing the play into the realm of meta with her hilarious ad libs, is astonishing and flat-out delightful.

If it isn’t clear enough, that, right there, is a star performance. And it’s an injustice that Teodoro, bafflingly labeled an “alternate,” is set to appear for only one more date—the 2:30 p.m. matinee on Feb. 23.

One more thing, regardless of the actress, this “Every Brilliant Thing” owes much of its success to Arvy Dimaculangan’s sound design. It’s always easier to notice the soundscape when it is bad, but here, it is topnotch. Listen to how he modulates and times the sound effects; how and when he favors quiet over noise and vice versa; even just his actual choice of sound as prop. The story not only advances, but also becomes more immersive, because of Dimaculangan’s work, which is a truly brilliant thing. —CONTRIBUTED