Federalism is a riot in ‘Charot!’ | Inquirer Lifestyle ❮ ❯ 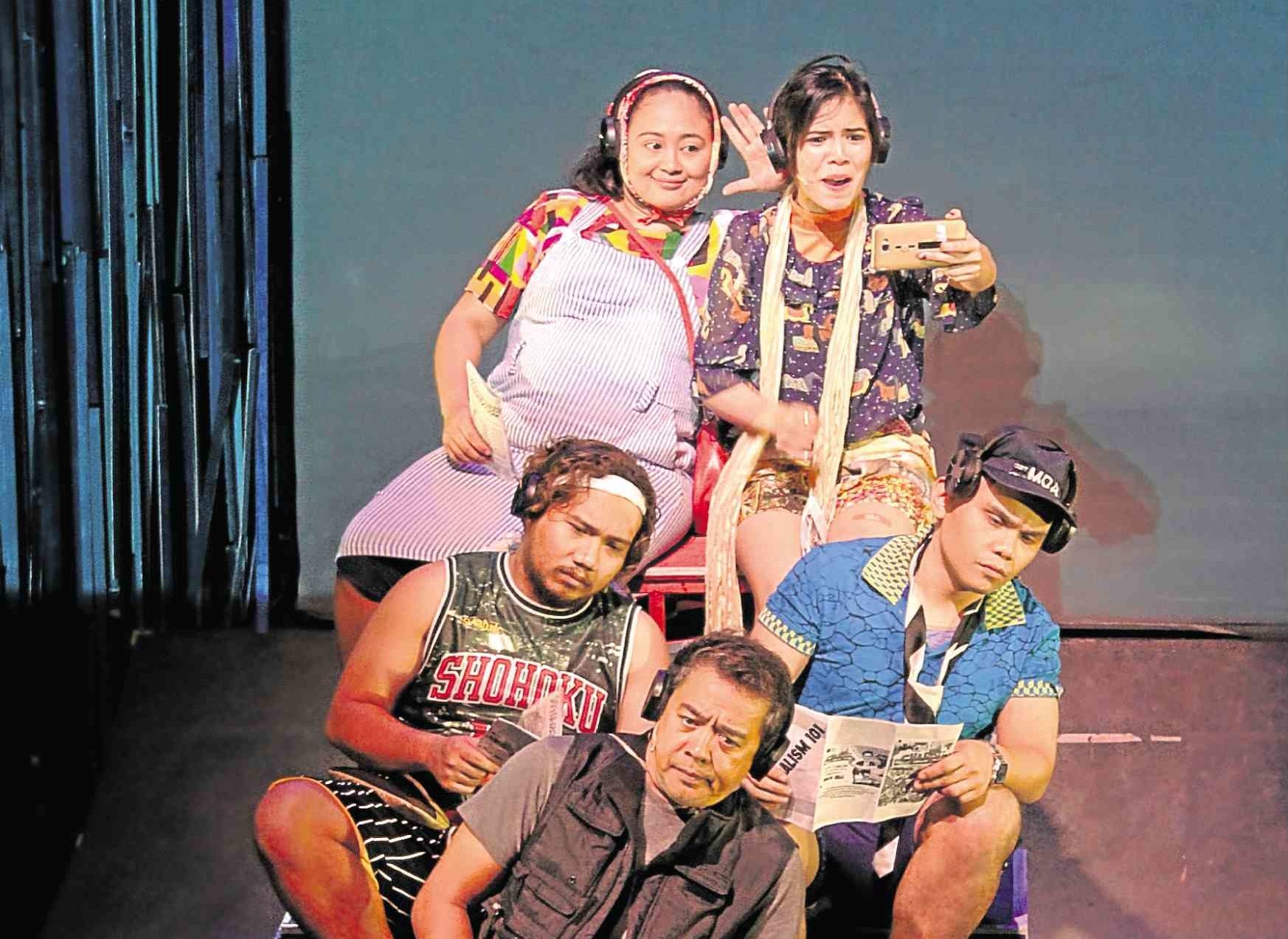 The cast of “Charot!”

Federalism is a riot in ‘Charot!’

The tricky thing about “Charot!”—Philippine Educational Theater Association’s (Peta) 51st season ender—is that it functions more as a primer on federalism than as a proper narrative.

Set in 2020, this story of eight people stuck in traffic on their way to vote for a crucial charter change is messy, shamelessly didactic, but still somehow riotously entertaining. It points its drama toward overtly pedagogical ends, but by totally embracing its nature as a theatrical lecture, only becomes more successful.

At the outset, “Charot!” is impressively stubborn. It begins not by introducing characters and plot, but by simulating a noontime show that is immediately crashed by the fictional band Tagilo. Through song, Tagilo brings up the story’s main concern: the Charter of Togetherness (CharOT), which will see the institution of a federalist government in the “P.I.” should the votes swing toward approval.

But even as “Charot!” gets to its main narrative, it keeps the plebiscite in the background first. Instead, a farcical comedy plays out, with the characters simply attempting to get off the road. And what appears to be a useless first act is actually an essential preamble.

Before getting into the specifics of the charter, “Charot!” establishes what different Filipino voters stand to gain or lose from federalism. As these characters argue over who has the better plan, or who should make the selfless sacrifice, playwrights J-mee Katanyag and Michelle Ngu also characterize the Philippines as the very kind of divided nation that federalism may either repair or exploit. That these voters seem fundamentally incapable of coordination points toward our aversion to discourse with those we’ve judged as Other. That political participation is this messy even before discussing actual legislation is hilarious and tragic.

Katanyag and Ngu display real tenderness toward every character, affirming their dignity and capacity for empathy. Here, people take precedence over politics, which allows “Charot!” to encourage genuine participatory communication instead of haughty intellectualizing.

Also notable is Vince Lim’s music (with additional compositions by Jeff Hernandez), which consistently exhibits that energetic and uplifting blend of genres that has come to distinguish much of contemporary Filipino pop rock.

The second act of “Charot!” is dedicated almost entirely to explaining the benefits and flaws of our government’s proposed shift to federalism. However, thanks in part to the first act’s character work, the debate becomes clear, comprehensive and contextualized mostly within the concerns of the poor, the youth and the working class.

It’s nowhere near perfect, of course. The ensuing discussion definitely isn’t as neutral as it wants to be. There’s a romantic subplot involving a millennial couple that director Maribel Legarda doesn’t handle with as much verve or self-awareness. And the musical’s interactive element—audience members can cast votes several times throughout the show through a website—ultimately isn’t very convincing.

Still, what “Charot!” accomplishes is worth serious consideration. Beyond offering a good time at the theater, it understands the urgent need to demystify politics, to talk about it in an accessible, respectful, but nevertheless intelligent manner. This is the very definition of educational theater—one that can easily be picked up and performed in sectors all over the Philippines. —CONTRIBUTED