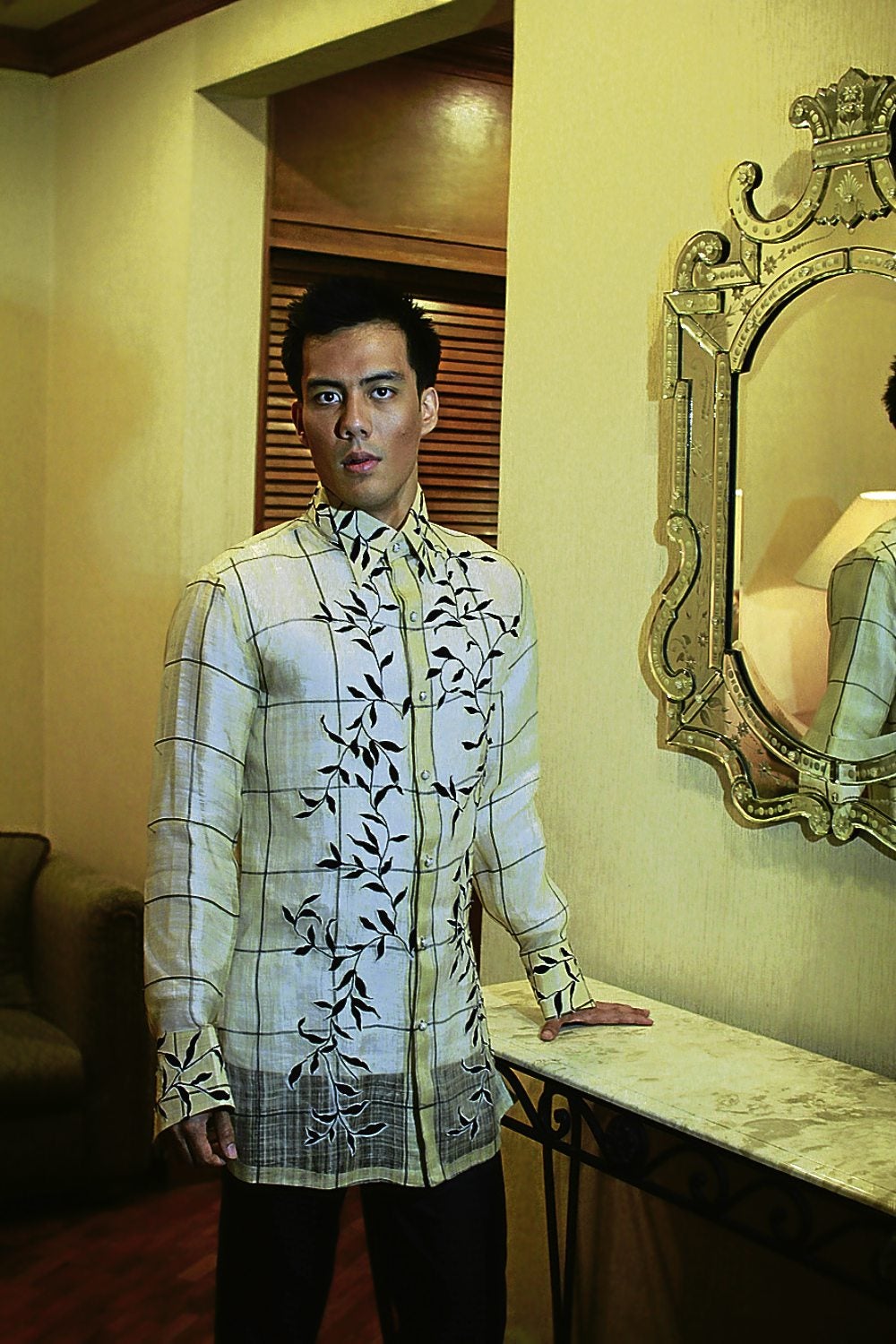 Like most children of show-biz parents, Rafael “Rafa” Siguion-Reyna, who’s dead set on pursuing an acting career, is in an enviable but precarious position.

A third year Communications student at New York University, Rafa, 21, and the youngest of two, took time off from his month-long Christmas vacation in Manila to model designer Barge Ramos’ latest take on the barong (see sidebar).

This wasn’t his first foray into modeling. Although he has yet to do ramp, Rafa has done shoots for friends in the US.

Rafa’s show-biz lineage is well known—multi-awarded film director Carlitos Siguion-Reyna and actress-scriptwriter Bibeth Orteza for parents, the feisty and accomplished Armida Siguion-Reyna for a grandmother, theater artist Cris Villonco for a cousin, and soprano Irma Potenciano for a grandaunt.

“I really enjoy acting,” said Rafa. “Performing gives me a natural high. I still get cold feet. I guess it’s normal, but I just tell myself this is what I want to do. I shouldn’t get scared.”

Not one to take himself too seriously, he can’t even say with conviction that he can act.

“I just know I have fun doing it, but I definitely need more exposure,” he said. “That’s why I like it in the States. I’m more free to do whatever I want because nobody knows me there.”

He first appeared in his dad’s short and feature films, as Maricel Soriano’s kid brother in “Abot Kamay ang Pangarap.” He also did high-school plays, including the musical “Chicago,” at International School.

“I was also into folk dancing in high school. When I moved to the States, I got hooked on hip-hop.”

He said having parents steeped in show biz is an advantage. Apart from the network, he can always seek their advice. He knows that show biz isn’t for the faint of heart.

“But I also like to pave my own path,” he said. “I also want to validate myself and not be known simply as the son of Bibeth and Carlitos. That’s why I’ve been trying to get all the work experience I could get abroad, but I definitely plan to come back.”

In this shoot, for example, Rafa let Bibeth accompany him—on one condition. The usually outspoken and articulate Bibeth had to remain as quiet as possible and reserve her comments for later.

“I’m not allowed to say anything,” Bibeth said when asked about her son’s show-biz ambitions. “I’m not even allowed to visit him in his dorm.”

But one can sense the strong bond between mother and son. While Bibeth was uncharacteristically circumspect and trying to suppress a smile, if unsuccessfully, in their posterity shots together, Rafa did the opposite—he hammed it up.

To be fair, even Carlitos is said to be not welcome at Rafa’s humble New York digs. He shares his space with a roommate and does his own cleaning, cooking and laundry.

He had a Filipina girlfriend, but the two eventually parted ways as “friends.”

“We’re both busy with college work, so we decided that it was better for us to go our separate ways,” he said. “I’m not seeing anybody right now.”

To prepare for his eventual breakout role, he has begun honing his acting skills by attending acting workshops during summer breaks.

One of the first, and by far toughest, workshops he did was in 2010 under seasoned actress-director Gina Alajar, Rafa’s ninang and his parents’ good friend.

“She’s amazing,” he gushed. “Even though she’s my ninang, I never got it easy. She taught us the foundations of good acting and gave us honest feedback after each [acting] scenario. She would tell me if I’m really bad.”

Rafa followed it up the next year with a workshop under actress-teacher Ana Valdez-Lim of Assumption College.

In June he attend another workshop, this time in Manhattan, conducted by a theater company, Neighborhood Playhouse.

If things don’t pan out for this aspiring actor, he has other show biz-related career options. Since his minor at NYU is Entertainment Business, he can work behind the camera as director, producer and, perhaps like his mom, scriptwriter.

“I still have a lot of work to do to improve myself and not just rely on what has been laid before me,” he said.

Shot on location at Herald Suites,

Special thanks to Edna Gepte