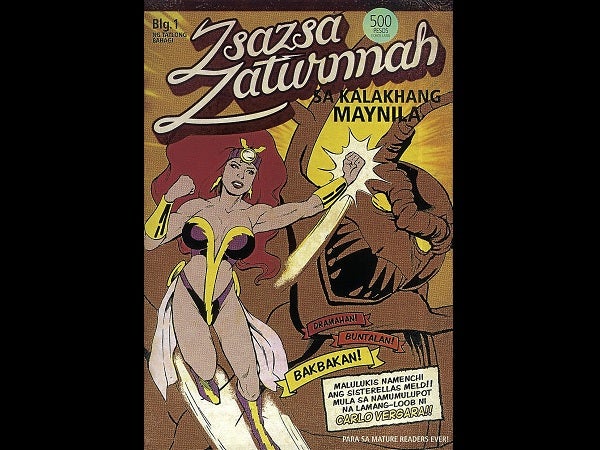 The return of Zsazsa Zaturnnah 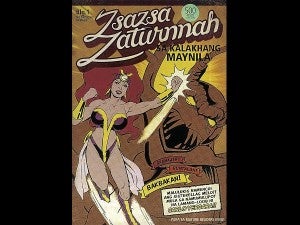 Hold on to your magical stones, Zsazsa Zaturnnah’s back and she’s turning 10. It’s amazing when you think about it, but this year marks a decade since comics creator Carlo Vergara introduced his superstar creation, Zsazsa Zaturnnah in the two-issue series “Ang Kagila-gilalas na Pakikipagsapalaran ni Zsazsa Zaturnnah in 2002, later collected in a trade paperback by Visual Print Enterprises. The series received critical acclaim but, more significantly, tickled the public imagination. In a masterful story that he both wrote and illustrated, Vergara shows how the small town beauty parlor owner Ada found—after it fell from the sky—a rather large magical stone that, when he swallows, transforms Ada into the impossibly statuesque super-heroine Zsazsa Zaturnnah. More than just a fantastic comic book, “Zsazsa Zaturnnah” was a clever and hilarious take on gay culture as well as Filipino komiks traditions, and far more resonant than a mere Darna parody where a gay man actually becomes a powerful woman.

Yet in many ways, Zsazsa Zaturnnah the character is most powerful in her original form, as a comic book character. As good as the stage and screen iterations of “Zsazsa” were, it is on the printed page that Zsazsa truly shines because it is also here that Vergara gets to exploit his considerable creative powers—and so does Zsazsa by extension. Here, in these pages, they can do anything they want.

So the arrival of “Zsazsa Zaturnnah sa Kalakhang Maynila” Part One (Visual Print Enterprises, 2012, Pasay City, 86 pages) is an arrival as welcome as that of a magical stone from the solar system. The new three-issue series continues where the original series left off. After willingly giving up the magical stone, Ada finds himself moving to Metro Manila with his boyfriend Dodong in what amounts to a fresh start. But not everything goes the way Ada expects as his city friend, the cynical gay talent contestant Gwyneth, isn’t exactly crazy about Dodong’s appearance—and an unknown new menace festers just off the page. Despite having given up his superhuman alter ego, Ada discovers that the world still needs Zsazsa Zaturnnah.

“Kalakhang Maynila” displays Vergara’s clean, strong black-and-white lines even better than before, with his detailed characters now jumping off the page with their solidity and yet some of the book’s best moments come when Vergara contrasts the realistic figures with some really funny comic faces. There is an unmistakable energy present even as Vergara fills each frame with as many details as he can. Check out those cramped backgrounds, each loaded with a plethora of catch-me-if-you-can humor. Relocating the story to Manila gives him a new, expansive panorama to play with.

While skewering parts of our popular culture, Vergara tackles the intricacies of a relationship turned serious, giving the issue some really poignant, thoughtful moments, even as he completely changes the direction of the Zsazsa legend by introducing a new, important character. There might not be a giant frog or an army of zombies in this issue, but you’ll get a threat that, to many, is equally as terrifying. (Hint: they’re scarier when they fly—and are giant-sized). It’s all done in pitch-perfect Filipino and gay slang, a nonstop showcase of asides as well as over-the-top exposition—just remember the series is still for mature readers only as it’s sharp and funny but not for kids. It’s more than enough to make readers wait for the next installment, hopefully out later this year.

For those who have yet to discover the Zsazsa magic, this is the perfect point to jump on, and for those already familiar with this wacky and witty comic book masterpiece, it’s a truly happy homecoming. If there’s one thing that the first issue of “Zsazsa Zaturnnah sa Kalakhang Maynila” proves, it’s that Carlo Vergara has never been more adept at the trickiest circus act of balancing all its multifarious elements, as Zsazsa Zaturnnah’s long-anticipated return to comic book form is everything all at once, squarely both parody and adventure, both romp and critique, and certainly both haha and wow.