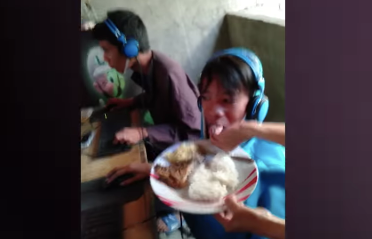 What would you do if you have a child addicted to video games? One mother in Cabanatuan, Nueva Ecija, instead of being irritated by her son’s addiction, has seemingly accepted it, and opts to continue taking care of him, though in a rather strange way.

The mother, Lilybeth Marvel Garcia, recently shared a Facebook video of herself going to the local computer shop, with a plate of food for her son, 14-year-old Carlito.

Since the teen was busy playing his favorite computer game, “Rules of Survival”, Garcia made sure he will not skip his meal — by hand-feeding him.

(You have so many coins, you might not go home until tomorrow. Do you even take a toilet break? Good Lord, my son is pathetic.)

Garcia’s video became viral, with about 44,000 likes-reactions and 2.5 million views before it was removed from her timeline. Her video was later re-uploaded by Viral Press in YouTube.

The 37-year-old massage therapist mom told INQUIRER.net today, Feb. 24, that she and her husband decided to have Carlito, a grade 8 student, drop out of school this year due to his condition.

(He failed all of his subjects on the first grading period of school. I talked to him and he promised that he will do better next grading. By the time of the second grading period, he was not attending his classes anymore.)

At first, Garcia tried to discipline her son by nagging at him and spanking him. Since that did not work, she made him do household chores for a minimal fee.

(I give him 20 pesos everyday to do household chores, to teach him a lesson and to encourage him to go back to school next year.)

But for Garcia, Carlito is not really a game addict because he helps around with the household chores and knows his limitations. “‘Pag wala naman ring siyang pera, nanonood lang siya,” she added. (When he does not have money for playing, he just watches [other gamers].)

She also denied that her son can last up to 48 hours playing, and clarified an earlier statement from the deleted post, “Katuwaan lang po ‘yun.” (It was only a joke.)

The mom explained that she removed the video from her timeline because of the hateful comments she received. She also clarified that when the video was taken, it was the only time she brought food for her son — as a way to make him feel guilty for what she has to do for him.

(People should not rely on everything they see or hear, or on false news, because they do not know what is behind the story of the video. The video I made was simply just for fun.) JB