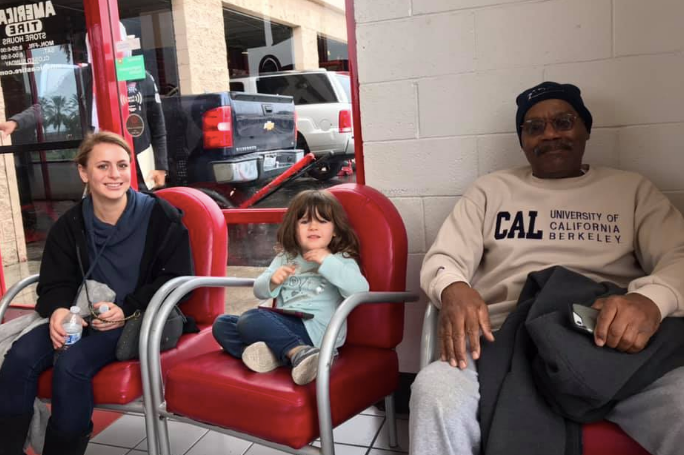 One man from California, United States did not think twice when he offered to help a young mother replace all her tires when she could not afford it.

The kind gesture was captured and shared on social media by a certain Sergio Rodriguez who was at the America’s Tire store in Florida Avenue when the exchange happened.

According to Rodriguez, the young mother, Alex, came into the store with her little girl for a flat tire repair. A 70-year-old man named Phil was also at the store at that time.

“Come to find out the tires on her Silverado were all bald and in need of replacement,” wrote Rodriguez via Facebook on Feb. 5. “The girl was stressed because she couldn’t afford the tires.”

Humanity moment……I’m at the America’s tire Company on Florida. This man 70 years old, named Phil was there for…

Phil, who witnessed the young mother’s dilemma, did not think twice and stepped in to pay for all of her tires.

“Phil, without skipping a beat said ‘I’ll buy all 4 tires for her.’ The entire store was shocked,” Rodriguez said. “Alex said thank you about 100 times. Phil was mister smooth and humble, with a big heart.”

He also said that Phil did not make a fuss and only told the young mom to pay it forward.

“This man blessed this young lady and simply asked that she pay it forward. I absolutely love this,” Rodriguez said. “He dropped almost $1,500. Probably saved this girl’s life and her kids.”

Alex has since shared that she had been afraid to drive lately because her truck has been sliding around for weeks, as per Riverside County News Source on Feb. 7. So, she was left speechless when Phil stepped in and helped her, a complete stranger, out of the goodness of his heart.

“I’ve never seen anything like that happen, doing something that big for a complete stranger,” Alex said in the report. “I was so thankful.” Cody Cepeda/JB