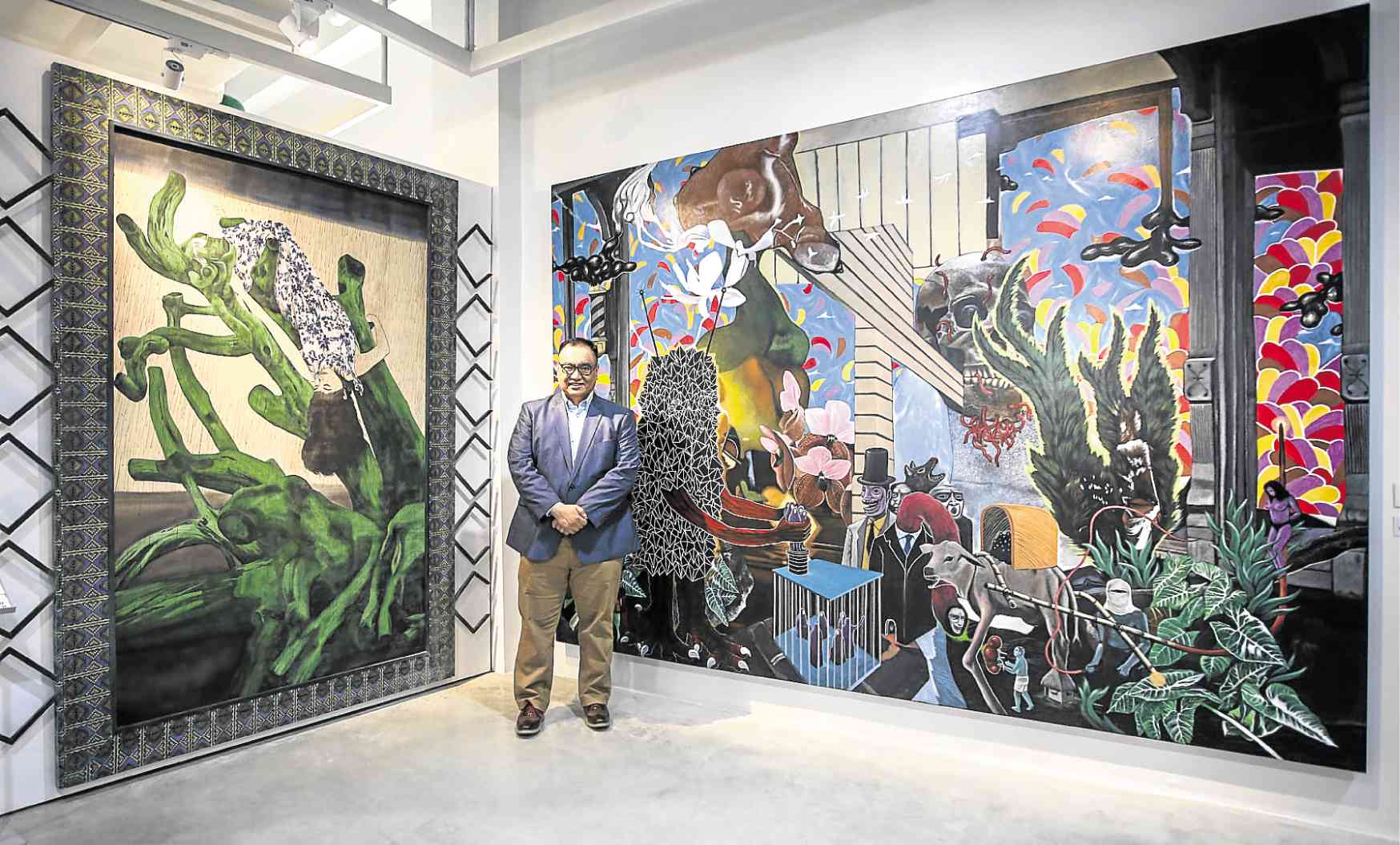 It has been said often that collections allow people to relive their childhood, connect themselves to a time they feel strongly about. It becomes a lifelong quest.

This is a story of an art collector’s dream of sharing his huge collection of contemporary art in a beautiful space, with the community he grew up in.

Ed Valencia’s early Iloilo childhood environment was rich in direct experience and  teaching. He was always surrounded by books and multiple sources of intellectual stimulation.

His mother, a Humanities professor, would often talk about art and its many forms to her children. Among his siblings, he was the one who often engaged his mom in discussions that ranged from observing the architecture of Iloilo’s grand ancestral houses to  reviewing plays by the University of the Philippines  Iloilo Drama Group.

These were significant times for the young Valencia, and in this vibrant educational setting he watched and learned. From his mother did he also first hear about a gifted Ilonggo pottery and ceramic artist, Nelfa Querubin.

Among his mother’s teaching aids was a color wheel, a favorite tool of designers and artists. He spent countless hours toying around with the color wheel, fascinated by the endless combinations he could come up within a spectrum: primary vs   secondary vs  tertiary colors, mixing them all up and enjoying each new outcome at every turn. Each slow and curious turn of the wheel drew him steps closer to a path he would pursue with unbridled passion. Valencia was 9 years old.

Today Valencia is a passionate and prolific art collector. Like other serious art collectors, he has a finance background.

After getting his BA at the University of the Philippines in Iloilo, he pursued his MBA at New York University in 1982. Living in Washington Square Village near Greenwich Village and Soho, he would spend his free time from business school going to museums and exploring Soho/West Broadway where art galleries and artist studios occupied every inch of retail space.

Large lofts in Soho served as real-life canvasses for the artists of the ’80s to create their work. He didn’t acquire anything yet, but he always looked forward with excitement to the summer street art fairs near Washington Square Park. He could hardly wait to get his hands on an artwork he could start a small collection with.

In the meantime, there were pressing matters like school that he had to attend to.

After graduation in 1984, he worked with Arthur Young and Co (now Ernst & Young). After further studies he earned his CPA, and landed in Wall Street with Arthur Young, Morgan Stanley. He was with them for 17 years, and Credit Suisse for another seven years.

It was a stressful career in finance but through perseverance, hard work, ambition and focus, he landed senior positions in the firms. This set the trajectory, his life as an art collector had begun.

New York in the mid-’80s was a simmering cauldron of contemporary art making with an intense resurgent interest in painting.

The young investment banker found himself right in the middle of this universe. Everything he had seen in his mother’s books on art, he was now seeing in living color in the museums all around him.

“I bought what arguably were the first pieces of my first real art collection in the ’80s while I was in New York  and already working. A friend from Iloilo who was also working in New York City was unloading her art collection, which she left behind in Iloilo.

“On one of my trips back home in 1985 or ’86, I saw her collection and bought a small 1982 Ang Kiukok canvas (‘Crucifixion’ series) and a 1981 Olazo  from his ‘Diaphanous’ series. I remember being attracted to the Kiukok because of its color (primarily green) and the fusion of cubism and surrealism in the figure. Olazo’s piece was to me a very lyrical piece! Both pieces remain in my collection and on display on the third floor of Ilomoca (Iloilo Museum of Contemporary Art).

“I always keep an open mind about a lot of things—ideas, views and opinions. That probably carries over to my interest in art. I’m not drawn to particular groups of artists. I primarily look at an artwork for what it is, regardless of the artist. I am drawn by details—not just in the composition or figures or narrative, but even in the techniques and execution of the artwork, or even the novelty of the medium.” 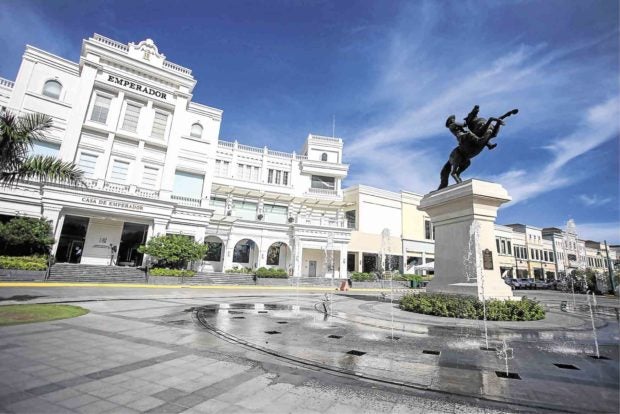 Valencia recalls looking at what he’s accumulated. “When I started evaluating my collection in 2011 and 2012, I really started dreaming of and aspiring to have a family museum that not only could house the collection, but also with the view that our family could share and make the works accessible to the Iloilo community as our family’s legacy to the city we love.

“As I continued to add to the collection, I also started to collect larger, museum-size pieces. On my visits to the major museums in the United States and Europe, I was always in awe of the larger-than-life art pieces I would see, which in my own mind, were appropriate for a museum. A large artwork creates more interest and discussions when you’re with a group of people, and you have to step back to admire the work and share your views and opinions and create a dialogue.

“I remember the first time I went to the Louvre in Paris, and I could only make a quick view of the Mona Lisa, as there was a big crowd in front of the smaller size masterpiece!

“With the growing size and scale of my collection, I realized it would be a major undertaking to build a large museum, hence the idea came about of partnering with an organization or a company that would be willing to build the infrastructure and house the collection.”

In 2014, he met Kevin Tan, then the head of Megaworld Lifestyle Malls and now the CEO of Alliance Global Group. Tan told Valencia that Megaworld was looking to open a museum in Manila and would seriously consider building one in their Iloilo township.

“And that’s how Ilomoca was conceived and realized!” Valencia notes.

“A particular artwork’s value to me, as simple as it sounds, is the pure and sheer enjoyment it gives me when I look at it. The artworks I collect are mostly those that push one to think and contemplate, those that create new perspectives, new insights, new narratives when I look at them again and again. The old adage perfectly works for me—art is  nourishment for the body, the mind and the soul! And I say this with all candidness—I would never lose sleep if nothing in my collection ever goes up in monetary value!”

The Ed Valencia collection housed in the spacious third floor has been drawing visitors to the Iloilo Museum of Contemporary Art (Ilomoca), which houses also significant works of contemporary Filipino artists, particularly from the Visayas.

Valencia and his family want to leave a legacy to the city, the arts community, as well as to future generations. The museum hopes to expand the circle of contemporary art supporters and influencers in a setting conducive to engagement and interaction.

The Ilomoca is devoted to contemporary art by Filipino and foreign artists. Supported by Megaworld Foundation, it occupies three stories of the Casa Emperador Building, Iloilo Business Park, in Mandurriao, Iloilo City.

By creating public spaces for private collections such as Valencia’s, the Megaworld Foundation has led the way in adding a robust cultural dimension to the city of Iloilo and the Western Visayas region. –CONTRIBUTED