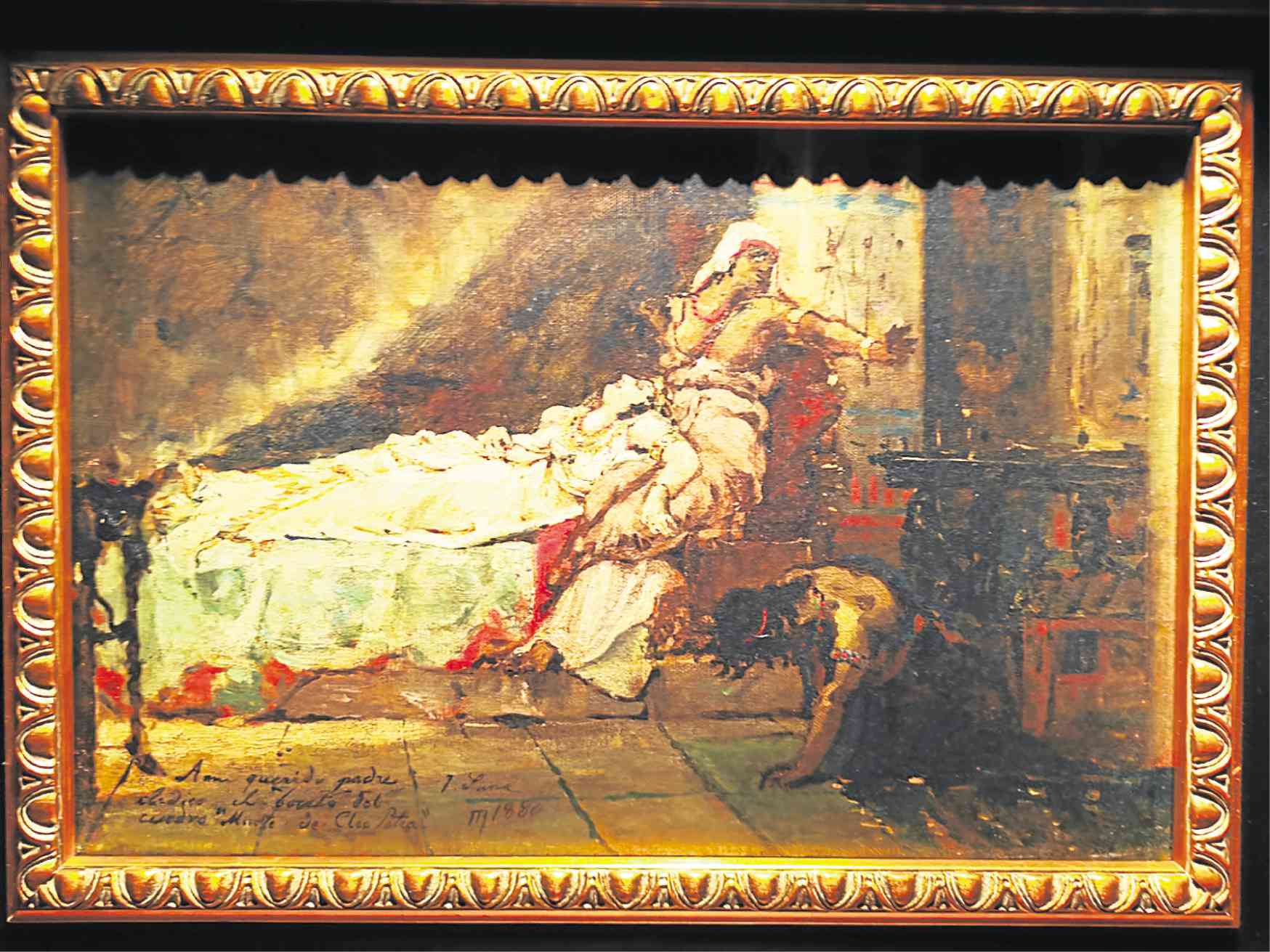 Salcedo Auctions to bid out ‘boceto’ of Luna’s ‘Cleopatra’

The actual work won the silver medal at the 1881 Madrid Exposition of Fine Arts; this was three years prior to the “Spoliarium” winning the gold in the same expo.

Salcedo Auctions director Richie Lerma said the oil-on-canvas boceto is signed and inscribed by Luna with a dedication to his father. It came from the collection of the late Dr. Eleuterio “Teyet” Pascual (1936-2012), added Lerma.

Pascual is widely recognized as one of the most significant collectors of Philippine art and antiquities.

Copy was last seen at the Luna and Hidalgo retrospective exhibition held at the Metropolitan Museum of Manila in 1988.

“The significance of the Cleopatra boceto in Philippine art history is that it provides the link between the 1874 painting by the French artist Rixens that inspired the award-winning 1881 mural-sized work,” Lerma said. “As the Prado Museum curator Carlos Navarro said, ‘Cleopatra is a political statement, as the Egyptian queen’s refusal to be captured alive by the Romans may be seen to represent the Philippines defiant stand against being enslaved by its colonizer.’”

Another Luna piece, the much larger “The Hunting Party,” shows two men (one on horseback), accompanied by three dogs.

Lerma cited the analysis of Jilleen Nadolny of Art Analysis & Research in London, which confirmed its attribution to the artist. Nadolny reportedly said that the 1890 work could be read as a valedictory metaphor for revolutionary struggle and camaraderie near the end of Luna’s life.

Also to be auctioned off is one by Luna’s contemporary—Félix Resurrección Hidalgo’s “Draped Nude, Reclining in a Forest Landscape.”

Presumed to be the work referred to in the 1893 Exposicion Historico-Natural y Etnografica in Madrid as “En la soledad del bosque” or “In the solitude of the forest,” this is a rare, circa 1880 painting that depicts the communion between humanity and nature.

The auctions house said Hidalgo and Luna’s “Hunting Party” are from the estate of the late Doña Maria Nuñez Rodriguez (1911-1992), specifically from the branch of her family that used to own “Espana y Filipinas,” now in the collection of the National Gallery of Singapore.

Nuñez Rodriguez was the widow of Don Francisco Vazquez Gayoso, who in turn inherited the paintings from his father, Don Jose Vazquez Castiñeira, who was the mayor of the northern Spanish town of Sarria in the late 19th century.

The three highlight pieces were unveiled at the by-invitation viewing hosted by Vicki Belo, the cosmetic physician, in her Forbes Park home.

Guests, who were chauffeured to the venue in limousines by BMW were treated to an art-inspired five-course meal prepared by Happy Ongpauco-Tiu and Aleth Ocampo,  paired with drinks by Moët Hennessy, which included the Hennessy Paradis Imperial.

Accompanying this piece is a 1971 work in marble by Napoleon Abueva, “Father of Modern Philippine Sculpture,” featuring three birds perched closely amongst each other, symbolizing peace, balance and unity.

Also featured are pieces displaying the breadth of National Artist Ang Kiukok’s unique cubist-expressionist aesthetic. Pieces range from a charming portrayal of bananas from the modernist surge of the 60s with Luz Gallery provenance, and artistic interpretations of Christ Crucified and the Mother and Child motif that he has so expertly explored over the years.

In a playful departure from his neo-realist strain, Romeo Tabuena gives a whimsical post-impressionist treatment of a cactus, which sets this piece apart from the more exuberant chromatic paintings distinguishing his Mexican period.

Lao Lianben leads the transition to contemporary art with his large work on canvas entitled “Head and Zen” which displays his skill in the rendering of multiple subjects that are all unique in their own variations of ashy black and white, silent in frill yet still powerful in delivery.

Abstraction  plays on monochromatic hues to great effect in this work by Romulo Olazo from his “Diaphanous” series, and this acrylic on canvas work entitled “Blue Dream” by National Artist Jose Joya, both from 1976.

Also featured are works by National Artist BenCab, including a 1969 work from his “Scavengers” series and a 2001 painting from his “Larawan” series.

Works by contemporary artists in the sale include those by Ronald Ventura and Maria Taniguchi.

“I love the fact that the themes for this auction—that of revelation and transformation—go to the very heart not just of the art that we show here at Salcedo Auctions but it’s the credo as well of the Belo Medical Group—the joy that comes from the realization of beauty that transforms, that moves, that helps us see the world in a different light and inspires us to be better people,” Lerma says. “Looking at the art and transforming to be better ourselves gives us this joy.” —CONTRIBUTED

Auction will be on March 9, 2 p.m., at the Salcedo Auctions Showroom, Three Salcedo Place, Makati City. Catalogue is available at www.salcedoauctions.com. Public preview is ongoing until March 8.