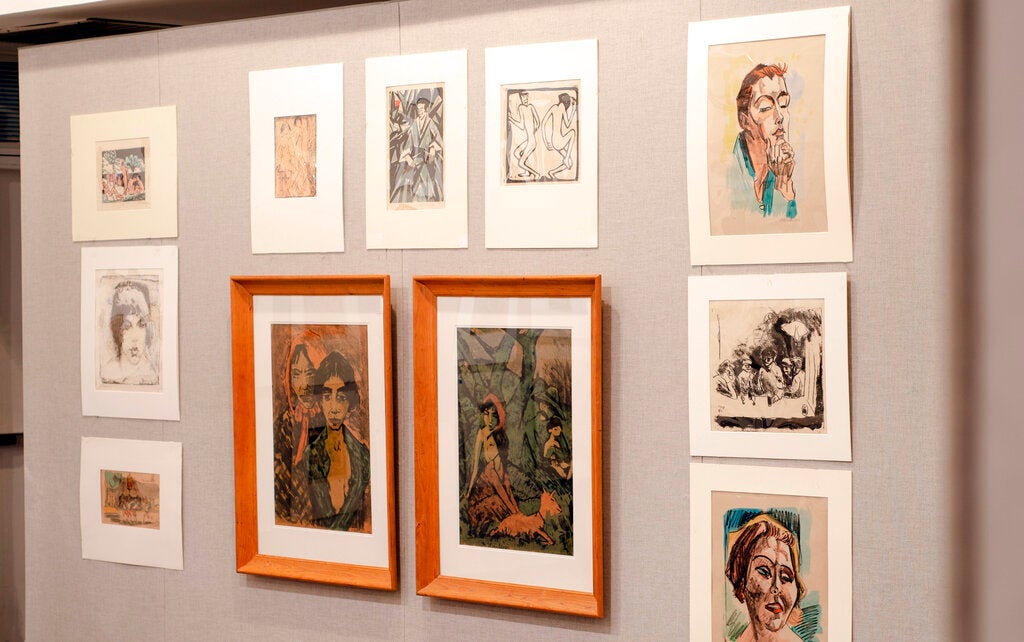 In this undated photo art is displayed that is going up for auction at Swann Auction Galleries in New York that were once part of a 6,000-piece collection amassed by a Jewish attorney in Germany before pieces were scattered and lost as the Nazis took over. The works collected by Ismar Littmann being offered Tuesday, March 5, 2019, at Swann are mostly drawings, etchings and lithographs. They were among pieces brought out of Germany before World War II by Littmann's son, who eventually settled in Texas. (Lauren Kristin/Swan Auction Galleries via AP)

Art collected by Jewish lawyer before WWII goes to auction

DALLAS — About 200 works of art from a Jewish lawyer’s collection that were spirited out of Nazi Germany to the U.S. are going up for auction.

The works collected by Ismar Littmann being offered Tuesday at Swann Auction Galleries in New York are mostly drawings, etchings and lithographs. They were once part of a collection of about 6,000 pieces he amassed. The works being auctioned are pieces brought out of Germany before World War II by Littmann’s son, who eventually settled in Texas.

Todd Weyman, auction house vice president, said the collection is notable for its singular focus on German works.
“His collecting was very optimistic for what was to happen,” Weyman said. “He was looking forward to putting together this great German collection.”

The civic-minded collector in Breslau, which after World War II became the Polish city of Wroclaw, co-founded the Breslau Jewish Museum in the city that had a thriving art scene. Littmann was friends with many of the artists whose works he acquired, including Otto Mueller and Heinrich Tischler.

But with the Nazis in power, restrictions on Jewish lawyers led to the demise of Littmann’s practice. He killed himself in 1934.

His son, Edward, who changed the spelling of his last name to Littman, immigrated to the U.S. in 1933. He returned to Germany after his father died and was able to ship around 800 works back to the U.S., said Edward Littman’s son, John Littman, 61, of Houston.

John Littman says there’s no way to know how much of the collection, which had a focus on German Expressionism, still exists. He says some pieces were confiscated, some destroyed and some sold under duress. The auction house notes that when Ismar Littmann’s widow consigned about 160 works to a Berlin auction house, the Gestapo seized 64 of the works — 11 went to a museum and the rest were burned.

John Littman said the family has worked to get around eight pieces restituted.

Weyman points out that the pieces that remain were those that were “most transportable, the works that were flat works on paper.”

John Littman said his father served in the Army during World War II in Europe. Edward Littman eventually settled in Wharton, located about 60 miles (96 kilometers) southwest of Houston, and, like his father, practiced law.

John Littman said his father, who died in 1970, built special cabinets in his attic for the artwork. “He spent a lot of time with the collection through the years,” he said.

“It was very personal to him,” Littman said. MKH

Historian lays out vision for new Holocaust museum in Warsaw