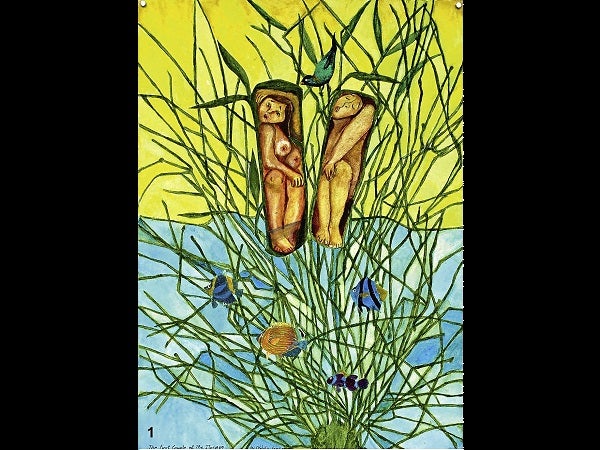 1. “Bamboo Birthing.” In the beginning, there were two gods: Captan, the land breeze, and Maguayen, the sea breeze. They challenged each other’s abilities but eventually fell in love.

On the seashore where they made love sprouted a reed. It grew into a tall spiny bamboo and broke into two. Out stepped Silalac and Sicavay. Some feminists have debated on who stepped out first and was therefore superior, the male or the female. So I painted them coming from same node, still sleepy, but together.

2. “The Tree of Knowledge of Good and Evil.” Adam and Eve were banished from paradise not because intercourse is a sin but because (according to mystics) it is also a short cut to higher knowledge and the divine. God believed the pair weren’t quite ready for that.

3) “The First Family.” Adam and Eve and Abel and Cain and the family of animals they lived with when time began.

4) “Filipino Biscuit.” One day there was a commotion in the celestial kitchen. The Divine Mother, who loved to cook, had baked three large biscuits. The first was burned black and it was the Negro. The second was pale and underbaked. That was the Caucasian. The third cookie came out just right—a perfect golden brown. Naks, that was the Filipino!