How do you raise a Scarlet Snow Belo? | Inquirer Lifestyle ❮ ❯ 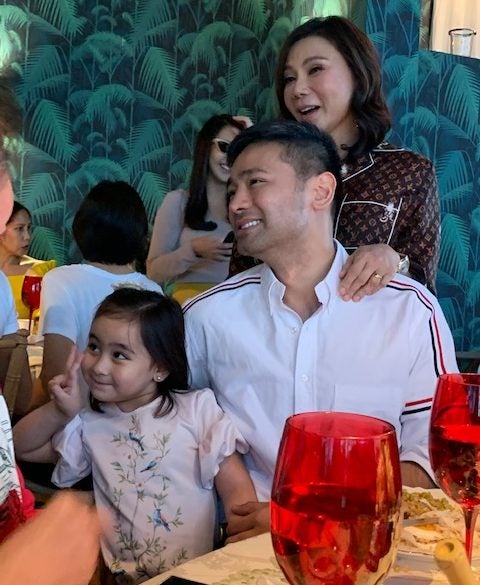 How do you raise a Scarlet Snow Belo?

Scarlet Snow Belo, arguably the country’s most famous baby, turned four last Sunday, and had her fun birthday party that brought together grownups and kids in a seamless, private way.

With 3 million followers on Instagram, Scarlet Snow, the adorable daughter of Dr. Vicki Belo and Dr. Hayden Kho, is a digital presence some people —many people—can’t seem to have their fill of. Not only is she pretty and huggable—don’t you get the urge to pinch those rosy cheeks—she’s also smart, quotable (yes, for a tyke), a natural before the camera whose presence she really wasn’t aware of—thanks to a protective dad and mom—until recently. Now she’s already aware when she’s being recorded on video—and decides when she wants it or not.

We didn’t realize fully just how habit-forming her digital pull has been until a matron at the reception of a country club, seeing I was checking Scarlet’s IG, asked me pointblank, “Do you know her? I can’t start my day without seeing what she’s up to.” Whoa, some addiction.

Last Sunday’s party was hosted by Virgie Ramos, who’s a friend of Vicki and Hayden, at Swatch building. Aside from building a brand (think Swatch), Virgie’s core expertise is building a guest mix, no matter the occasion. This, she did again, drawing in, on a Sunday no less, her cozy coterie of Swatch ambassadors—Matteo Guidicelli, who came with girlfriend Sarah Geronimo (is 2019 it?), Anne Curtis with hubby Erwan Heussaff.

There were games and prizes—Virgie is a details person like no other, and Scarlet called it “the best party ever” —straight from the mouth of a babe, meaning it was that happy.

By the way, in the Swatch Group is Flik Flak, the world’s best-selling children’s watch that has been selling here as well for some time.

Created in 1987, Flik Flak is teaching time in a fun way, crafted by education specialists. It combines education and fun and design. Flik is a blue-and-white big brother who indicates the minutes, Flak is the red little sister indicating hours. The blue-minute Flik chases after the red Flak around the dial. Like a teacher aide, if you ask me.

We asked Vicki and Hayden—how do you raise a most celebrated child, who’s sought after by a cross-mix of the population, from big business to regular moms?

The power couple gave firm answers, which a lot of parents will agree with. They enumerated:

“1) Carve out a non-negotiable time for your child. And during that time, minimize side conversations, put away your phones.

“2) Take regular vacations in private locations outside the city or maybe even out of the country where she can run around and play without strangers interrupting.

“3) You may outsource most things, but never outsource the moral education of your child. If you have only an hour to teach your child something, teach her about God, morality, accountability and charity. That will give her a good foundation in life.”

Older parents like us couldn’t have said it better. I’ve seen Scarlet with her parents up close quite a few times, from here to Paris, when the couple got married. Quite telling to me is how Hayden hoists Scarlet up his shoulders and lets her ride on those high shoulders, when in a crowd or doing the mall—a high perch. Given that he stands above 6 ft, that’s really a giant of a father protecting his child from strangers, quite literally.

I remember what architecture topnotcher Marc Henrich Go told me. He’s turned to photography (he launched his coffeetable book on Manila Cathedral yesterday) and has traveled with Scarlet, Vicki and Hayden, shooting the family. “She’s a very kind kid,” he said. “You see it the way she treats her yaya. She always says please and can be malambing with them.”

If ever multi-hyphenated persona (talent manager/PR/ eventologist) Jojie Dingcong is able to pull in an amazing mix of women and men to his birthday lunch every year, it must be because he’s become a go-to person for many of them practically every day of the year. He’s like a pillow—a noisy one, take note—you can hug all year round, or cry on, or when an occasion calls for it, a pillow you can fling on your opponent, bull’s eye. Or, he can just be fun.

It was no surprise that on that Monday, Feb. 18, it was almost perfect attendance at Manila House when his best friend, Dr. Vicki Belo, hosted a chic birthday lunch for Jojie, with ultra-rich keto dishes at the buffet arranged by Anton San Diego and his Manila House team.

It was relaxed, casual and stylishly happy, starting with the tablescape of spring flowers and red glasses.

Early guests were Rajo Laurel, whose table with Pepper Teehankee I couldn’t join because I was so absorbed listening to Menchu Katigbak’s latest dish. Pops Fernandez, fresh from her Hollywood stint, also came early, and so did Derek Ramsay, who was there with his folks. One by one, they streamed in—Kit Zobel looking so stylish in a summer printed dress, Menchu Soriano, Alice Eduardo and sisters Small Laude and Melba Solidum, Maricris Zobel, Carol Garcia, Irene Francisco, Babette Aquino Benoit, Renna Hechanova Angeles, Lizette Cojuangco, Gina Roxas, Sofia Elizalde, Michelle Tiangco, Ana Lorenzana de Ocampo. Even Cathy de Guzman, who’s usually traveling, made it. Sigalit Djemal, now based in Tel Aviv, was also there. And so were Sharmila Hiranand,  Karen Santos, Ching Cruz, Agnes Hibonhua, Sheila Romero, among others.

There was quite a number of tables to fill, and the women and the few men filled them.

At the buffet were the 16-hour roasted beef belly, the salt-crusted baked apahap fish, cochinillo with liver sauce, and the adobo rice paellera (try this at least once in your life) and the pancit palabok bar. So this is keto. (Who could say no to such diet?)

The lunch’s highlight was when Vicki and Scarlet Snow helped Jojie blow the birthday candles. Then Jojie said the magic words, the buzz now in the beauty grapevine—kinetic facelift, the latest non-invasive procedure that lifts your sagging jowls, cheeks, with hardly a downtime.

That’s so Jojie, who was social media unto himself long before the era of social media, and #nofilter at that.