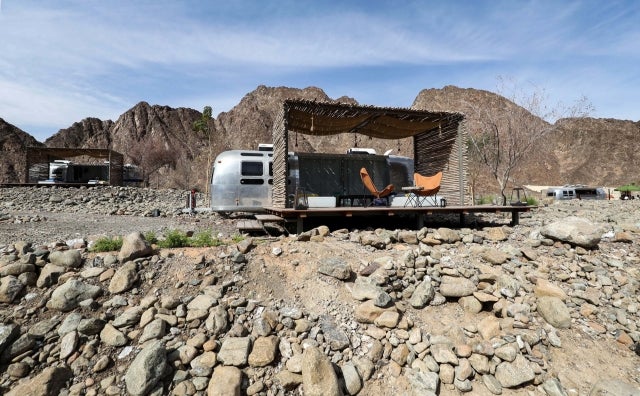 This picture taken on February 15, 2019 shows a view of a tourist caravan camped at a mountain campsite in the Dubai emirate's exclave of Hatta, near the Omani border. Some 100 kilometers from Dubai's skyscrapers, "glamping" in luxurious trailer-style set-ups and mountainside lodgings is the next big thing in the desert country. Betting on tourism at a time of low oil prices, Dubai has pushed a blend of camping and luxury hotels — "glamping," short for "glamorous camping." The city welcomed a record 15.92 million visitors in 2018, many of whom were drawn to its mega malls, luxurious hotels and pristine beaches. Image: AFP/Karim Sahib

Just over 100 kilometers (62 miles) from Dubai’s skyscrapers, Mohammed al-Kaabi strolls through the tranquil desert with his friends as the sun sets.

Kaabi, 27, hails from a long line of Emiratis, a people with a centuries-old bedouin history tied inextricably to the local desert.

Today, he is among a fast-growing group drawn to a new wave of a tradition of desert camping but with all the trappings of comfort, style and modernity.

With “glamping,” short for “glamorous camping,” Dubai aims to expand on its renown for luxurious city living and its tradition of camping.

Betting on tourism at a time of low oil prices, Dubai is now offering stays in chic desert trailers, in plush mountainside lodgings and beach camps, as it seeks to put its own mark on the glamping trend that has swept world tourism destinations.

“This place is far from the cities and the high-rises,” said Kaabi, sporting the traditional full-length white Emirati robe worn by men.

“Camping is very popular in the UAE, but when you want to bring the family it becomes more complicated,” he added, at a campsite in Hatta, near the Omani border.

“But here, safety and comfort are provided for.”

A room with… a bed

Camping is still a beloved way of life for many Emiratis, who take their equipment and head for the desert from the fall months onwards, when the scorching summer heat has faded.

Tourists and expat residents also increasingly opt to escape the hustle and bustle of the city.

Dubai welcomed a record 15.9 million visitors in 2018, many of whom were drawn to its mega malls, luxurious hotels and pristine beaches.

It hopes to push the figure up to 20 million visitors annually by next year, when it hosts the six-month global trade fair, Expo 2020.

The mountainous eastern Hatta desert has lots to offer “glampers” with a taste for adventure but also for their home comforts.

Near the Hatta dam, campers have a choice between a trailer, caravan or five-star lodge fully equipped with TVs and power points for charging a smartphone.

Seated outside a trailer, Jamil Fahmy, a Dubai resident from Saudi Arabia, said glamping was the perfect way to escape the city without compromising on hygiene.

“It’s fun, with the fire and hanging with friends and all that, but I personally prefer to sleep in a room with a bed and a private bathroom, and that’s what we get here,” he told AFP.

“It’s great to be an adventurer and explore and cook fireside, and that’s what we did. But when the time came, we retreated into the beautiful room and slept on a bed.”

Rooms with modern amenities, including bathrooms and beds, start from 400 dirhams (about $110, 100 euros) per night at the Hatta site, which opened in October.

The Hatta camping project, part of Dubai’s plan to use tourism to diversify revenues, is also home to a 350-meter zip wire.

Last year, Dubai faced a downturn in the real-estate market due to a supply glut, while oil prices also dropped, affecting the UAE as a whole.

Several glamping sites, some on the beach, have popped up across the UAE in recent years, with options to participate in yoga classes, star gazing or kayaking.

For Jay, a 37-year-old Briton, glamping offers a new experience after a decade in the UAE.

“We’re fairly outdoorsy, we came here kayaking before, we did the big zip line,” he told AFP, referring to the Hatta zip wire.

But, he added with a laugh that with the usual no-frills style of camping “you haven’t got a shower or all the facilities” so glamping is a welcome step-up.

“You get the outdoors and all of that, and nature, and you can barbecue — but you can also have a shower and get clean! It’s not five-star hoteling, but five-star camping.” CC

Glamping catching on: Outdoor fun with all the indoor creature comforts