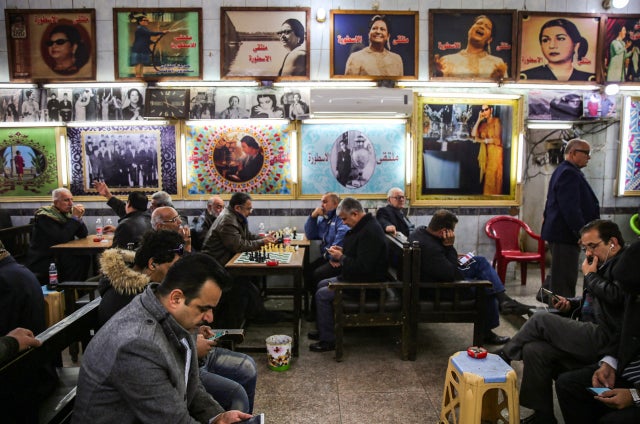 Iraqi men gather and socialise at Umm Kulthum Cafe on Rasheed street, the oldest street in the capital Baghdad on January 20, 2019. Behind the dilapidated storefronts and collapsing colonnades of Rasheed Street lie the treasures of the Iraqi capital's cultural boom years but with young Iraqis listening to modern music and spending hours in hipster-style coffee shops, the boulevard that bustled non-stop in the 1970s is at risk of being passed over. Image: AFP/Sabah Arar

But with young Iraqis listening to modern music and spending hours in hipster-style coffee shops, the boulevard that bustled non-stop in the 1970s is at risk of being passed over.

Authorities have tried to revive the street in recent weeks by removing the security checkpoints and concrete blast walls that lined Rasheed for years.

Despite his government’s best efforts though, it may be reduced to only that.

Decades ago, the street’s Umm Kulthum Cafe was packed with wistful young men listening to the sultry voice of its namesake, the Egyptian “queen” of Arabic music.

“Coming here was a daily tradition for us. We used to have a lovely time,” reminisced Abu Haidar, a retired army serviceman in his seventies.

It was so busy that customers — writers, men on their way to or from work, and those seeking solace in the music — struggled to call over harried waiters to order muddy coffee and sweet Iraqi tea.

Now, it only fills up on Saturdays, the traditional day for meeting up with friends in cafes, when older men chain-smoke and sip hot drinks on wooden benches under framed portraits of Iraq’s unseated king, Faisal II.

“After all these years, this coffee shop is the only place we can go to remember,” said Abu Haidar. “We hope it can escape extinction.”

Some date the street’s deterioration back to the 2003 US-led invasion that toppled dictator Saddam Hussein.

“You wouldn’t find the old pioneers, who used to sit in the coffee shop and actually understand Umm Kulthum’s songs.”

The invasion and sectarian violence that followed saw several bombs planted near Rasheed Street, with the last explosion in 2016 killing more than two dozen people.

Other historic areas of the capital similarly fell into disrepair during the years of bloodshed, with Baghdadis often filled with nostalgia for the past.

The floor of the abandoned Mekki Awwad theater, further south in the capital along the winding Tigris River, is blanketed in dust and litter.

It once hosted boisterous nighttime shows, but the rows of numbered seats have not been occupied in years.

Art galleries dotting the neighborhoods between the theatre and Rasheed Street have shuttered their doors one after the other.

As one of Baghdad’s first cinemas, Al-Zawra had long been a legendary stop along Rasheed — but it too lies unused now.

Last year, young Iraqi artists organized a walking tour through their capital in an effort to revive some of its historic districts with their own art installations.

Along the tired two-storey buildings of Rasheed Street, one photographer hung new versions of decades-old pictures of Baghdad’s heralded past.

But instead of looking up at the photographs, most shoppers were more interested in the tables selling watches, shimmering carp and fake Adidas.

Another Umm Kulthum-themed cafe has opened on Rasheed, choosing one of the singer’s nicknames — Al-Ustura, or The Legend — as its name.

Although its traditional yellow-brick walls and stained glass windows are “falling into ruin,” the original Umm Kulthum is soldiering on, said Said al-Qaissi, 65.

“No one has considered renovating or preserving this place which celebrates art,” said Qaissi.

While the cafe’s elusive owner rarely makes a public appearance, young waiters dish out tea to older gentlemen in sweaters and berets, lost in awe of Umm Kulthum’s voice and their own distant memories. CC