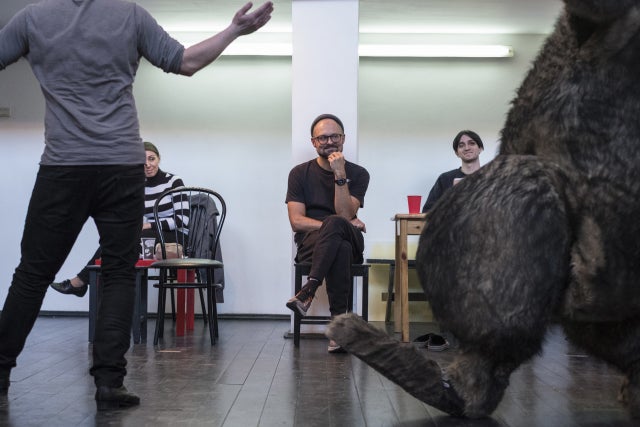 Russian stage director Maxim Didenko leads a rehearsal of the musical, called "Run, Alice, Run", in Moscow on January 23, 2019. In a Moscow theater, an unusual adaptation of the British classic children's book Alice in Wonderland has the audience erupting in laughter. It is one of many bold performances staged in the Russian capital, where contemporary theater with a political twist is booming despite a recent crackdown by the authorities. Image: AFP/Nikolay Korzhov

In a Moscow theater, an unusual adaptation of the British classic children’s book “Alice in Wonderland” has the audience erupting in laughter.

The musical sees Alice escaping from prison with the help of the White Rabbit and traveling through a Wonderland that turns out to be a lot like today’s Russia.

Nearly every scene is a parody of modern life in the country, from the Caterpillar demanding Alice hand over her identity papers to the Queen of Hearts imposing a ban on “everything.”

It is one of many bold performances staged in the Russian capital, where contemporary theater with a political twist is booming despite a recent crackdown by the authorities.

“It’s hard to live in Russia if you have no sense of irony,” the musical’s director Maxim Didenko tells AFP.

“If you took everything seriously, you could go mad.”

Didenko has staged several surprising re-inventions of Russian and Soviet classics — many of them musicals that are elaborately costumed, humorous and often have political undertones.

Speaking in Moscow’s Taganka Theatre, he says the play — called “Run, Alice, Run” — was his reaction to the arrest of leading theater and film director Kirill Serebrennikov, which shook Moscow’s theater circles in August 2017.

Serebrennikov has since then been on trial accused of embezzling state funds. His supporters see the case as part of a growing clampdown on artistic freedom under President Vladimir Putin.

Siberian-born Didenko is one of many arts figures to attend the ongoing trial of Serebrennikov, whom he describes as a role model who “completely changed” Russian theater.

He says that even the courtroom is a drama in itself.

“It’s also a kind of theater. You leave your coat, take a seat and listen,” he says. “It’s like a performance.”

Didenko says that he strives for all his works to “reflect the reality” of today’s Russia.

But there are topics he steers clear of, such as religion, which he sees as “too sensitive” given Russia’s strict legislation on offending believers.

“I rely on my own internal compass, I hope that’s enough,” he says.

Boris Mezdrich knows the price that theatre directors can pay in Russia if authorities believe they go too far on stage.

In 2015, he was sacked from a state-funded theater in Siberia’s Novosibirsk after Church officials complained that his interpretation of a Wagner opera was offensive.

Speaking to AFP in the central Moscow theater, Mezdrich says his case and that of Serebrennikov have made Russian theater directors “think twice about their work.”

“We speak in a different language to the culture ministry,” he says.

The “very strict rules” from the Soviet Union are gone, but Mezdrich says there is a “new danger” from authorities on theaters, many of which are state-owned or rely on state support.

Bidding for state money is competitive, with the funding temporary and quotas set for numbers of productions. This puts strains on theater companies and keeps them under threat of funding cuts.

“This is useful in the economy, not in theater,” Mezdrich says.

But he remains optimistic about the future of Russian theater, saying it has historically managed to “adapt to changing conditions.”

The Soviet legacy left a huge network of state-funded theaters across the country that makes Russian theater unique, he says.

“We have over 600 theaters that receive at least some financing from the state,” Mezdrich says.

“There is nothing like this anywhere else in the world.”

Directors with whom AFP spoke describe a paradoxical atmosphere in Russian theater, in which pressure from authorities co-exists with a burgeoning of opportunities.

Actress and director Marina Brusnikina says that despite a push by conservatives for “going back to tradition,” Moscow’s contemporary theaters are “teeming with life.”

“You can get access, you can experiment,” the 58-year-old says. “Even with this terrible situation with Kirill (Serebrennikov), we are still working normally.”

She conceded that “there is a kind of totalitarian ideology around” in what she described as a “battle for people’s minds.”

But she says that that is nothing compared to the pressure theaters faced in the Soviet era.

“We have seen worse times.” CC