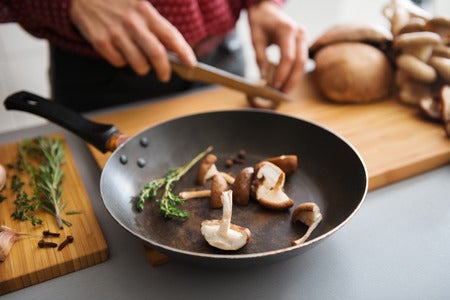 SINGAPORE — Eating more mushrooms could help keep mental decline at bay, a new study of more than 600 Singaporeans aged 60 and above has showed.

Researchers from the National University of Singapore (NUS) found that participants who ate more than two servings of mushrooms a week – equivalent to 300g or about half a plate – were 57 percent less likely to have mild cognitive impairment compared with those who ate less than one portion a week.

Announcing the findings on Tuesday (March 12), Dr Irwin Cheah, a senior research fellow at NUS’ Department of Biochemistry, said this could be because mushrooms contain high levels of a compound known as ergothioneine.

The compound acts as an antioxidant and an anti-inflammatory agent, and can protect brain cells from damage, Dr Cheah said.

In a separate 2016 study also involving Dr Cheah , the researcher found that having a deficiency of the compound could be a risk factor for neurodegenerative diseases like Alzheimer’s.

“Humans cannot synthesize this compound, but it can be obtained from dietary sources,” he explained.

Dr Cheah said the researchers measured a range of foods and found that many, including beans and liver, contain low levels of the compound.

Mushrooms, which are able to synthesize ergothioneine, were found to have very high levels of it.

The study was part of the wider Diet and Healthy Ageing research done in Singapore.

Those who were diagnosed with dementia or other serious mental conditions were excluded from the mushroom study.

The researchers also controlled the intake of other foods known to be correlated with cognitive function, such as vegetables, fruit and nuts.

The participants then took tests designed to measure cognitive abilities like memory and how quickly they can process information.

The scores were controlled for age and education levels.

Those who scored less than 1.5 standard deviations below the mean score of participants with similar ages and education levels were determined to have mild cognitive impairment.

About 90 out of the 663 participants fell into this category.

Mild cognitive impairment is the intermediate stage between normal cognitive decline, associated with ageing, and dementia, which is more serious and has no cure.

The study’s principal investigator, Assistant Professor Feng Lei, said: “With the increasing number of seniors, we can expect to see a potential dementia tsunami in the future. The good news is that cognitive decline can be managed.”

Prof Feng, who is from NUS’ Department of Psychological Medicine, said people with mild cognitive impairment can still perform most normal functions, and that the rate of decline can be slowed through dietary and other lifestyle interventions.

Tests showed that this group had lower levels of ergothioneine in their bloodstreams, which also correlated with their lower intake of mushrooms.

Prof Feng added that the researchers plan to conduct a clinical trial on the potential benefits of pure ergothioneine alone or in combination with other nutrients derived from plants in delaying cognitive decline.

If it is successful, the research could lead to the development of a supplement in future.