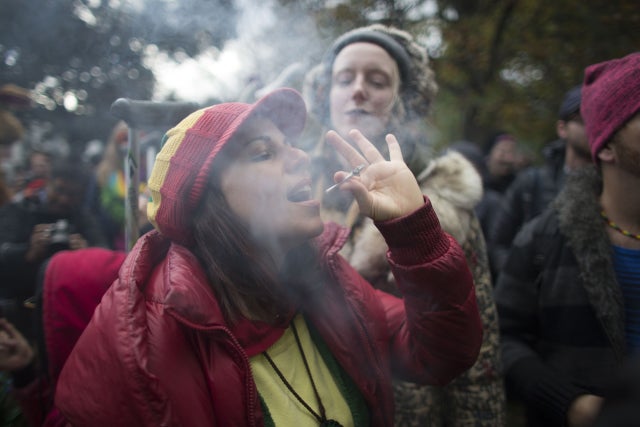 In this file photo taken on October 17, 2018, a woman smokes a marijuana cigarette during a legalization party at Trinity Bellwoods Park in Toronto, Ontario. Image: Geoff Robins / AFP

In Canada, some moms say cannabis makes them better parents

Smoking cannabis has made me “a better mother,” says Karine Cyr.

The mother of two leads a group of like-minded Canadian women challenging norms and rejecting stigmas around parenting and pot since Ottawa legalized its recreational use last October.

They are tired, she says, of having to hide their use of the mind-altering drug from family, neighbors and others, and have set out to educate their peers about its benefits.

“People are not informed. They still think that when we use cannabis, we sit in front of our television eating pizza like teenagers,” Cyr says.

Doctors disagree. But her message has resonated with hundreds of members of her Des fleurs ma chere (Flowers my dear) Facebook group, which she created to share experiences and thoughts about pot.

The group includes “entrepreneurs, psychologists, models, photographers … they are women from all walks of life,” said “ganja yoga” instructor Cynthia Petrin, herself a member.

Another similar Facebook group, “Mother Mary,” based in Montreal, has some 5,000 members.

Sitting in her living room, the smell of marijuana lingering, Jordana Zabitsky, in her 30s, said she started “Mother Mary” in a bid to push back against “mommy shaming.”

“I have so much on my shoulders — I am only one person. The cannabis allows me to accomplish my daily tasks so much better!”

Canada’s health ministry warns parents against consuming cannabis because of the risks of second-hand smoke, while warning it also “may reduce a person’s ability to pay attention (to their child), make decisions or react to emergencies.”

But Cyr argues that cannabis is a far better alternative than prescribed opioids or anti-depressants to treat anxiety or depression in new mothers.

“Moms feel lonely and do not know where to turn. They feel ashamed and afraid,” echoed fellow pot proponent Annie-Claude Bertrand.

Cyr began using cannabidiol (CBD) oil, made from a non-psychoactive compound in cannabis plants, after her second pregnancy to relax.

She refused to take opioids prescribed by her doctor that made her feel like a “zombie.”

“I wasn’t sleeping, I had big sleep disorders, (but) the first time I took CBD oil, I slept through the night like I used to,” she said.

According to the government statistical agency, 12 percent of Canadian women have used cannabis, compared to 19 percent of the total Canadian population.

And several studies show that the drug’s popularity among women in both Canada and the United States — where several states have legalized it — is growing fast.

Marketers have even taken notice and started targeting their products specifically to women and young mothers.

For women, said Zabitsky, who admitted to consuming “micro-doses” during her first pregnancy and daily when she was pregnant with her second child, “the top question is, ‘Can I use cannabis during pregnancy?'”

“Right before I went into labor, I smoked a really big joint, and it was fantastic. All my doctors knew,” she says, assuring that her three-year-old and one-year-old children are healthy and “too smart” for their respective ages.

Doctor Antoine Kanamugire, however, says marijuana is not recommended during pregnancy because “THC, the psychoactive substance, will cross the placenta, so the baby will get 10 to 30 percent of the dose consumed by his mother.”

“Cannabis can greatly influence the development of the central nervous system and the immune system of the fetus,” said the author of “The 21 Unspoken Truths About Marijuana.”

Those warnings, however, have not dissuaded Zabitsky and the other mothers in her group, who note that a century of prohibition has had the effect of throttling research into cannabis.

In her living room, she unveils THC-infused butter, sweets, soaps and skin creams for her guests, while touting cannabis as good for women’s libido.

“It’s like Viagra for women,” she says with a smile. NVG

Duterte now says of medical marijuana: ‘Not in my time’