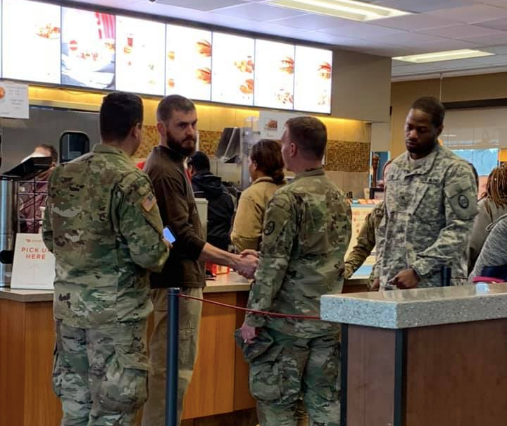 One man from Durham, North Carolina, did not think twice about buying meals for the soldiers who walked into the fast-food restaurant he was eating in.

Jonathan Full was with his brother Stephen and their children at a Chick-fil-A restaurant on Roxboro Road when two soldiers walked in. Stephen took to social media on March 9 and narrated how Jonathan got up from his seat and approached the soldiers to pay for their meal.

“As we were eating in Chick-fil-A, two military personnel walked in and began to order,” Stephen wrote via Facebook. “Jonathan immediately got up and went to pay for their meal.”

Proud big brother moment.. we took the kids out to eat and hit Costco up, so Nikki and Alex could have some time…

In the photos Stephen shared, Jonathan can be seen shaking the hand of one soldier as they stood in line.

“Little did he know, about nine more walked in,” Stephen said. “He didn’t even bat an eye and asked everyone in line to allow the nine to come to the front of the line.”

As Jonathan paid for the soldiers’ meals, he also told them to reach out to those they know are suffering from post-traumatic stress disorder (PTSD).

Joshua, Stephen and Jonathan’s late veteran stepbrother, suffered severely from the disorder after serving as a marine in Afghanistan. He took his own life just the week before, as per Yahoo! Lifestyle on March 12.

“We asked them to reach out to anyone they knew with PTSD and try their best to get them the help they needed. We thanked them for their service and left,” Stephen said. “Taught our boys to take care of the people that take care of us.”

The service members initially rejected Jonathan’s offer to pay for their meals, as per the report, but he was adamant because he wanted to give back.

“It was a way for me to express my gratitude for what they do and help me grieve for my brother…,” Jonathan said in the report. “Their first response was ‘it’s ok I can buy my own meal,’ but I didn’t accept that. I asked them to help anyone they knew in service that has PTSD.”

Jonathan has since taken to his Facebook to thank netizens for the outpouring support.

“I appreciate the sharing and kind words from everyone,” he said on March 13. “I would have loved for Josh to see this and know how much he was loved. He was a great man who checked out way too soon.”  Cody Cepeda /ra