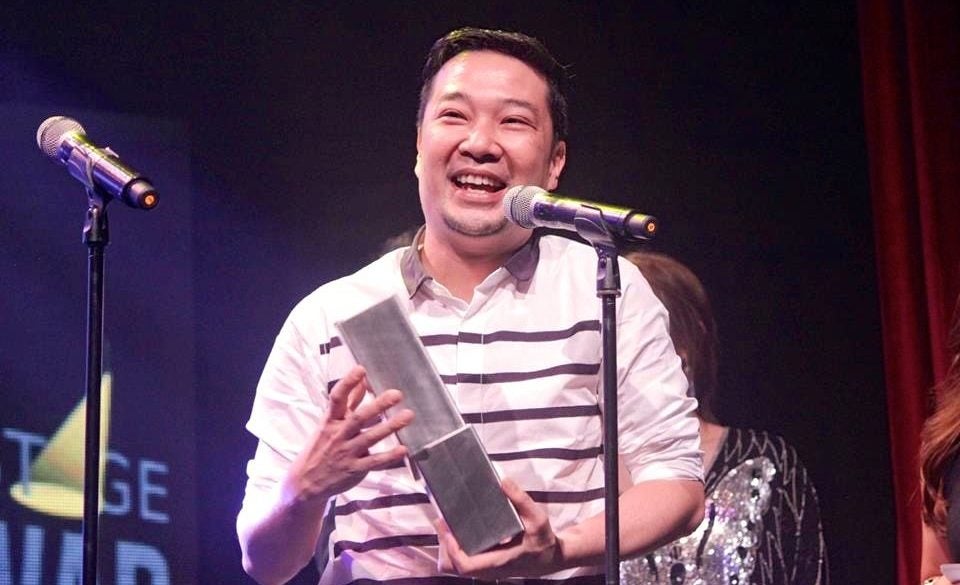 ‘He fell in love with how the littlest detail in his design would contribute to a play’s overall narrative, intentions, vision’

“He was an atypical artist—almost ego-free.”

Josef recalls, “During meetings with a production’s artistic team, he would listen intently and quietly to the discussions, especially between the director and playwright. Days after, he would just submit his interesting studies, which oftentimes immediately got the approval of his director.

“If his director wanted revisions, [Reyes] would go back to the drawing board with no sign of resistance, and return with even more appropriate designs.”

More widely recognized in fashion design, where his “edgy,” “conceptual,” “out of the box” approach marked him as an innovator, Reyes cofounded the Young Designers Group, and was secretary of the Fashion Design Council of the Philippines (FDCP) at the time of his death.
It was this “out of the box” perspective that Reyes brought to the stage, where his collaborations with Tanghalang Pilipino (TP), the resident theater company of the Cultural Center of the Philippines (CCP), spanned almost a decade, in productions ranging from children’s shows (“Sandosenang Sapatos,” 2013), rap musicals (“Kleptomaniacs,” 2014) to Shakespearean adaptations (“A Midsummer Night’s Dream/Pangarap sa Isang Gabi ng Gitnang Tag-araw,” 2016).

One can pick apart the hits and misses in Reyes’ body of work, but there’s no denying he was an artist who always made the viewer look and think twice: for instance, the Barong Tagalog amid archaic silhouettes in “Ang Pag-uusig” (2017), an adaptation of Arthur Miller’s “The Crucible”; or the panoply of blacks and whites that unexpectedly advanced the metaphors in the self-proclaimed rock sarswela “Aurelio Sedisyoso” (2017).
In the Philstage Gawad Buhay Awards for the Performing Arts, Reyes scored three nominations for costume design—one in 2017 for “Aurelio”; and two in 2015, for the steampunk musical “Mabining Mandirigma,” and “Juego de Peligro,” an adaptation of “Les Liaisons Dangereuses.” He rightfully took home the trophy for “Mabini”.
Playwright Layeta Bucoy, another longtime collaborator, says Reyes found fulfillment in, and was somehow even “addicted” to designing for theater. “Two years ago, he told me he was still in the process of exploring, that he was still learning but loving every moment of [designing for theater]. He fell in love with how the littlest detail in his design would contribute to a play’s overall narrative, intentions, vision.”
Reyes had just returned from New York, where he visited design laboratories, when work started on Bucoy’s 2017 Virgin Labfest entry “Si Dr. Dolly Dalisay at ang Mga Ladybugs.”
Bucoy recalls, “He patterned his design on NY labs. Then I had to remind him, ‘James, third world lab.’ He said, ‘Ay ganon? Akala ko pa naman ‘shabby chic.’”
The final Bucoy-Reyes collaboration was last year’s “Balag at Angud,” an original musical based on the life of protest artist Junyee. And like the show’s subject matter, who struggled with the poor reception of his early works, “[James] also went through that phase when he was a youngster, his drawings and sketches were called ‘kalat lang,’” Bucoy says. “That’s why he identified so much with [the show].”
The two collaborators had plans. “I asked him what would be most challenging to him as a designer, and he said if there’d be minimal props or set pieces onstage. So we agreed to come up with a play with only a pebble onstage,” says Bucoy.
A tiny stone for a set would have made quite the punch line to a career that traversed the last 30 years—one that incubated at the University of the Philippines-Diliman, where Reyes obtained his Fine Arts degree; burned up more than a decade in the advertising industry; even breaching the finals of the 2002 Paris Young Designers’ Competition; before finally landing on the theater stage.
For now, playgoers will have one more glimpse of Reyes’ work, as “Mabini” and “Aurelio” return to the CCP this August for a three-week rerun in repertory.
Reyes’ funeral wake is at St. Alphonsus de Ligouri Church, Magallanes Village, Makati City, until Wednesday, March 20.