Gloria Steinem: 'I was too worried about approval' | Inquirer Lifestyle ❮ ❯ 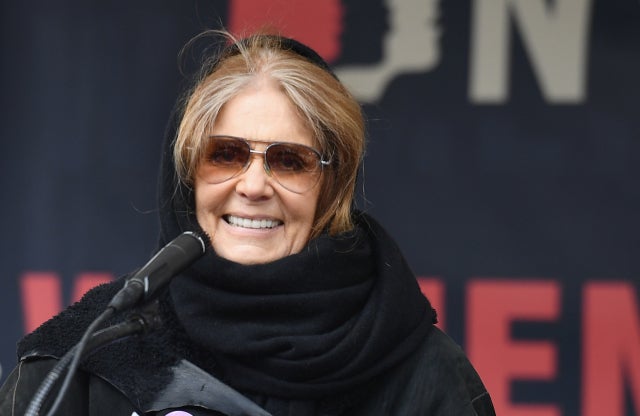 Feminist icon Gloria Steinem: ‘I was too worried about approval’

Feminist icon Gloria Steinem would not be so meek “or worried about approval” if she had her life again.

The veteran campaigner, one of the leaders of the American women’s movement in the 1970s and 1980s, told AFP that she regretted being too “hesitant” about doing what she knew was right.

“I would have done lots of things differently,” said the soft-spoken journalist and campaigner who was in Paris Tuesday to promote her memoirs, “My Life on the Road”.

“I would have done things faster. I would have been less hesitant. I knew what I wanted to do but I was a little worried about approval, especially when there was no (women’s) movement in my life,” she added.

“We just need to be whoever the fuck we are and just do it,” said the 84-year-old with a laugh.

“Not to be outrageous just to break a stereotype — because that is also dictating our behavior — but to do our best to be authentic and to be who we are and use our talents and refuse to be turned back,” she added.

Steinem appealed for women to talk and work together face-to-face as well as on social media if they were ever going to make the world a fairer place.

‘We are not alone anymore’

“But it is the only way forward,” she insisted. “That’s what movements are for: to make connections among people with common interests. To give us a family.”

Steinem said her own “big click” feminist epiphany came when she was working at New York Magazine in the late 1960s.

“I was ‘the girl writer,'” she recalled wryly.

“When I first covered an abortion hearing — which was a great revelation to me because I was suddenly seeing women talking about something that only happened to women and taking it seriously — my male colleagues took me aside one by one and said, ‘Oh, Gloria, do not get involved with these crazy women. You have worked so hard to be taken seriously.'”

The writer said that despite the regressive views of US President Donald Trump and other populist leaders, the feminist genie would never go back in the bottle.

“We are not alone anymore,” she told reporters. “It’s true that we are fighting a very, very entrenched establishment. We’re very economically unequal, we still are fighting the battle to control our own physical selves because that’s the definition of patriarchy, to control reproduction, and we happen to have a womb.

“But I think the role of older people like me is to have hope, because we remember when it was worse,” said Steinem, whose 2015 book is published in French this week.

She dedicated “My Life on the Road” to a British doctor, John Sharpe, who helped her obtain an illegal abortion London in 1957 when she was 22, “knowing only that she had broken an engagement at home to seek an unknown fate.”

His only conditions were that she should tell no one and that Steinem promise to “do what you want to do with your life.”

She says she has led her life out of suitcases since getting a job as a Playboy Bunny in 1963 to expose the way the women were exploited.

In the book she credits her father, a travelling salesman, for giving her both itchy feet and a sense of equality — despite the fact that he deserted the family, leaving his daughter to deal with debt collectors at the door.

She wrote that “he loved and honored me as a unique person. And that let me know that he and I — men and women — are not opposites at all.”

In her years of campaigning on birth control, social justice and violence against women, she said the words that helped keep her going the most came from fellow activist Wilma Mankiller, the first woman chief to lead the Cherokee Nation.

When Steinem asked how she dealt with the genocide of the Native American people, Mankiller would say, “We are still here.” CC