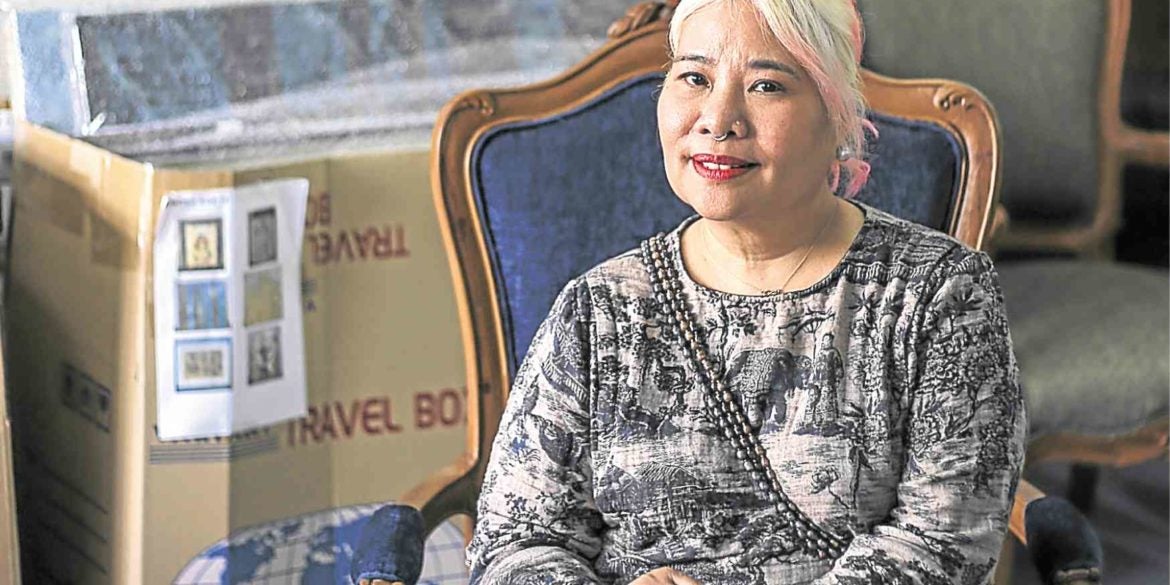 Plet Bolipata, in a mythic retelling of the heroine’s story, puts her in a dollhouse multimedia installation, on exhibit beginning today at HK art fair

The archetype of the woman warrior runs deep in the human psyche.

The ancient Brits had Boudica, who led her tribe against the Romans. The medieval French had Joan of Arc, who battled the English. And we had Gabriela Silang, the first in a long line of insurgent Filipinas, who led the Ilocanos in an armed revolt against the Spanish colonial forces in the mid-18th century.

“I saw her statue on Ayala Avenue, and she was just this tiny girl on a tiny horse, and I thought,  ‘We’ve kind of forgotten about Gabriela Silang,’” says multimedia artist Plet Bolipata.

“That was when it hit me: We should put Gabriela Silang back on the Philippine map, make her of this day and age so more people can relate to her.”

Bolipata says her first impulse was to “yarn bomb” Silang.

“Since I do knitting and crocheting, I wanted to make her prettier so people would notice her more,” she says.

The idea was quickly nixed, however. A heroine deserved a more heroic transformation, so instead Bolipata conceptualized a more mythic retelling of Silang’s story through a multimedia art installation, which she’s exhibiting March 26-31 at Art Central Hong Kong, one of the most important art fairs in Asia.

She will show her work with those of husband Elmer Borlongan and sculptor Daniel de la Cruz at Art Cube’s booth, representing the Philippine art scene in the international contemporary art world.

Bolipata’s Silang is of a piece with her “Little Red Riding Hood” multimedia tableau which she exhibited in the 2018 Art Fair Philippines, in that it also reexamines and reinterprets an archetypal feminine figure: the victim-turned-avenger.

The action will take place in a dollhouse, swathed in inabel —the traditional weave of  Ilocos where Silang is from.

Her story will be retold in stop-motion animation, visible through the various windows of the dollhouse, only in this case the rebels are cats and the Spaniards are rabbits. All this, as “Pilipinas Kong Mahal” plays.

Bolipata’s artistic choices go back to her childhood.

“When we were growing up in Marikina, my mom actually made us a big dollhouse,” says Bolipata. “My sisters and I used to sleep inside it, so the concept of a dollhouse has been ingrained in me since childhood.”

Regarding the mini-movies, she and her siblings used to act out little scripts that her older brother Jed wrote.

“We did a lot of storytelling through that art form,” she recalls.

As for the “yarn bomb” bit, she has been crocheting and knitting since she was small.

“I thought the dollhouse concept with weaving and crocheting would make Little Red Riding Hood more vibrant, more alive,” she says. She hopes the same will go for Gabriela Silang.

Though she started out as a painter, Bolipata has of late explored different mediums, both to break free of the limitations of the two-dimensional canvas, and to forestall the inevitable comparisons with her husband, who is a painter above all else.

In a way, Bolipata has been dodging comparisons with men all her life, being sister to music prodigies Jed (piano), Coke (violin) and Chino (cello) Bolipata.

She herself plays the piano, but says she didn’t like to practice.

“My father said someday I would have to support my brothers who are musicians, so I needed to get a ‘real’ education,” she recalls. “I’m a computer information systems graduate. I didn’t like it, but I went ahead and finished it.”

Art was the farthest thing from her mind. She was already midway through law studies at the Ateneo when she experienced her epiphany.

“I went to the house of one of my titos, [National Artist] Federico Aguilar Alcuaz, and when I saw his studio, I said: ‘Tito Freddie, I think I’m a painter.’ And he said, ‘Huh?’”

Bolipata bought paints, brushes and canvases and started painting every day after law school, basically teaching herself how to paint. It became an obsession, and even after her friends told her she had no talent and should give it up, she persisted in her folly.

Eventually, she dropped out of Ateneo, had second thoughts and reenrolled at San Beda law school, then dropped out again.

Under a pseudonym, she showed her portfolio to the proprietor of the Penguin Café and art gallery. Much to her surprise, they gave her a one-man exhibit. That was all the push she needed to commit herself fully to art.

She eventually went to New York to study art formally at the Art Students League of New York.

“A lot of my crooked ways got straightened out at the Art Students League,” she recalls. She learned composition, and the fact that the canvas had to be primed before painting.

Her computer science degree came in handy in landing her a day job in an accounting firm.

“That’s why I tell young artists to get a degree,” she says.

Coming home one Christmas, she was devastated to learn that she had lost her Untied States work visa. She was “stranded” in the Philippines.

In the meantime, her brothers Coke and Chino had established the Casa San Miguel art center in Zambales. They suggested she make herself useful by painting a mural there. They already had another artist working on a mural, they said, a guy named Elmer Borlongan.

“We both became artists-in-residence at Casa San Miguel, and things fell into place,” she recalls. “That was the destiny. When you feel your life is falling apart, that’s the time it is being woven.”