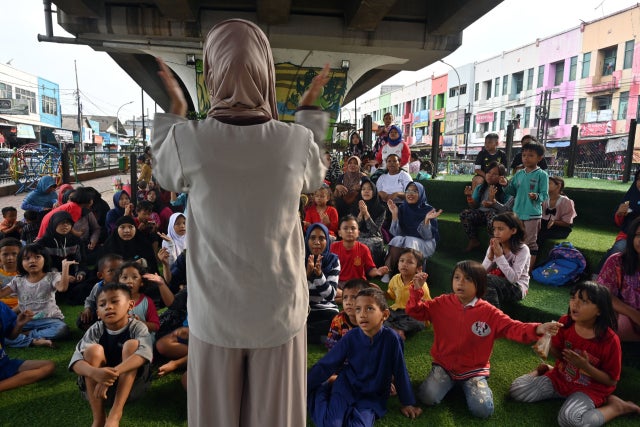 Singing and laughter briefly drown out the roar of cars under a Jakarta flyover, where an unlikely library for kids is thriving despite choking fumes — and opposition from menacing gangsters.

There’s no quiet rule at this open-air reading park wedged between two lanes of traffic just outside Indonesia’s capital, a city of some 30 million that is notorious for having some of the world’s worst traffic jams.

Despite its unlikely location, the Taman Baca Masyarakat Kolong has been a hit. A shortage of public libraries means it’s one of the few places where kids from this area can read books outside of school.

Several years ago, the flyover in suburb Ciputat, part of Jakarta’s greater metropolitan area, was strewn with rubbish and roamed by intimidating street thugs, Febrianti said.

But armed with books and paint, local organizations set about transforming its down-and-out reputation.

Artists painted murals on the walls, installed planter boxes and a futsal pitch, and a library with several dozen books was built on site.

Still, it wasn’t met with universal acclaim when it opened for business in 2016.

“In the beginning, not everyone was supportive when we came with books because there were already other residents here,” Febrianti said.

“We asked for forgiveness first from the gangsters who were here and then the ‘angkot’ drivers,” she added, referring to cheap and ubiquitous minivans that provide public transport.

Winning over parents afraid that their children would be kidnapped or hit by a car was no mean feat, either.

But eventually, parents — and even the street gangs — warmed to the idea.

Today, it’s not uncommon to see up to 70 kids attending after-school sessions, where they read stories with teachers, get help with homework, or sing and dance on concrete covered with green Astroturf.

Bookshelves are stuffed with hand-me-down kids books and some other less likely titles such as “Accounting” and “Glossary of Marketing Terms”.

“It makes me happy and it’s exciting,” she told AFP in a brief interview, before rushing back to join the other kids.

And it has won over parents like Salmih Usia, a 41-year-old mother of two.

“This is a great place for learning, creating and playing,” she said.

Some 80 reading parks have been established this part of the sprawling capital, although there is only one located right below a flyover, Febrianti said.

In Hong Kong, a small outdoor library that doubled as a children’s playground was set up under a flyover in the bustling city as part of research into how to better use community spaces, according to a report in the South China Morning Post last year.

Back in Indonesia, library volunteers admit the street-side location poses some potential health problems because of the fumes from traffic and the subsequent impact on air quality.

“But so far there haven’t been any complaints about the smell, rubbish or loud noises,” Febrianti said, adding: “We use a sound system, which is quite helpful for us to overcome the (noise) problem.” NVG

6 libraries in Metro Manila for your next reading break